In just six years, DKT Ethiopia has transformed its system for tracking contraceptive sales from pins and pencils to computers and satellites and, in the process, helped create a family planning and HIV prevention success story in the Horn of Africa. 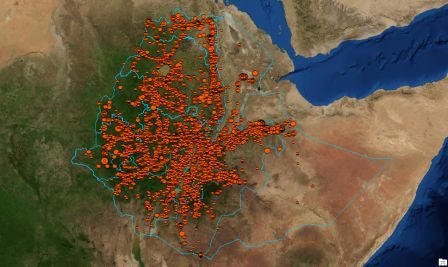 DKT Ethiopia is an affiliate of DKT International, a non-profit organization that seeks to provide couples with affordable and safe options for family planning and HIV prevention in 19 low- and middle-income countries. In Ethiopia, DKT uses social marketing to distribute three brands of condoms (and eight variants), three oral contraceptive pills, two IUDS, two injectables, one brand of emergency contraception and several other health products.

It was in 2007 that DKT Ethiopia started using GIS (Geographic Information System), a tool to display and analyze sales, finance and inventory information geographically and, particularly, to plot every one of its 30,000+ direct and indirect sales outlets. This has made an enormous difference in DKT's ability to know how its contraceptive sales are going in every corner of Ethiopia.

Before 2007, DKT used pins, pencils and Excel spread sheets to track this information, making it difficult and sometimes impossible to produce the desired information.

DKT field offices increasingly use GIS for routine reporting and monitoring of field activities, particularly sales. Through more efficient distribution activities that are tailored to local needs, DKT social marketers are able to increase access to health products and services among target groups, thus maximizing health impact. The map above shows the frequency of DKT Ethiopia sales contacts in 2012 using the GIS.

For example, DKT Ethiopia uses GIS as a tool to help its staff see where there are sales gaps. By looking at a map of Addis Ababa or one of the regions, it's very easy to see which areas are not well served. DKT also uses the maps for their rural social marketing activity where they have mapped out most of the market towns in the country (and the days they are held). The maps help with their logistical planning.

Over the last decade, Ethiopia has become a success story in both family planning and HIV prevention: It has more than quadrupled its Contraceptive Prevalence Rate for modern methods from 6.3 percent in 2000 to 27.3 percent in 2011. And, according to UNAIDS, Ethiopia decreased its HIV prevalence by 90 percent from 2001 to 2011, the greatest decrease of any country in Africa and second in the entire world (Nepal decreased its rate by 91 percent).

One of the ways DKT is able to make such a contribution to Ethiopia's family planning and HIV prevention efforts is by keeping a close watch on its sales performance and tweaking its efforts, where necessary, to maximize performance. GIS makes a major contribution to doing that.

DKT utilizes GPS (Global Positioning System), a technology that uses satellites to give one's exact position on the earth with the aid of a GPS navigation device. In the GIS, there is a field for entering the exact geographic location of the sales outlet.

Still the system is clunkier than it should be: Regional offices send paper copies of all the sales invoices to the Addis Ababa headquarters once a month to be entered manually into the system. Reports are then produced at headquarters and sent back to the regional offices.

The biggest challenge of the system is its inability to track "indirect sales," where DKT sells to a middleman like a wholesaler or an NGO. However, DKT is planning to enhance the recording and reporting of its Young Marketers, who are responsible for a majority of indirect sales to non-traditional outlets such as kiosks, hotels, supermarkets and pensions.

DKT now hopes to take their geographic positioning technology to the next level. They have already hired a consultant to study the efficiency, feasibility, cost-effectiveness and sustainability of equipping its sales team with smart phones to allow them to enter information on new sales outlets directly into the system, eliminating a huge amount of work for headquarters staff. The findings indicated that such a system is indeed feasible and DKT is now searching for specific technologies that would get them to that level.