When I wrote Part Iof "The Hand That Rocks the Cradle" nearly a year and eight months ago[1], the heartbreaking and outrageous scandal in the broken adoption system in Ethiopia was a shocking molestation crime committed against two recently adopted Ethiopian children -- one barely 2 and the other 4 years old -- by their French parents. The father was jailed for rape and violence, and the mother for failure to report a crime. The attitude of the Ethiopian adoption officials interviewed in that case was a nauseatingly indifferent, "S_ _ t happens!"

I was so incensed and dismayed by the responses of the adoption bureaucrats that I wrote in Part I, "The inattentive listener could easily mistake the interview of these bureaucrats as a conversation with commodities traders on the Chicago Board of Trade on a bad day than officials involved in caring for the most vulnerable children from one of the poorest countries in the world." Little did I know at the time how close I had come to the truth: I was indeed listening to some cold-blooded and pitiless bureaucrats from the Ethiopian Adoption Board of Trade! In a videotaped interview last week, an adopted child from Ethiopia said she and her two sisters were "sold" into adoption after Christian World Adoption (CWA) "paid" off their father. 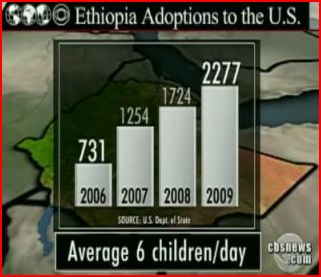 The official position of the dictatorship in Ethiopia is that most children adopted by foreigners are actually orphans, or abandoned and parentless street waifs; and but for the foreign adoptions, these children would likely die from neglect or hardship. That is simply not true. Many of the adopted children have parents and families, some of whom are relatively well off by local standards. The fact of the matter is that in Ethiopia there is a cottage industry in child trafficking under the cover of adoption. CBS News chief investigative correspondent Armen Keteyian last week charged that the adoption system in Ethiopia is so corrupt and those who operate it so crooked that "Ethiopia has turned into fertile ground for child trafficking."[2]

In the last year adoptions from Ethiopia to the U.S. have skyrocketed - growing faster than any other country in the world. They have risen from 731 in 2006 to more than 2,200 last year. That's nearly six children per day. Now a CBS News investigation has discovered that growth has turned Ethiopia into fertile ground for child trafficking - a country in which some American agencies and their staff engage in highly questionable conduct. Adoptive families allege that many children brought to the U.S. are not even orphans, that prospective parents are misled about a child's health and background, that local families are recruited - and sometimes even paid - to give up their kids.

The evidence uncovered by Keteyian showed three sisters -- ages 4, 6 and 7-- were adopted by an American family on representations by CWA that "their mother is dead, their father dying of AIDS [and]a life of prostitution is all but assured - if [they are] not adopted - saved - by a loving American family." Katie Bradshaw, the mother of the three children told Keteyian, "Aside from the gender of the children, everything else proved to be a complete lie." In fact, "the three sisters, Journee, Maree and Meya - were actually much older: 13, 6 and 11. While their mother was dead, their father was healthy and very much alive. He was living, by local standards, a middle-class life - an extended family able to take care of the girls as middle sister Meya showed us first hand." The Bradshaw's case is merely the tip of the iceberg of adoption horror stories in Ethiopia.

CWA was quick to throw the Ethiopian regime, its officials and judicial system right under a speeding bus. In a statement on its website, CWA denied any responsibility for factual misrepresentations and saddled the regime with full responsibility[3]:

An investigation is done by the children's home, the police, the Kebele (local elected officials), and the Ministry of Labor and Social Affairs (MOLSA). The police and the Kebele are responsible for investigating the relinquishing parent's claims... The determination as to whether a child is adoptable can only be made by a court through a formal, detailed legal process. It is not a determination made by a humanitarian aid organization, an adoption agency, or a child's community. It can only be made by the Ethiopian judicial system.


CWA, a non-profit agency established in 1991, "collected $6 million dollars - charging a fee of about $15,000 per child in 2008," the going rate in Ethiopia, according to the CBS investigation. But the Bradshaws and their three children have collected nothing but profound grief and sorrow: "We have watched our kids grieve and cry and scream and melt down from the bottom of their souls over the loss of their country and their family," declared Katie Bradshaw in despair.

The CBS investigation is not the first to reveal child trafficking in Ethiopia's corrupt adoption system. In September 2009, Mary Ann Jolley of the Australian Broadcasting Corporation (Aunty [ABC]) reported that the adoption agencies do not go to orphanages to get children for adoption but "harvest" them in the countryside and commoditize them[4] :

There was something incredibly disturbing about seeing international adoption en masse. All these [Ethiopian] children about to leave their country to begin a new life in a faraway place, disconnected from their heritage and culture... Foreigners prefer younger children - babies to five-year-olds. Older children or those with health problems are more difficult to pitch. So while many children languish in underfunded and overcrowded orphanages, some international adoption agencies are out spruiking [marketing promotions] in villages asking families to relinquish their children for adoption. It's a phenomenon known as 'harvesting' and it's shocking to see...There are more than 70 private international adoption agencies operating in Ethiopia... Almost half the agencies in Ethiopia are unregistered, some doing whatever they can to find children to satisfy the foreign market... No one disputes there is a real need for international adoptions, but for the sake of the children and adoptive parents there needs to be some protection from unscrupulous agencies who purport to be driven by humanitarian interests, but in reality are stuffing their pockets with dirty cash.

Partly based on the ABC investigation, in November 2009, the Australian Attorney General[5] "decided that the Ethiopia-Australia program should be suspended because of concerns that Australia can no longer conduct intercountry adoptions in Ethiopia in a manner consistent with its obligations under the Hague Convention on Protection of Children and Co-operation in respect of Intercountry Adoption." In a curiously phrased statement, the Attorney General explained, "A key reason for the suspension is a new requirement of the Ethiopian Government that the [intercountry adoption] program enter into a formal agreement to provide community development assistance." In other words, an agreement for a child trafficking-extortion racket in which development assistance is exchanged for Ethiopian babies!!

The documented fact is that there is a not-so-hidden cottage industry in Ethiopia that trades and traffics in children under the benign cover of charitable adoptions. The ruling dictatorship has been aware of the problem for several years but has failed to undertake a single investigation of the allegations in the media and individual complaints of adoptive parents, or identify and prosecute those involved in child "harvesting", trafficking and sale. It is inexplicable why the matter has failed to attract the slightest official attention: Could it be a manifestation of the regime's depraved and criminal indifference to the human rights of these children? Could it be because the regime does not believe it has moral responsibility for the welfare of these children? Or could it be that some powerful individuals are involved in the "harvesting" and commoditization of children?

The fact of the matter is that the dictatorship in Ethiopia has a legally binding duty under the Convention on the Rights of the Child (CRC) [Ethiopia adopted by accession on May 14, 1991] to ensure the welfare of these children. Under Art. 21 (d) of the CRC, the dictatorship has a mandatory legal duty to "Take all appropriate measures to ensure that, in inter-country adoption, the placement does not result in improper financial gain for those involved in it." Under Article 11 (1), the regime is required to "take measures to combat the illicit transfer and non-return of children abroad." (See also Article 19 (1) (2).) Under Article 13 (2) of the "Constitution of the Federal Democratic Republic of Ethiopia", the dictatorship has an obligatory duty to carry out its international treaty obligations and protect the rights of these children.

What must be done to save Ethiopian children from "harvesting" and commoditization?

Three things must be done immediately. First, the rule of law must be upheld. The dictatorship must live up to its mandatory and obligatory duties under its constitution, international treaties and its own criminal laws. The dictatorship has at its disposal all of the legal tools necessary to investigate and prosecute individuals and organizations involved in or suspected of child trafficking. Article 597 (1) (2) of the dictatorship's Penal Code imposes a prison sentence of 5-20 years against anyone engaging in "trafficking in women and children... by violence, threat, deceit, fraud, kidnapping or by the giving of money or other advantage to the person having control over a woman or a child..." Severe criminal liability also attaches to anyone who aids and abets in trafficking in children and women.

There is substantial evidence of criminal wrongdoing in the adoption process. Foreign adoptive parents would be willing to come forward and give evidence on the fraudulent practices used to sell children to them in the name of adoption. There is also evidence gathered by independent news agencies pointing to criminal wrongdoing by those involved in the adoption process. The dictatorship has a legal and moral duty to immediately suspend all adoptions and launch an investigation to determine the scope, severity and magnitude of the child trafficking problem, take appropriate measures to prosecute offenders and establish rigorous procedures that will prevent any future recurrences.

Second, action must be taken to deal with the structural defects in the adoption system by acceding (signing) to the Hague Convention on Protection of Children and Co-Operation in respect of Intercountry Adoption (entered into force 1995). Australia suspended its intercountry adoption program in Ethiopia because it concluded that the Ethiopian adoption system does not conform to or is in violation of the Hague Convention. The purpose of the Convention is "to establish safeguards to ensure that intercountry adoptions take place in the best interests of the child and with respect for his or her fundamental rights as recognized in international law" (Art. 1 (a)), and to "prevent the abduction, the sale of, or traffic in children" (Preamble). The Convention has been adopted by South Africa, Kenya, Togo, Mali, Guinea, Burkina Faso, Mauritius and Madagascar, among dozens of other countries.

Third, the regime must also sign the U.N. Protocol to Prevent, Suppress and Punish Trafficking in Persons, Especially Women and Children, supplementing the United Nations Convention against Transnational Organized Crime ("Palermo Trafficking Protocol", entered into force, 2003). The Protocol, among other things, requires signatories to criminalize the trafficking of children for sexual exploitation, facilitates return and acceptance of children who have been victims of cross-border trafficking, and provides for the confiscation of the instruments and proceeds of trafficking and related offenses to be used for the benefit of trafficked persons. Some 118 countries have adopted the Protocol including Kenya, Uganda, Djbouti, Niger, Sierra Leone, Cameroon, Rwanda, Burundi, The Congo, Sierra Leone and dozens of other countries.