While the Arizona state legislature moves along two bills that will legally place guns and Bibles into public school classrooms, one Mexican American Studies teacher approached Tucson Unified School District administrators today with a simple request on the eve of the state's centennial celebrations: Release the locked up Mexican American Studies textbooks, so Tucson children can learn their state's full history and rich heritage.

Delivering a petition to TUSD administrators with over 15,000 signatures, Gonzalez' initiative comes amid an extraordinary national outcry by virtually every major teacher, educational, publishing, literary and library association for Tucson to come into compliance with basic academic and intellectual freedom rights and end the indefinite detention of hundreds if not thousands of books removed from Tucson schools, as part of the "suspension" of the school district's acclaimed Mexican American Studies.

The bottom line: Should approved textbooks and novels, memoirs and history books, such as the nationally acclaimed Rethinking Columbus, a largely Native American text that is used in mainstream American social studies courses across the country, sit on the floor of a storage locker or should they be displayed and circulated in libraries until the disgraced Tucson school district faces a Special Master under federal desegregation orders? 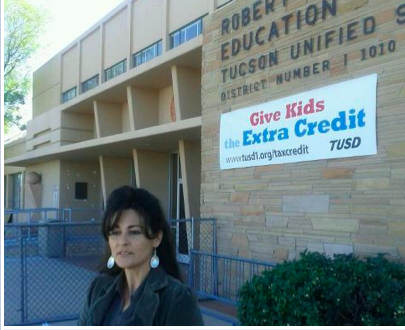 However, in the throes of a new desegregation order law suit, and in defiance of a January TUSD school board resolution "to increase its coverage of Mexican American history and culture, including a balanced presentation of diverse viewpoints on controversial issues," TUSD superintendent John Pedicone and TUSD school board member Michael Hicks have drawn local outrage for stepped up punitive measures against Mexican American Studies advocates, including Hicks' wild comparison of University of Arizona Mexican American Studies faculty to the Penn State child abuse scandal on a local radio station.

More so, Pedicone, who has repeatedly referred to the Ethnic Studies/Mexican American Studies crisis as a "distraction," has also refused to answer public demands to display the confiscated books in libraries or even qualify why any of the removed Mexican American Studies textbooks were in violation of state laws. In truth, the violation-ridden Tucson school district under his leadership will apparently celebrate next week's centennial without any textbooks or special recognition of Mexican American history and heritage or the Mexican American founder of Tucson public schools, Estevan Ochoa. Virtually whitewashed out of history on the outdated TUSD website, which is riddled with historical errors, Ochoa heroically led the passage of the first state bill for public funding of schools through Arizona taxes, as the chair of the Committee on Public Education. He also famously paid for Tucson's first schools with his own funds. The Arizona Citizen noted in 1876: "The zeal and energy Mr. Ochoa has given to public education, should give him a high place on the roll of honor and endear him more closely than ever to his countrymen. He has done much to assist in preparing the youth for the battle of life."

In Tucson this week for a statewide lecture tour, internationally celebrated linguist Noam Chomsky referred to Tucson's removal of Mexican American Studies books and curriculum materials as an "international disgrace."

"What we see happening in Arizona poses a threat both to critical education," renowned education scholar Henry Giroux wrote this week, "and to the very nature of democracy itself." Giroux concluded with a stern warning:

The Arizona censorship of ethnic studies, the destruction of associated knowledges and the silencing of dissent is one of those events that flash before us in ways that might at first suggest nothing more than a silly, irrational or anomalous happening. But that is far from the actual case. Placed within a long view of history, it clearly signals the formation of those antidemocratic forces waiting in the shadows for an opportune moment to enshroud the entirety of the United States in what the philosopher Hannah Arendt once called, "dark times."

With all of the bad publicity, district spokespeople are going out of their way to say that these acts do not equal censorship and that they support free speech. If board members truly support free speech, however, the least they should do is immediately remove these books from the "district storage facility" and make them available in each school's library.

In fact, thousands of teachers across the country are now using books and texts from Tucson's Mexican American Studies curricula in a special "No History is Illegal" campaign. In effect, children from rural Georgia and Maine to urban centers in Oregon and California are learning what Tucson school children have been denied.

According to TUSD spokesperson Cara Rene, "Several school libraries have made requests to have copies or additional copies of the books formerly used in MAS classes for their collections. TUSD is responding on an individual basis to inquiries received about Mexican American Studies classes and the curriculum materials."

A quick review of the TUSD library catalog, however, shows that there are only a handful of copies of several of the seven removed textbooks. Rene did not respond to the fate of scores of other books and texts used in cancelled Mexican American Studies courses, nor has TUSD responded to public calls for the books to be displayed.

Prior to the delivery of her petitions, Gonzalez, who has taught various Mexican American Studies courses in elementary, middle school and high schools in Tucson, answered a few questions on the TUSD censorship, and the impact of the removals on teaching Mexican American history in Tucson schools.

Jeff Biggers: Virtually every major national educational, teacher, publishing, literary and librarian association has denounced the removal of MAS books from your classrooms. What sort of support are you receiving from around the country?

Norma Gonzalez: The signatures from around the country are evidence of the national concern for the district's irrational decision to remove books from schools that are heavily utilized by teachers and students. They are also evidence of the national support to fight against an attack on our public education system, specifically local control in that a community has the ability to determine what is effective for the academic success of the specific student population. Support has also surfaced in the form of teach-ins and read-ins whereby educators are teaching the banned curriculum and reading our banned books. This type of irrational decision made by TUSD board is recognized nationally for what it is: A discriminatory ban against books, curriculum and teachers in one department.

NG: The administrator at one of my sites handed me a list of the banned books and gave me the directive to box them up and hand them over to her to send to the book depository (book graveyard).

JB: Can you point out some of the books or texts that were removed from your own classroom, and how you included them in your various MAS curricula?

Pedagogy of the Oppressed was utilized as a resource in implementing our pedagogy and introducing our students to the idea of problem posing education vs banking education. Moreover, to introduce our students to the levels of consciousness and have our students monitor their thought processes and try and think and respond from a critical consciousness angle in a manner that promotes positive social change. Both 500 years, Chicano, and Jimenez's Mexican American Heritage were utilized as texts for classroom instruction, and as resources for students inquiry projects on historical events.

JB: Only days away from Arizona's centennial, what aspects of Arizona's history are not being covered due to the removal of the MAS textbooks?

NG: There will be an obvious omission of Chicano History without the use of our texts as the districts texts are deficient in this area. The greatest irony and indeed a travesty of justice is the district's history books make no mention of how our public schools were founded and financially supported by a great Tucsonensen, Esteban Ochoa (more irony: I am currently at Esteban Ochoa Elementary school full-time the rest of this year). Today, Esteban Ochoa's district that he founded and financially supported, has banned the history and instruction of his contribution to Arizona, indeed the United States.