ISTANBUL -- Turkish President Recep Tayyip Erdogan is taking advantage of the refugee crisis in Europe to obtain the European Union's support for his own authoritarian regime. The 2.5 million refugees in Turkey are the ultimate trump card for Erdogan. He's the one calling the shots.

A meeting in October between Erdogan and the presidents of the European Council and the European Commission resulted in a shady deal by which the release of an EU progress report for Turkey -- which contained serious criticisms of Erdogan's party -- would be delayed for Erdogan's sake. The European Commission president, Jean-Claude Juncker, even seemed willing to overlook Turkey's diminishing freedom of the press and human rights. Even so, Erdogan acted insulted by the EU's offer of 3 billion euros in financial aid, noting that Greece, during its own crisis, had received 400 billion euros in aid. He then threatened to "open the doors to Greece and Bulgaria" and "put the refugees on buses" into Europe.

All of this may explain why Angela Merkel, the leader of the most powerful country in the EU, has met five times with Turkey's leaders in recent months. On Monday, Turkish Prime Minister Ahmet Davutoglu, negotiating once more with EU leaders in Brussels about the refugees, succeeded in doubling the EU's offer from 3 billion to 6 billion euros. In addition, the EU may lift visa requirements for Turkish citizens traveling to Europe's Schengen zone. In return, Turkey will allow NATO access to its territorial waters to stem the flow of refugees and will also readmit some of the refugees who have traveled to Europe.

Europe is unwise to trust Erdogan, given his long history of political opportunism.

The U.N. High Commissioner for Refugees has expressly stated that the deal struck between Turkey and the EU -- which would send refugees in Europe back to Turkey -- runs counter to international law and the European Convention on Human Rights. Nonetheless, the German minister of the interior, Thomas de Maizière, has defended his government's current policy vis-à-vis Turkey, declaring, "We cannot be the world's arbiter regarding human rights." For the moment, it seems, both Brussels and Ankara are satisfied with the deal. But both sides are aware that Erdogan can always wrest new concessions from the EU by threatening to flood Europe with refugees.

With this deal, the EU also turns a blind eye to Erdogan's increasingly authoritarian rule. Under the current Justice and Development Party, or AKP, government, anyone deemed an enemy of the state -- including journalists, politicians, businessmen and academics -- is fair game for prosecution.

Recently, Cumhuriyet, one of the country's most venerable newspapers, reported on the AKP's shipments of arms to jihadis in Syria. Erdogan then denounced the paper's editor-in-chief, Can Dundar, and its Ankara bureau chief, Erdem Gul, declaring that those responsible for the story would "pay a heavy price" for it. On Erdogan's orders, Dündar and Gül were arrested and charged with espionage, then held in custody for 92 days until the constitutional court ruled their detention unlawful. Upon their release, the Turkish president expressed his contempt for the rule of law, stating that he was "unwilling to abide by or respect the court's decision."

The AKP government has likewise targeted academics critical of its policies. Since July, clashes in the Southeast between Turkey's security forces and the Kurdistan Workers' Party, or PKK, have become more and more deadly. Well over 100 civilians have lost their lives, while thousands are eking out a precarious existence amidst weeks-long curfews.

Both sides are aware that Erdogan can always wrest new concessions from the EU by threatening to flood Europe with refugees.

In January, a total of 1,128 Turkish and foreign academics signed a petition calling attention to this humanitarian crisis. Erdogan castigated the academics as "traitors," giving the go-ahead for a judicial inquiry. Those under investigation face potential penalties ranging from six months to two years in prison. At the same time, a motion has been submitted to Parliament to lift immunity for five deputies from the Kurdish People's Democratic Party, the HDP, on the grounds of "being members of a terrorist organization."

The AKP's crackdown on journalists reached a new milestone last week, when the government took over one of Turkey's best-selling newspapers, Zaman, which is known to have ties to the Gülen movement, a Turkish religious and cultural organization. The government also arrested the owners of the Boydak Group, one of Turkey's largest furniture manufacturers, which is likewise affiliated with the Gülenists. The charges were the same in both cases: setting up a terrorist organization in order to overthrow the Turkish state.

As in Stalin's Russia, almost everyone in Turkey whom Erdogan labels a "traitor" is soon tried and put behind bars. However, in eliminating threats to his own rule, Erdogan has been opportunistic rather than capricious. When Erdogan and the AKP came to power in 2002, the biggest obstacles they faced were Turkey's pro-secular judiciary and its military, which had carried out four coups since 1960. Abroad, with his promises of "advanced democracy," Erdogan enjoyed the support of the EU and the U.S.

As in Stalin's Russia, almost everyone in Turkey whom Erdogan labels a 'traitor' is soon tried and put behind bars.

At home, Erdogan had the backing of the Gülen movement, which had long ensconced itself in Turkey's police force and judiciary. He had little trouble clipping the military's wings through show-trials of hundreds of officers, including dozens of generals. Gülenist assistance also made it easier for Erdogan to replace secular-minded judges in all high-level judicial bodies. Years later, when some Gülenists alleged corruption in Erdogan's government, he instantly reversed course and branded his closest ally a "terrorist organization."

Erdogan has taken a similar approach to the PKK, with which Turkey has been at war for more than 30 years. During a ceasefire that lasted from 2013 to 2015, Erdogan held peace talks with imprisoned PKK leader Abdullah Öcalan; he also turned a blind eye to the PKK's stockpiling of weapons in Turkish cities and refused to let a trigger-happy army carry out anti-PKK operations. When the talks fell through in July 2015, however, Erdogan was transformed overnight from peacemaker to warmonger. From that point forward, anyone who campaigned for peace was considered a "terrorist" in Erdogan's eyes.

Erdogan's political maneuvering has followed a consistent pattern over his 14 years in power: form temporary alliances of convenience, negotiate with opponents when it suits him to do so, then turn on old partners once their purpose has been served. Evidence of Erdogan's mercurial nature can be seen as far back as the 1990s, when he famously declared democracy to be "a means, not an end;" a decade later, he was preaching about "advanced democracy" in order to quash opposition in the military and judiciary. Europe is unwise to trust Erdogan, given his long history of political opportunism.

With this refugee crisis, we are witnessing the decline of another European 'empire,' brought about by its own moral bankruptcy.

At the same time, the EU's own foreign policy record over the past five years has been shameful. Following the Arab Uprisings, it helped overthrow the Muammar Gaddafi regime by bombing Libya, only to leave the country in ruins. In Syria, it allowed Turkey and the Gulf countries to arm the opposition, escalating civil demonstrations into a civil war. Now the EU is making under-the-table deals with Turkey in an attempt to solve the very refugee crisis it helped create.

In caving to blackmail from unscrupulous partners and in refusing to take consistent, moral stances, the EU is betraying its founding principles of democracy and individual liberty. A millennium and a half ago, the Western Roman Empire collapsed due to waves of nomadic incursions. Today, with this refugee crisis, we are witnessing the decline of another European "empire," brought about by its own moral bankruptcy. 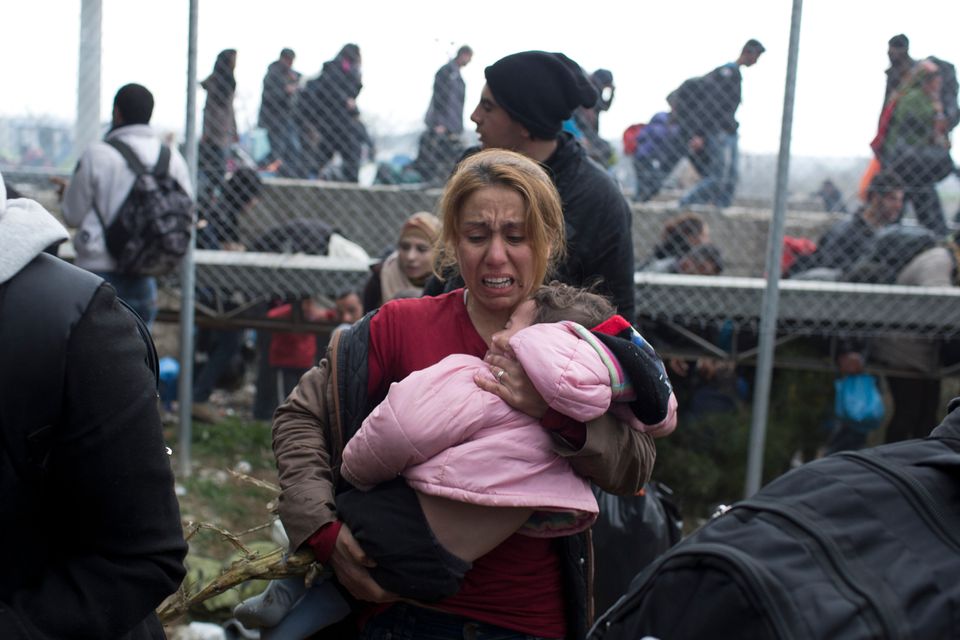 1 / 12
A woman carries a child on the Greek side of the border as they run away after Macedonian police fired tear gas at a group of the refugees and migrants who tried to push their way into Macedonia, breaking down a border gate near the northern Greek village of Idomeni. (AP Photo/Petros Giannakouris)
ASSOCIATED PRESS