In this presidential campaign season marked by candidates who describe corporations as persons, and immigrants as threats to America's national security and cultural identity, a short animated video titled Globalization: preventing the sameness of the world paints a very different picture. The threat, according to the Ukrainian-born Eugene Hütz -- leader of the gypsy, punk, cabaret band Gogol Bordello -- is a globalized economic system that spawns soulless, edgeless, byproducts "where you can buy all these stupid souvenirs and shirts that you can't tell where they're from."

The antidote to the monoculture of "mall music" and endless McDonalds, according to Hütz, can be found in the "kontra-cultural layers" of New York City and around the world, "where the best mutations are happening," where musicians and artists who come from various traditions, reject their traditions, "acquire a distance from it, inhale all this new stuff, and from those two you go into this third position, making an entity of its own."

Unlike those presidential candidates who pledge to return the country back to its "classical values" or preservationists who long for the purity of a good old days that never existed, Hütz, speaks of "mutating the culture" as the only way to keep it alive. "Through mutating it and making it new -- you keep the tradition."

The words of the hyperkinetic poet/musician/philosopher, are captured by documentary artists Warren Lehrer and Judith Sloan as part of their multimedia project, Crossing the BLVD: strangers, neighbors, aliens in a new America, which features stories, sounds, and images of new immigrants and refugees. The four-minute, 15-second animated video is the latest manifestation of the award-winning project which also includes a book (W.W. Norton), an audio CD, performance, and traveling exhibition that has already been to 14 museums and galleries around the country.

One of the recent exhibition venues had a room devoted to screening videos, "so I decided to animate the Globalization piece from the audio CD," said Lehrer who made the video along with Brandon Campbell, a former student of his from SUNY Purchase, who currently works as an animator at Comedy Central. "Of course we didn't finish the video on time for it to be in that show, but now we're releasing it on the Internets -- the largest gallery in the world," Lehrer quipped.

The thought-provoking and electrifying new video launches today at EarSay.

The soundtrack to the video, arranged and produced by Sloan, combines recordings she made of Eugene Hütz expounding, Yuri Lemeshev (also of Gogol Bordello) improvising on his accordion, and the sounds of people on the streets of Queens, N.Y., the most ethnically diverse locality in the United States.

"It's the last cut on the Crossing the BLVD CD, and the last words of our book and performance, because the vision Eugene paints of how to keep the culture alive, is the great hope of our project." The last "movement" of the five-movement Crossing the BLVD project, called "Unlikely Bedfellows," features people from all parts of the globe who come together in Queens and New York City because of something they share in common like playing ping pong (the second most popular sport in the world), joining a political club for "New Americans," going to an International High School in the basement of a community college, or forming a band made up of musicians from Ukraine, Kazakhstan, Israel, Sakhalin Island, and Queens. Hütz came to the United States with his family as atomic refugees after the Chernobyl nuclear disaster. Once in New York he connected with other diasporic musicians interested in expressing their experiences, "debauchery, and humor" through music that is at once very new and not so new.

The "video manifesto," as Lehrer calls it, begins with the black and white keys of an accordion transforming into a bar code as we hear the voice of Eugene Hütz saying, "Globalization... is a ridiculous marketing heads concept that helps sell things that people don't necessarily understand. It's basically killing the culture." The bar code forces the word "Culture" (woven in a beautiful multicolored fabric) off the screen. The word GLOBALIZATION then appears, encircling a ginormous gyrating dollar sign.

Warren Lehrer is a writer, designer, and typographer, acclaimed for capturing the shape of thought and reuniting the traditions of storytelling with the printed page. His recent animation work is an extension of his lifelong pursuit. He sees the Globalization video as part of a long line of manifestos that employ expressive typography as means of conveying a radical perspective. "And like most manifestos, it begins with a critique of the status quo, and then offers an alternative vision, that hopefully, stimulates a conversation."

Lehrer and Sloan are founders of EarSay, an artist-driven non-profit arts organization dedicated to uncovering and portraying stories of the uncelebrated. Their projects "bridge the divide between documentary and expressive forms in books, exhibitions, on stage, in sound and electronic media." Judith Sloan is an actor, writer, radio producer, and oral historian whose works have been performed and aired around the world. Her award-winning radio documentaries and audio essays merge reportage with music and sound art.

As part of EarSay she runs an educational initiative called Transforming Trauma Into Art, providing theatre, music, and hip hop education to teenagers from war-zones and immigrant youth who have been displaced by natural disasters and poverty. She performs her new play Yo Miss! Teaching Inside the Cultural Divide at Joe's Pub in NYC with a live band on Feb. 16. Part documentary, part music, part poetic autobiography, Sloan's play like Lehrer's recently completed illuminated novel containing 101 books within it, defies categorization. In the spirit of Eugene Hütz' words, their work like Gogol Bordello's mutates the tradition and keeps it alive.

PHOTO GALLERY
Eugene Hutz of Gogol Bordello featured in animation on Globalization by EarSay
Download
Calling all HuffPost superfans!
Sign up for membership to become a founding member and help shape HuffPost's next chapter
Join HuffPost 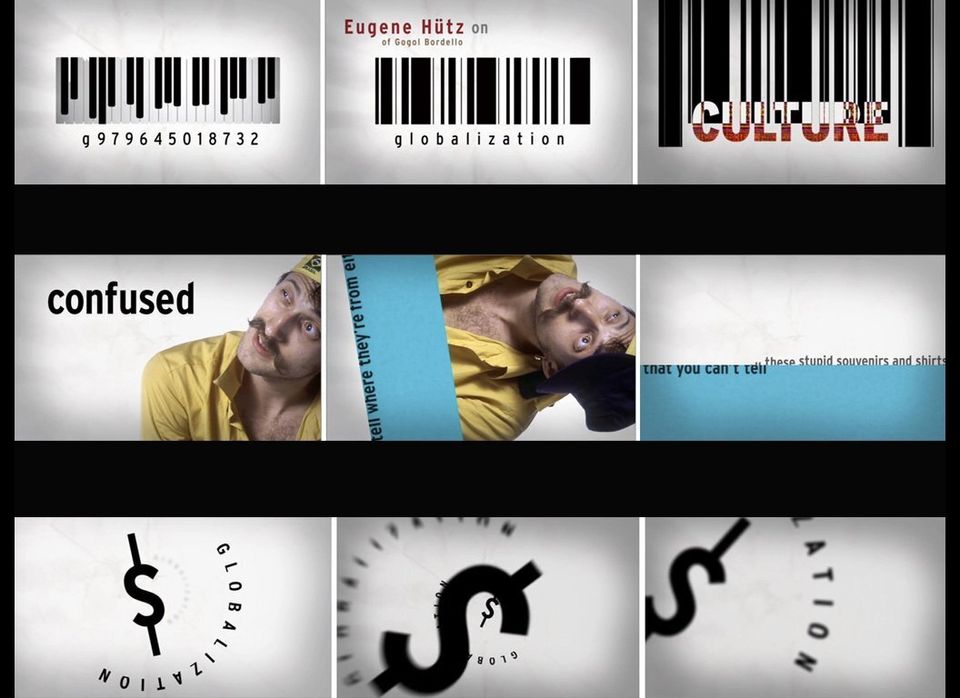