For now almost thirty years, Michael Werner has continuously shown the work of French painter Eugène Leroy. In a new exhibition in New York, the gallery delights us with an outstanding selection of the artist's luminous nudes, one of his favorite subjects. Most were executed in the late eighties and nineties, an important time for the artist: Michael Werner began representing him in 1983 and he met Marina Bourdoncle in 1986, the artist with whom he shared his life until his death, in 2000.

In the uptown gallery, Leroy's nudes, at times buried, and at times revealed by thick strokes of oil paint, are perspiring light and humanity. Viewing them requires time and attention though, in order to appreciate their subtle qualities. 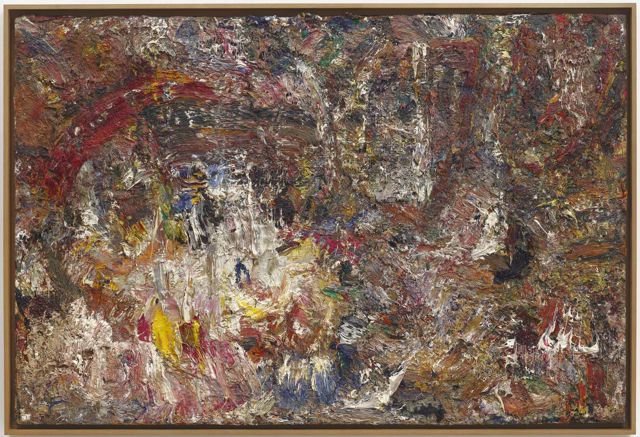 
In his studio near Lille, in the north of France, Leroy painted day-in and day-out, from hour to hour, never using electric light in his studio. Everyday he would end his painting session bathed in the sunset of a very particular northern light.
His subjects were simple and classical, a nude, a landscape, a self-portrait - working most frequently with live models as a model.

Leroy said the subject was essential to his painting, and for him 'a painting' was what took place between himself and his model. The presence of this model was a necessity for him. He would say: "I can hardly live without the presence of a model". Thus, underpinning his work is the model, naked or dressed, who poses, without being static. While posing, Marina, who appears in most of the works exhibited at Michael Werner used to read Ulysses by Joyce, Rimbaud, Proust, or played the guitar and flute. To help him at this task, he had a skeleton dangling from the ceiling of his studio or Tellem statues, so even in the absence of a model, he could still refer to the human form.

Rembrandt was a major reference for the artist throughout his life. For him, Rembrandt had a certain way of remaining faithful to nature, and to man in his depictions. In all his statements, he said that what Rembrandt was looking for in his work was 'the presence of the other, human fraternity', and that is what Leroy was also searching for in his work. 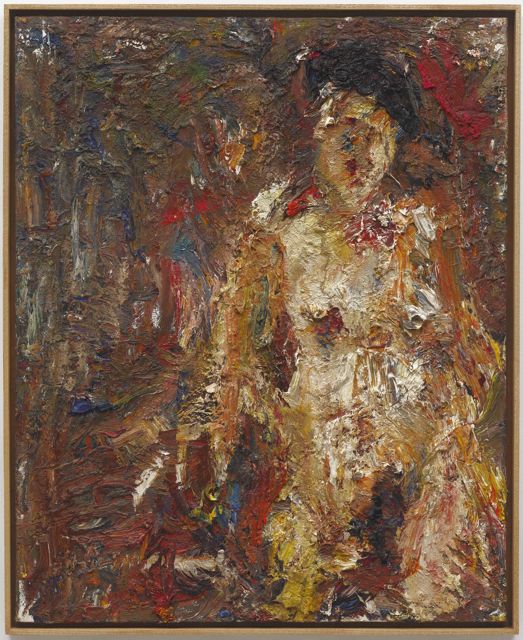 From the late 1980s onwards, to achieve this, Leroy used brush loads, directly from the tube, and palette knife strokes. He often scratched the paint in order to apply a different layer or color. The paintings are very well constructed and the oil paint is used for its light intensity rather than for its thickness. Ironically, Leroy always said he wanted to put as little material as possible on the canvas. Often, we find ourselves in front of a sort of low-relief polychrome sculpture where the paint is sometimes more than an inch thick.

When speaking about the thickness of the paint, the artist said 'the painting should gain depth until it reaches the eye'. Paint, the actual material, is thus used for its light intensity, not simply for its thickness. The material brings something to the drawing and also provides the structure of the painting and its light. The drawing and the material both structure works that would otherwise seem to exist on the edge of abstraction. 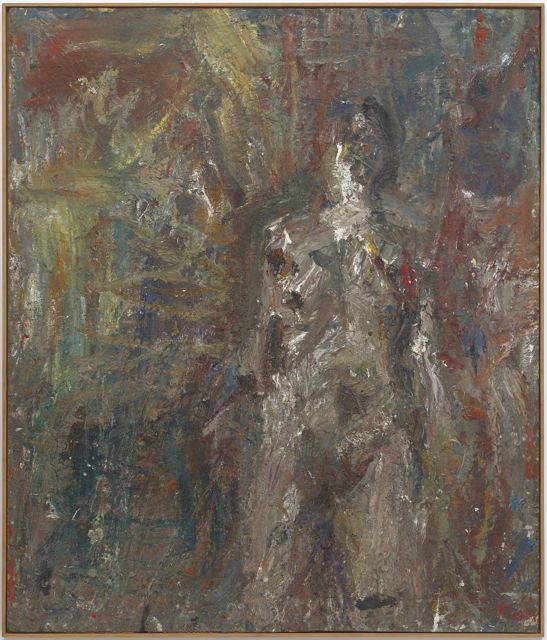 Light was a very important quest for the artist, and in 1974, he saw an icon at the Tretiakov Gallery in Moscow which made him realize that in icons--light enlightens the subject, and light emerges from behind the subject as well. This is the effect he sought to achieve all his life: to create the effect of light illuminating the subject from behind and from the front. He really wanted to make a painting that had its own light - we have to keep in mind of course, that light is both an effect and a state of color. Light is what makes his paintings pulsate at their very heart, it also organizes the painting from within. The painter was obsessed with light: the light of the paint and the light of the other.

Color in his paintings is subordinate to the light and to the expression of form and space. He organized each color in relation to the other colors. It could take him thirty minutes to add a new color and it could take him over a year to finish one painting. In some cases, it took 10 to 20 years, like Portrait nu féminin, 1970-1999 presented in the gallery.

In the older paintings like Nu Vert, vibrant colors are underneath and there is a certain quietness in this painting, which is not the case in his more recent works.

In his later works, bright tones emerge like in Marina nue, colors are airy and floating and the tube of paint is squeezed onto the canvas. He used the tube of paint as an affirmative gesture, as a drawing tool. As it can be seen in the exhibition, the freedom of the strokes are impressive. When using a knife and a brush, the brush always carries the tones that were previously applied.

The color, the material, and the drawing are closely interlinked. Paint in Leroy's works is an evolving substance, a metaphor for flesh. The material is like a thick skin, vibrant, breathing and there's even an olfactory dimension, the smell of his constantly drying paintings.

Initially, the figure is buried and then it is gradually revealed in the space created by the material. The nude always occupies the center of the picture where they are typically standing, which is usual for sculpture, but less common in painting. The figure is embedded in the background where they exist on the edge of non-existence. 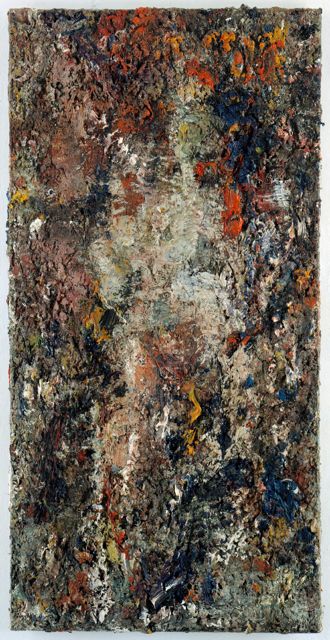 
The raison d'être of his works is the depiction of human beings, the depiction of their visual and imaginative existence. Leroy said 'he wanted to paint a nude that transcended the limits of the canvas'. For him, a successful painting of a nude is a nude you want to touch; when observing one of his paintings, we go through a physical and visual experience.

The painter relied on others in order to come closer to himself, closer to his painting.
His relationship with the other is one of sensuality, vision and thoughts, it is the crystallization of all these elements that makes his painting interesting. 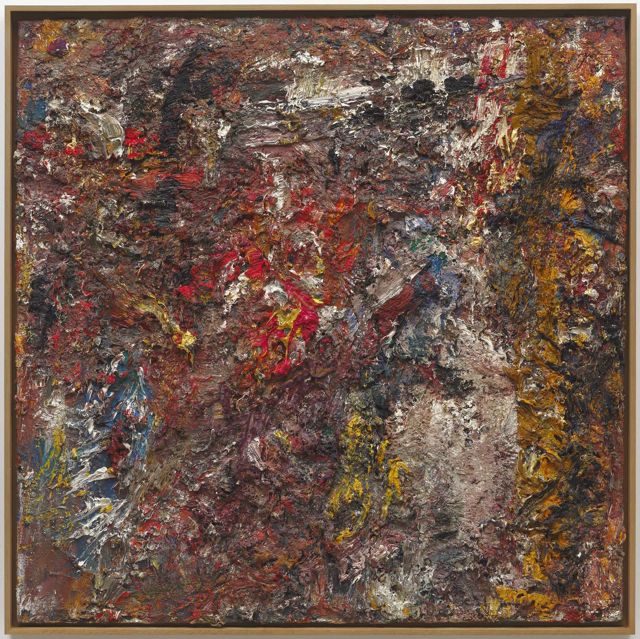 Leroy said he painted in order to find the original emotion, that is, what occurred between him and his model, a strong sensation that was rebuilt and structured. A strong sensation that came from chaos, from pain, and moved towards the bearable. The painting is a kind of a theatre of his relationship with the other.

In that sense, these paintings are reminiscent of Georges Bataille's texts which reveal our insatiable desire to merge with the other, our perishable individuality and the fullness of horror and joy.

Leroy said he wanted to bury the painting's narrative, almost to shatter it, in order to see through it and beyond it. By tearing apart resemblances, the artist produces some harrowing resemblances, creating paintings that are shy and savage at the same time.