Since the early 1970s, Catalan artist Eulàlia Grau has been a formidable force in the avante-garde tradition of collage. Using manipulated photographs plucked from popular newspapers and magazines, the critical feminist rips apart the norms of male-dominated societies, pointing her finger at the layers of economic and political power she views as unjust.

Mixing elements of Hannah Hoch's Dada craft with Kurt Schwitters's flair for vibrant color, Grau's collages are the subject of a new exhibit at the Museu d'Art Contemporani De Barcelona (MACBA) titled "I Have Never Painted Golden Angels." The exhibit spans Grau's decades-long career, which began during the tyrannical reign of Francisco Franco. "When I started, we were dominated by Franco," Grau stated in an interview with El Punta Vui. "Now there are the politicians and bankers, who from their castles are extorting us all. We live in a time similar to the feudal. It's terrible." 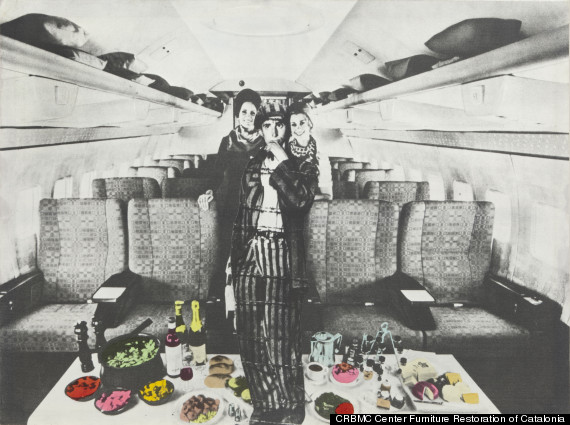 Grau's photographic works are packed with innuendo, from a bride walking down an aisle lined with dirty dishes to a montage of restrictive female fashion accessories. Her forté is juxtaposition, situating symbols of poverty, crime and injustice beside icons of popular culture. For instance, one image shows President Carter with his wife and daughter next to the dim portrait of working class family. Another fixates on the prying eye of the press, featuring a shot of the camera-ready media placed deliberately above a horrific picture of bodies in caskets.

Overall, the retrospective at MACBA traces the transformation and stagnation of the political atmosphere in which Grau worked. While the transition from tyranny to democracy slowed in Spain, the female artist continued to draw focus to the lack of political progress with her striking, unforgiving art. Scroll down for a preview of the exhibit below and let us know what you think of her style in the comments.

Eulàlia Grau's "'I Have Never Painted Golden Angels" will be on view until May 26, 2013 at MACBA.