Bill Marsh presents an interesting picture of interconnectedness in Sunday morning's New York Times. It's a great visual of the myriad connections through borrowing and lending across borders, but a few nuances to consider:

- Some folks who follow these numbers will be surprised to see US debt to GDP list as 100%. This is gross debt, including about 30% of GDP that the government owes to itself (more on that below).

The relevant metric for this picture should not be gross debt. It should be debt held by the pubic -- that's the number that markets care most about because that is a measure of our government's debt obligations to external creditors. According to CBO, debt held by the public as a share of GDP is expected to be 71% in 2012.

If you want to learn more about this important distinction, see this from the CBPP. As that analysis points out:

Such a focus on gross debt is seriously misguided and could inhibit the effort to address the nation's long-term fiscal challenges.

Debt held by the public consists of promises to repay individuals and institutions -- in the United States and abroad -- who have loaned the federal government money to finance deficits. Gross debt includes, in addition to the debt held by the public, so-called intragovernmental debt --money that one part of the federal government owes another part. More precisely, intragovernmental debt consists of promises to repay certain federal government accounts, such as the Social Security Trust Funds, for amounts they lent to the Treasury in years when their earmarked revenues exceeded their outgo for benefits and other costs.

Here's how CBO sees it:

Long-term projections of federal debt held by the public, measured relative to the size of the economy, provide useful yardsticks for assessing the sustainability of fiscal policies." In contrast, "gross debt . . . is not useful for assessing how the Treasury's operations affect the economy.

- The article states that American banks are heavily exposed to some of the countries with serious sovereign debt problems, including Spain, Ireland, and Italy. Not according to the figure below from Moody's. Which doesn't mean we're out of the European debt woods at all, however. Many US investors and funds are exposed, and we export a lot to the Eurozone. So contagion is a real worry, no question. But I don't think it comes mostly through our banks' exposure to the shaky debt. 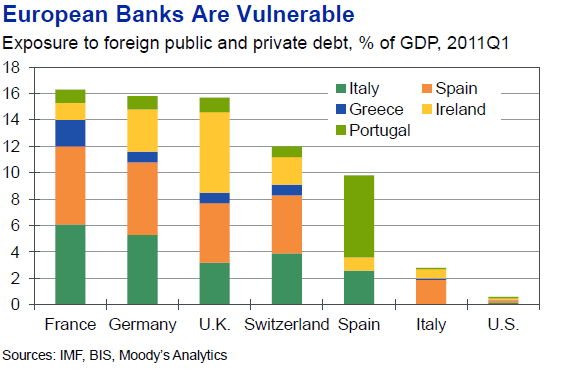 - The most important question about all this in the near term is what happens next. From where I sit, European negotiators are slowly and haltingly moving the in right direction, but the process is really quite disconcerting. You hear about progress toward the only solution that I think will work -- rip the band-aid off Greece, creditors take big haircuts, a robust fund to backstop exposed institutions -- only to read the next day that it's hit a wall.

- The second more important question is a medium-term one: what measures must be taken to avoid being back here again soon. From where I'm still sitting, that's a question about debt, and I mean at every level: households, corps, banks, governments. I'm convinced there's a global misunderstanding of the concept -- as Minsky discovered decades ago: "stability is unstable." With booms, come destabilizing debt bubbles that have us stuck in the economic equivalent of the shampoo cycle: bubble, bust, repeat.

More on this in a forthcoming piece I wrote for the journal Democracy.