Book that European vacation now, America: It hasn't been this cheap in 11 years.

The euro was in a crashy mood on Friday, briefly falling to its lowest level against the U.S. dollar since November 2003, according to Bloomberg. One euro is now about $1.15, down from about $1.40 less than a year ago.

Here is a chart, courtesy of FXStreet.com, singing the sad song of the euro today. It measures the number of dollars a euro will buy. The lower the line, the weaker the euro:

As you can see, Europe's common currency has battled back a bit, but it's still in a deep pit. Here's a longer-term chart, courtesy of Bloomberg.com, for perspective: 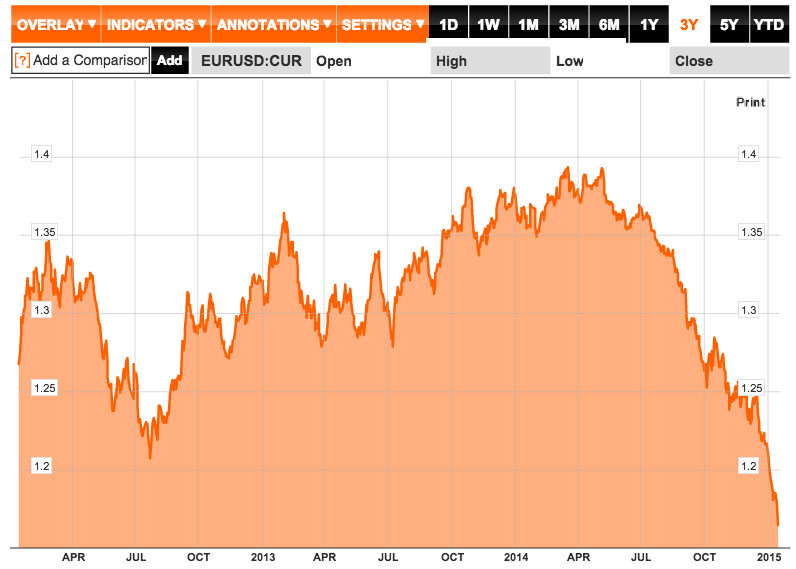 What ails the euro? At least three things:

Thing One: Europe's economy is in a depression, basically, that is going on its eighth year.

Thing Two: The European Central Bank is getting ready to buy a bunch of bonds to help the economy. This is basically "quantitative easing," the same thing the Federal Reserve did in the U.S., only about seven years too late. The ECB's bond-buying will flood the market with euros, which will make them cheaper.

Third Thing: The Swiss National Bank on Thursday threw a boulder to the drowning euro by giving up on trying to keep its own currency, the franc, artificially cheap by buying euros. Investors have been buying francs and dumping euros because Switzerland is a safer economy, basically. The Swiss hate that because it makes Swiss vacations even more expensive than they already were. But the SNB finally just said, "Eh, whatevs," and let its currency soar, crushing the euro.

Oh, well, who needs Alps when you can see Paris/Berlin/Venice/Barcelona on the cheap this summer? Assuming, that is, that Europe's problems don't spread overseas and cost us all our jobs.