The protests in Ukraine, which started in November 2013 when President Viktor Yanukovych pulled out of signing a trade deal with the European Union in favor of a later deal with Russia, erupted over the weekend in violence. This uncharacteristic turn, in a country known for peaceful protests like the Orange Revolution of 2004, has finally garnered much needed attention from the Western media.

If you're following the unfolding crisis and confused about certain terminology, here is a quick and dirty glossary to Ukraine's EuroMaidan. 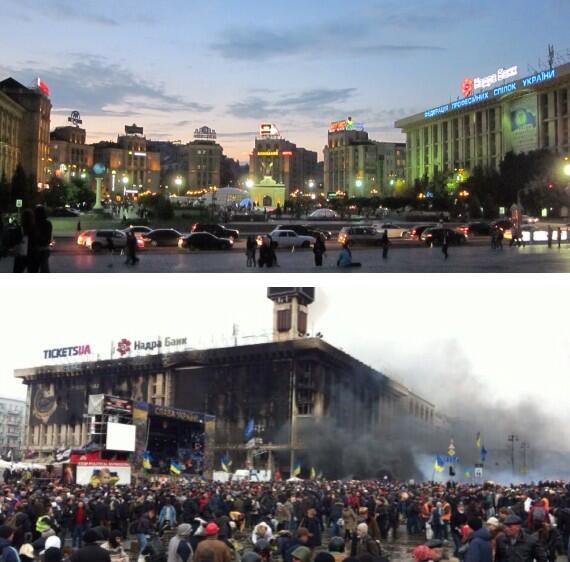 Orange Revolution: A peaceful protest when thousands of Ukrainians gathered to demonstrate against the results of 2004 Ukrainian Presidential Election. Wearing orange (the color of Victor Yushchenko's Our Ukraine Party) the protesters stayed in the streets for 17 days, braving November's freezing temperatures and snow, but staying in a controlled and peaceful mood.

Titushki (тітушки): A term applied to "thugs" who, according to protesters, are sponsored by the government to create chaos and violence. They have been blamed for many of the recent shootings.

Berkut (Беркут): a special Ukrainian police force unit that has been deployed for crowd-control and acts as a sort of riot-police. They are fiercely loyal to Ukrainian authorities and have waged increasingly brutal measures against protesters.

Party of Regions (Партії Регіонів): Current ruling party which endorsed Viktor Yanukovych for President in 2010 and has major strongholds in Eastern and Southern Ukraine. Recently was in the news when newly appointed Kyiv City Administrator Volodymyr Makeenko resigned from the party.

"Batkivshchyna" or Fatherland Party (Батьківщина): Opposition party which is currently the second largest party (behind Party of Regions). They seek the resignation of the current government and a revamp of the constitution.

"Svoboda" or Freedom party (Свобода): Far-right, ultra nationalistic party. Also known as the All-Ukrainian Union. This party has a controversial nature as its roots have been linked to a loose alliance with Nazi Germany.

Ukrainian Democratic Alliance for Reform (UDAR, Удар) Party: Another opposition party with the support of the popular Vitali Klitschko, which aims for the reorientation of Ukraine towards Europe.

Unlike the days of Orange Revolution, the protests occurring now can be followed online in real time using the hashtag #євромайдан. Live video can also be streamed here.