New research that suggests Jupiter's moon Europa has a body of water the size of the Great Lakes just two miles below its icy surface has brought scientists one step closer to determining whether or not the freezing satellite is suitable for the development of extraterrestrial life.

According to NASA, scientists have long thought that a huge ocean -- more voluminous than all of earth's oceans combined -- existed below Europa's surface. But since the moon is so far from the sun, the surface ice is thought to be tens of miles thick.

Now, scientists analyzing data from NASA's Galileo spacecraft have found ice blocks on Europa's surface that suggest an interaction between the moon's icy shell and a lake-like body of water under the surface, Discovery reports.

According to Britney Schmidt, the lead author of the study that appears in the journal Nature, this could mean nutrients and energy are moving between the ocean and icy shell.

"One opinion in the scientific community has been if the ice shell is thick, that's bad for biology. That might mean the surface isn't communicating with the underlying ocean," Schmidt said in a statement. "Now, we see evidence that it's a thick ice shell that can mix vigorously and new evidence for giant shallow lakes. That could make Europa and its ocean more habitable."

To come to this conclusion, Schmidt and her team analyzed "chaos terrains," areas of dark, bumpy, irregular features on the surface of Europa. According to TIME and the paper's abstract, the team created models based on the formation of similar terrain on Earth -- subglacial volcanos and ice shelves -- to determine how the chaos terrain on Europa could have formed.

The researchers determined that it was heat rising from the moon's deep subterranean ocean and melting ice near the surface, creating briny lakes inside the moon's thick ice shell, that may have caused the collapse of these roughly circular structures above them.

While scientists are confident about their findings, NASA says the only way to confirm them is if a spacecraft were to explore the shell.

According to Wired, this won't happen anytime in the near future -- the Europa Jupiter System Mission (EJSM), proposed spacecrafts that would orbit Jupiter and Europa, would cost an estimated $4.6 billion. 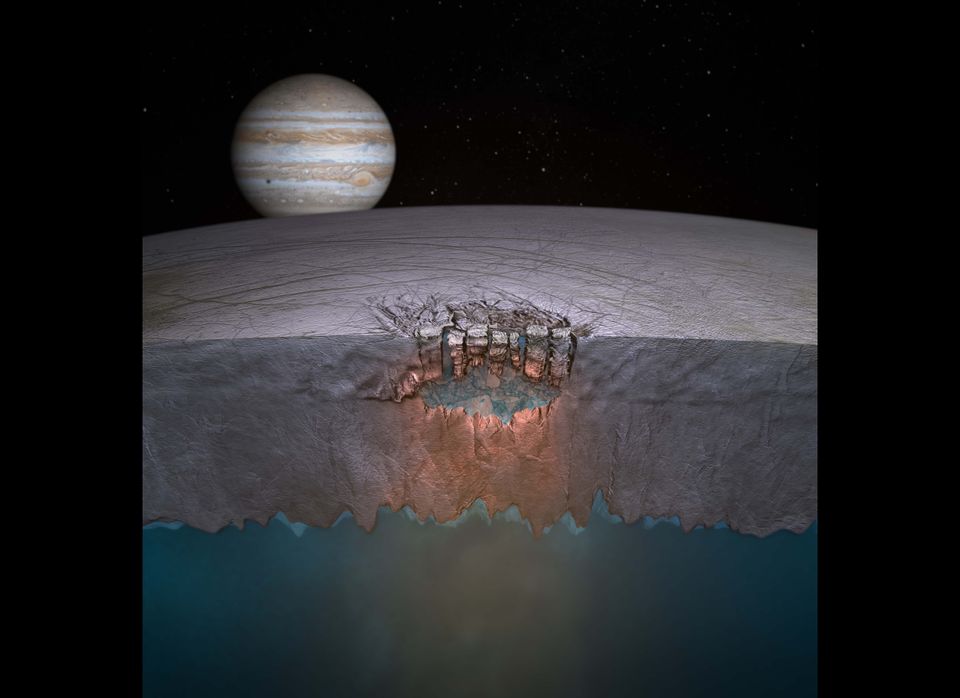