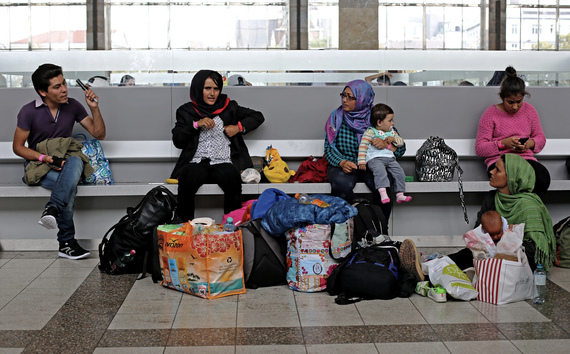 Terrorism, violence against women, unemployment - these are true threats that we are currently facing in Europe, yet far too often these issues are being equated with the refugee crisis that is visibly pressuring European countries. That equation is not only false, it is also a threat to our societies.

Recently, I was asked what we should do about the refugee crisis in our country (Sweden), because "refugee men and boys are coming here with a culture of violence and rape women." I was shocked that someone so close to me could have such a perspective. Although I got angry, I realize that I can't blame him entirely, because media is constantly painting that picture.

So, for those who may be influenced by that horrible image. Let me break it down for you in a few brief points:

Refugees are fleeing for their lives. Don't for a second believe that people choose to leave their homes, risk their lives on dangerous journeys and come to places where they have no security and don't speak the language, if they had another option. Refugees are fleeing disaster, terror, violence, persecution, discrimination and poverty that makes life not worth living.

Gender based violence is a global epidemic. The World Health Organization estimates that 1 in 3 women have been subject to violence in their lifetime - and yes, those statistics are true for Europe too. At this point, I believe we are our own worst enemy if we don't dare to see what is in our own backyard and inside our own homes. Every week, 50 women are killed in Europe by the hands of an intimate partner or ex-partner.

Europe needs immigration. Many European countries are not going to survive their declining population, and in the long run, immigration is more than necessary for Europe to sustain societies and grow economies.

I am not turning a blind eye to the events in Cologne, Germany and similar events in Stockholm, Sweden - violence against women is always wrong - but we have a responsibility to fight gender based violence strategically. This involves strengthening gender equality and educating men and boys, as well as recognizing the differences in social norms and the status of women in the societies where migrants are from. Yet, it is a gender issue, not one of regulating the influx of refugees.

Despite my first point above, that refugees are fleeing for their lives, and despite international treaties that give them the right to seek refuge in new countries, Europe makes it close to impossible to do so. Instead of following human rights treaties and international laws, European politicians are closing borders and fostering intolerance, xenophobia and racism. To make things worse, some European countries are seizing refugees' assets or implementing costs on "health tourism".

This human rights issue is bigger than borders, and this opportunity too great to not take advantage of. We need to welcome women and girls, men and boys who reach our borders with hope for a better future. Alexander Betts says in his insightful TED Talk, "They're human beings with skills, talents, aspirations, with the ability to make contributions -- if we let them." Together with them we can create a future that is better for all of us.

We need to share positive stories and we need media to reflect the true story of the individuals behind the refugee crisis. We need to spread hope - hope for safety and hope for peace. Let us be open to those who are seeking refuge instead of becoming fearful of them.