From Greece and France to Sweden and Denmark, Europe's far-right parties have taken the spotlight in recent months. Trading on sometimes vitriolic anti-euro, anti-immigrant sentiment, as well as renewed security fears, parties of the far-right have taken the center stage in protests and elections.

These parties have not emerged overnight. In fact, many have lingered on the fringe of Europe's political landscape for decades. The WorldPost presents a guide to some of the most prominent radical right parties active in Europe today. 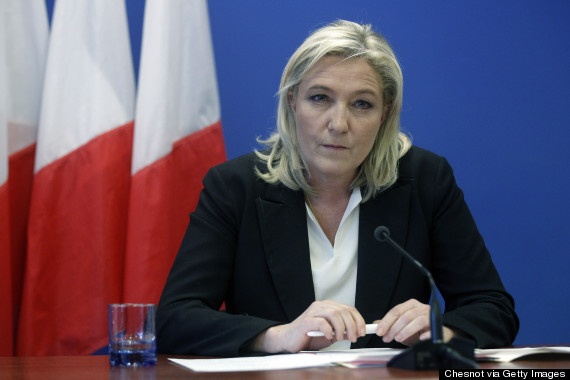 Marine Le Pen delivers a speech during a press conference on Jan. 16, 2015. (Photo by Chesnot/Getty Images)

History: Founded in 1972 by Jean-Marie Le Pen, the current leader's father, the National Front has had a longstanding role representing the far-right of French politics. Since the mid-1980s, FN has received anywhere between 10 to 16 percent of the vote in French presidential elections, with a notable success in the 2002 election, in which the elder Le Pen forced a second-round runoff with incumbent Jacques Chirac. Le Pen was ultimately defeated by a 65-point margin.

The party and its founder have been involved in numerous scandals and have faced strong criticism. In 1998, Jean-Marie Le Pen was found guilty of assaulting a member of the Socialist Party and barred from office for two years. Accusations of anti-Semitism and racism have also plagued the party, with Le Pen convicted of inciting racial hatred against Muslims in 2005. These incidents garnered Le Pen the nickname 'The Devil' in the French press.

A marked shift occurred in 2011, when Marine Le Pen took over leadership. Ostensibly presenting a kinder face of the party, the younger Le Pen has attempted to rebrand the FN as populist conservatives. Under her leadership, the party has become ascendant in French politics, winning its first senate seats in September of last year.

Platform: The National Front holds a platform that is strongly anti-immigration and anti-European Union. Their manifesto calls for enhancing border security and a reducing of legal immigrants from 200,000 a year to just 10,000.

The FN also seeks to prioritize the rights of French citizens by implementing protectionist legislation that would make certain benefits, such as child support, exclusive to French families. The party has also resurrected the idea of the death penalty, and called for an increase in prison size. 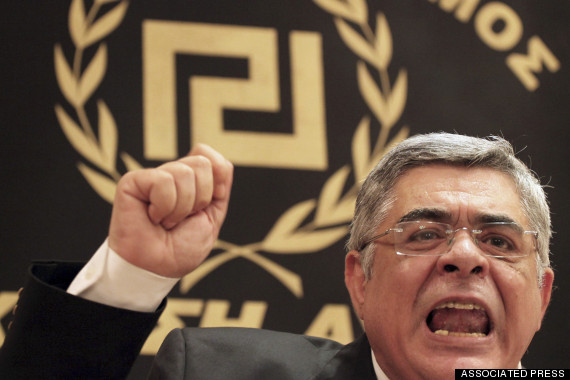 History: Founded in 1980 by Nikos Michaloliakos, who still leads the party today, Golden Dawn remained on the fringe of Greek politics until 2012. Amid protests over austerity and widespread anti-EU sentiment in the wake of Greece's bailout, the party gained an unprecedented 18 seats in parliament during the election that year, making it the country's third most popular party and raising fears over the rise of extremism in the country.

Widely described as a neo-Nazi party, Golden Dawn has been linked to hundreds of violent attacks against minorities and has organized rallies in which supporters gave Hitler salutes while singing fascist songs. In 2013, Golden Dawn suffered a setback after its leader and 16 other members were arrested in the wake of the murder of an anti-fascist rapper by a Golden Dawn supporter. Mihaloliakos currently remains in jail as his trial continues.

Platform: Extremely anti-immigration, Golden Dawn promotes a racist-nationalist worldview but tends to lack many specific policy positions. The party garners support through a vague populist platform that includes such programs as "the eradication of household debt for low-income workers," according to The New Republic. The party also holds an anti-gay stance, with members having distributed threatening homophobic pamphlets outside of gay nightclubs.

Popularity: Even though its leader and multiple lawmakers are in jail, Golden Dawn managed to come in third place in Greece's national election, held in January 2015. The party captured 6.3 percent of the vote, resulting in 17 senate seats in the 300-seat government body. 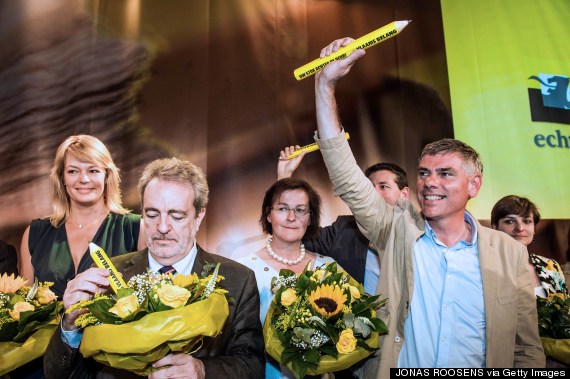 History: The predecessor of the Flemish Interest party, the Flemish Block, made its political debut at the end of the ‘70s, striving for Flemish independence from Belgium. In the decades that followed, the party adopted an anti-immigrant stance as well. After the Flemish Blocks’ historic victory in the 1989 elections, Flanders’ other political parties established a “cordon sanitaire,” an agreement never to form a coalition government with the far-right party on both the Flemish and national level.

Flemish Block changed its name to Flemish Interest in 2004 after Belgium’s Court of Cassation convicted it of racism. The party dropped some of its more extreme positions in the wake of its name change.

Platform: Since its 2004 change, Flemish Interest moved from a platform focused on the secession of Flanders from Belgium, opposition to multiculturalism and strict limits on immigration (including proposals to forcefully repatriate immigrants) to one that still strives for Flemish independence and the defense of traditional Flemish values, but tolerates immigrants if they assimilate to Flemish culture. The party still calls for amnesty for Nazi collaborators, and although it altered its stance on immigration, it maintains radical views. Filip Dewinter, one of the party’s key figures, proposed in 2012 to pay a 250 euros ($310) bounty to anyone who reports a veiled woman to police. 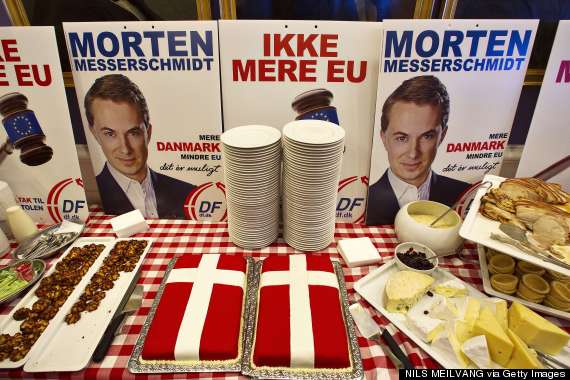 A poster featuring Danish People's Party's leading candidate for the European elections, Morten Messerschmidt, and reading 'No more EU' is displayed at the Danish Parliament in Copenhagen on May 25, 2014. (Photo NILS MEILVANG/AFP/Getty Images)

History: Founded in 1995, the Danish People's Party (DPP) has become a prominent feature of Denmark's political landscape. As early as the 1998 Danish parliamentary elections, the DPP claimed 13 seats in Denmark's 179-seat Folketing. Trading on nationalist sentiment and anti-immigration rhetoric, the DPP continued gains throughout the past decade, routinely coming in third place and averaging seats in the mid-twenties in each of Denmark's parliamentary elections. As the BBC notes, the DPP gained increased power and significance in the early 2000s as it became necessary for other parties to rely on its votes to reach a parliamentary majority.

Platform: The DPP promotes itself as a strongly nativist, Christian party and believes that "Danish independence and freedom are the primary objectives of Danish foreign policy." As such, the DPP is anti-European Union and promotes a Danish exit from the union.

A hallmark of the DPP's platform is their harsh anti-immigration stance, which proposes renewed border controls and attempts to restrict benefits to immigrants. As Time reports, in the decade between their emergence as a political power in 2001 and 2011, Denmark passed a number of strict immigration laws that saw the amount of asylum seekers and relatives of immigrants applying to enter the country drop by almost 70 percent. The DPP pressured for these laws to be passed and counted on its role as swing vote to demand immigration reforms.

Critics of the party point at the staunch rhetoric of some its members as evidence of racism and extremism. Party leader Pia Kjaersgaard has said she founded the DPP because there were "too many immigrants." In reference to Sweden's more open asylum policy, she reportedly said, "If they want to turn Stockholm, Gothenburg or Malmoe into a Scandinavian Beirut, with clan wars, honor killings and gang rapes, let them do it." She has also pushed for legislation that would block Arab satellite channels broadcasting in Denmark.

Popularity: Support for the DPP has risen ever since it emerged onto the political scene, but 2014 saw a noted boom in popularity. The DPP took the largest share of votes in the elections for European Parliament, doubling its seats from two to four, and capturing 27 percent of the Danish vote. As of Dec. 30, Reuters reports that the DPP currently heads the polls for Denmark's election in September. 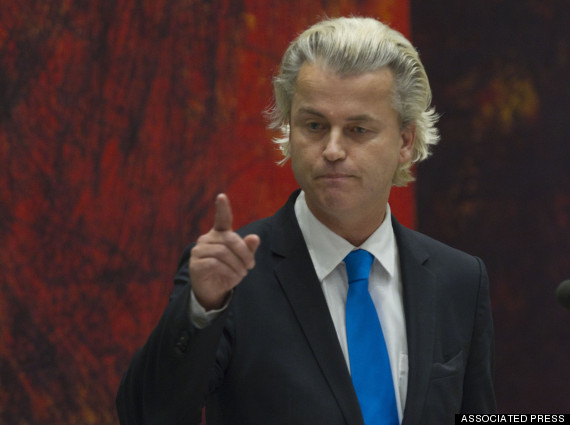 History: Geert Wilders broke with his People's Party For Freedom And Democracy (VVD) in 2004, angered by the party’s support for Turkish membership of the European Union. Wilders started his own faction, the Friends of Geert Wilders, which later became the Party for Freedom (PVV).

Wilders mostly gained notoriety with his fierce and vocal anti-Islam stance. Wilders considers Islam to be a totalitarian ideology. He has been advocating for a ban of the Quran since 2007, and wants immigration from Muslim countries halted and Muslim immigrants to leave the country. He believes Muslim criminals should be deported and construction of new mosques should be banned.

Platform: Wilder's PVV party is anti-European Union, anti-euro, anti-Islam and anti-multiculturalist. The party wants the Netherlands to leave the European Union so The Hague can independently decide on its immigration and fiscal policies. It argues for low taxes and the preservation of the welfare state. The party has a populist economic program, but is socially conservative -- advocating the protection of Dutch tradition.

Popularity: The PVV came in as the third largest party in the 2012 elections. 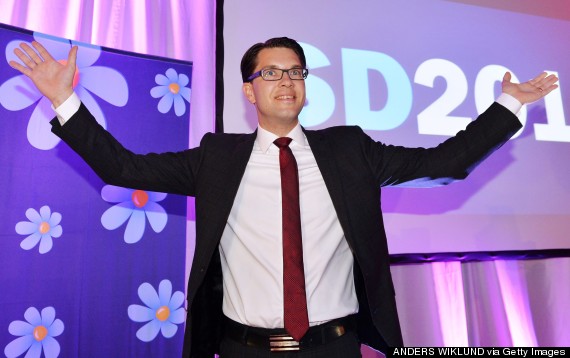 History: Founded in 1988, the Sweden Democrats were originally a white supremacist group with reported links to Aryan militants. In the years since, the party has attempted to soften its image and present itself as a populist, anti-immigration party that supports traditional Swedish culture.

After maintaining a fringe presence for much of its existence, gaining only 2 percent of the vote in the 2006 elections and around 5 percent in the 2010 vote, this past year has seen an unexpected boom for the party's popularity. The Sweden Democrats took third place in the national elections this past September with just under 13 percent of the vote, and won enough seats to block legislation.

The conflict threatened to make Sweden ungovernable and set up another snap election, but in December of last year the country's two leading parties struck a controversial deal to stay in power. While the move preserved Sweden's current government, it also set up the Sweden Democrats as the main opposition party, which could strengthen their appeal in the future.

Platform: As may be expected from a party with roots in racist nationalism, the Sweden Democrats hold views that seek to preserve traditional conceptions of Swedish culture, while firmly opposing immigration. The SD says it aims to cut immigration to the country by 90 percent. The party also speaks openly about its staunch anti-Islamist views, with its 35-year-old leader, Jimmie Akesson, saying in a speech that "Islamism is the Nazism and communism of our time." Sweden's Prime Minister Stefan Lofven went as far as to call the party "neo-fascist," which set off a heated debate over the nature of the party.

Perhaps the most distilled representation of their beliefs came in the run-up to the 2010 elections, when Sweden Democrats aired an ad featuring a old woman walking towards pension money, only to be overtaken by a group of women in burqas who storm past her.

Popularity: Currently a prominent fixture in Sweden's government after the 2014 election, the rise of anti-asylum sentiment and concern over immigration has given the Sweden Democrats fertile soil to grow.

An academic study by Sweden's Linkoping University into SD voters found that xenophobia was the primary root of the party's support, and that SD voters "hold drastically more negative views towards Muslims and persons with a foreign name than voters of other Swedish parties."

Eline Gordts contributed to this report.