Today there is so much being said about Muslim immigration in Europe. Yet it is all too often in the abstract -- we don't usually meet those who are involved or hear their stories.

Last year, over 3,000 died trying to reach Europe, and the over 170,000 who managed to make it to Italy looked forward to what is often an extended period of misery as they encountered confused and sometimes contradictory European policy towards them. In the last week alone, Italy rescued around 4,000 migrants from the sea.

The immigrants who arrive enter the category of "illegal" and live in the shadows of Europe. To understand their plight and the challenges they are creating for European countries, I wanted to speak to the people involved, both the immigrants themselves and representatives of European governments who are dealing with them. With the current humanitarian emergency, notably in the Mediterranean where so many continue to die, it is crucial to hear their stories. Perhaps then we can gain some insight into what needs to be done to alleviate this monumental crisis.

It is for this reason that I launched the Journey into Europe project to study the Muslim communities of Europe, which has taken myself and a research team across the length and breadth of Europe, from France and Germany to Greece and Bosnia. In Catania, Sicily, in the last wintery days of 2014, I made the acquaintance of a 16-year-old boy from Gambia. It is important for all of us to hear what he has to say. 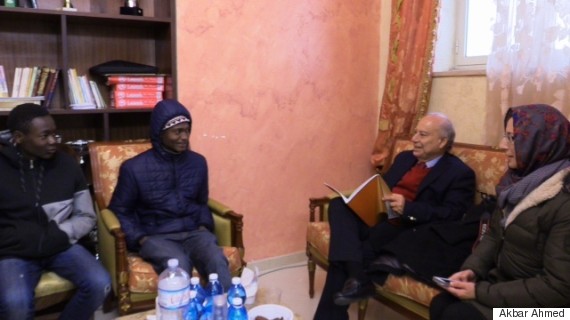 I met Ahmedu for the first time during a tour of the main mosque in Catania. The imam, a cheerful and welcoming Arab, was showing us around the building. Ahmedu, like many other desperate immigrants before him, was helping to clean the mosque as a token of gratitude for the hospitality. Something about him struck me. He had an air about him, the way he carried himself. His long journey from home had not demolished his poise and confidence. I went up and talked to him. He seemed distant and defensive. When I asked him his name, he gave it mechanically, as if answering an official. I then said with a smile that my name is also Ahmed. We were connected, I said. There was a faint smile on his face.

Beneath his poise, I sensed that here was an extraordinary person with an extraordinary story to tell. I was determined to interview him for my project but he left shortly afterwards and when we arrived the next day, it was not certain if he would be there at all. Just as we were about to leave, he turned up. He was reluctant to talk. Illegals know that talking to strangers can land them in trouble. We began our long interview with a tense Ahmedu holding the stage.

Ahmedu said he was the eldest son, the pride of his parents, and had four siblings. When his mother and father separated, his life changed. He was determined to make his fortune in order to reunite his parents and help his siblings.

"I want something to make my family happy," he said.

His father bade him well, and he set out on a hellish journey without documents or money that took him through the vast expanse of Africa through Senegal, Mali, Burkina Faso, Niger and Libya. His journey took one year and two months. Ahmedu recounted the horrors he encountered on the way, of the times he was jailed by corrupt policemen, of the pain he felt in his body due to the hunger in his stomach. There were many times when all he could feed himself with was water. When he could, he found employment as a helper to a barber, hawking water, or serving food, which gave him enough money to get to the next destination. Sometimes he could save something to send to his father -- always with a request to include his mother. He would also try to ring when he could so that he would have news of his family. He struggled merely to survive, never quite sure when he would be able to continue his journey towards his ultimate destination of Europe. He repeated two words as he talked, "not easy", "not easy."

"On one occasion, an Italian policeman head-butted him for no apparent reason. Perhaps he wished to express his dislike for immigrants, perhaps for dark-skinned people, or Muslims."

Ahmedu recounted the climax to this nightmare journey when he was crammed with about 100 people into a small open boat on the shores of Libya, nearly drowning in the commotion following the outbreak of gunfire in the port. The passengers were heading for Europe with no money and no papers. What they had was nothing more than the dreams that travelers carry with them. Water was scarce and the food tasted of petrol. Ahmedu felt sick. Very soon the boat developed leaks. The passengers were asked to use their plastic water bottles to bail out the water before the boat sank. Cold, hungry, confused and uncertain, Ahmedu was rescued by the Italian coastal authorities and found himself in Sicily.

On their arrival, Ahmedu and the other migrants were herded into a school hall. They were given clothes and after a few days allowed to leave. But if Ahmedu thought his problems in Europe were over, he was mistaken. They were just beginning. He began to sleep on the streets of Catania. It was cold, and he had no warm clothes. He foraged for food in rubbish heaps and drank as much water as he could to stave off his hunger.

On one occasion, an Italian policeman head-butted him for no apparent reason. Perhaps he wished to express his dislike for immigrants, perhaps for dark-skinned people, or Muslims. Shocked, Ahmedu collapsed in a heap of tears. When recounting the incident, his eyes filled up with water. The indignity and humiliation were too much to bear. He could do "nothing," he said.

He may have frozen to death on the streets if a kindly Sicilian had not informed him about the central mosque that could provide shelter. Without an official document or a single dollar in his pocket, Ahmedu's only concern was that he had not spoken to his family and did not have the means to do so. It was playing on his mind and kept coming up in our conversation. When we gave him the means to ring home, he was visibly moved. When I asked him what kept him going, he mentioned his faith, but most of all the thought of doing something that would help his family and bring his parents back together again.

The thawing -- or re-humanizing -- of Ahmedu as we got to know each other was a wondrous testament to the power of the human spirit. It was almost as if someone far away began to come into focus, someone almost faded began to take on sharp features. As he went deeper and deeper into his story and as my research team began to show visible signs of emotion at what they were hearing, a slow transformation began to take place in Ahmedu. His voice became slightly stronger, his posture straighter and he began to show signs of a smile.

Ahmedu's story raised some fundamental human issues that concern all of us, including the very idea of survival. If you were a spirited healthy young African male, deeply conscious of your position as the eldest son of a family that was struggling with poverty, lived in a country where over half the population existed under the internationally recognized poverty line and were ruled by a president known for his cruelty and tyranny, you would probably be thinking like Ahmedu. You would leave to seek your fortune elsewhere with the idea of returning to help your family. If you were desperate enough, nothing would stop you, not even the thought of crossing the Sahara or the dangerous Mediterranean Sea without money or official documents.

Yet, to too many in the West a young man like Ahmedu represents an Islamic threat in which Muslims are hell-bent on re-conquering parts of Europe to impose an Islamic caliphate. As for the argument that immigrants simply mean more recruits for terrorists, not once in the two sets of interviews that we had did Ahmedu mention words like sharia or jihad. Yet, for the right-wing movements that are growing exponentially across Europe, this would not matter. They derive their lifeblood from the fear of immigrants and Islam.

In a practical sense, Europe is already facing a huge problem in the waves of immigrants arriving ceaselessly. It is going to get worse considering that the turmoil in Asia and Africa, which is the underlying cause of the migrations, continues unabated. A practical, humane and long-term policy must therefore be urgently introduced. The immigrants must be treated as human beings with humanity and respect. When they arrive, asylum proceedings should be initiated immediately so they can become citizens and begin contributing to their societies. If asylum is denied, they should be sent back to their countries with dignity.

The current situation, one in which there is no effective European policy, is not sustainable. Too many people are dying and the lives of so many others have become a living hell. Letting people die in the Mediterranean, locking them away in holding facilities, or letting them roam around Europe with few rights -- these are all immoral and ineffective policies.

"To too many in the West a young man like Ahmedu represents an Islamic threat in which Muslims are hell-bent on re-conquering parts of Europe to impose an Islamic caliphate."

Here's the paradox of Europe: the rich, comfortable and affluent nations of the north cease to look on immigrants as fellow human beings. Immigrants are forced into categories that deny them a legal status and effectively the right to even exist in their new countries. In contrast, Sicily seen in the north as backward and dominated by gangs, and despite the constant waves of immigrants, still retains a spirit of compassion and humanity.

In spite of high unemployment and economic stagnation, Sicily accommodates new visitors. When Sicilians can help them in small ways, they do. If they cannot do very much to alleviate their suffering, Sicilians don't add to the immigrants' burdens by deporting them or locking them away. They treat the them with dignity and respect. Even the local officials I spoke with hinted they were not entirely in agreement with the strict policies of the EU.

The mayor of Palermo, Leoluca Orlando, while fully aware of the economic crisis that faces his own society, still has a heart large enough to embrace everyone. Mayor Orlando rejects the very notion of calling an immigrant illegal and requiring a residency permit. 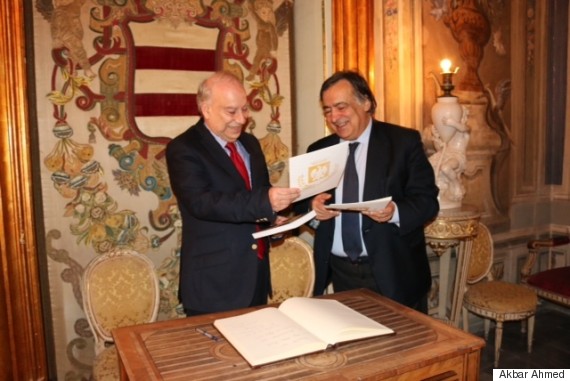 "I will never accept to imagine that a human being can be illegal," he told me in an interview.

The mayor asked: "Why does everybody try to land in Sicily?"

"Because," he said, answering his own question with a flash of Sicilian pride, "for Sicilians, no man is illegal."

I left thinking that perhaps the remote and powerful authorities that run immigration policy in the EU -- and the U.S. -- have something to learn from Sicily.

Akbar Ahmed is the Ibn Khaldun Chair of Islamic Studies at American University in Washington, D.C. and the author of the forthcoming study Journey into Europe: Islam, Immigration, and Empire.