Scientists drew this conclusion, detailed May 7 in the journal PLOS Biology, by calculating the length of regions of shared DNA from 2,000 Europeans.

The same technique hasn't been applied to other continents, but people in other parts of the world are just as likely to be closely related, the researchers said.

"In fact, it's likely that everyone in the world is related over just the past few thousand years," said study co-author Graham Coop, a geneticist at the University of California, Davis. [The 10 Things That Make Humans Unique] 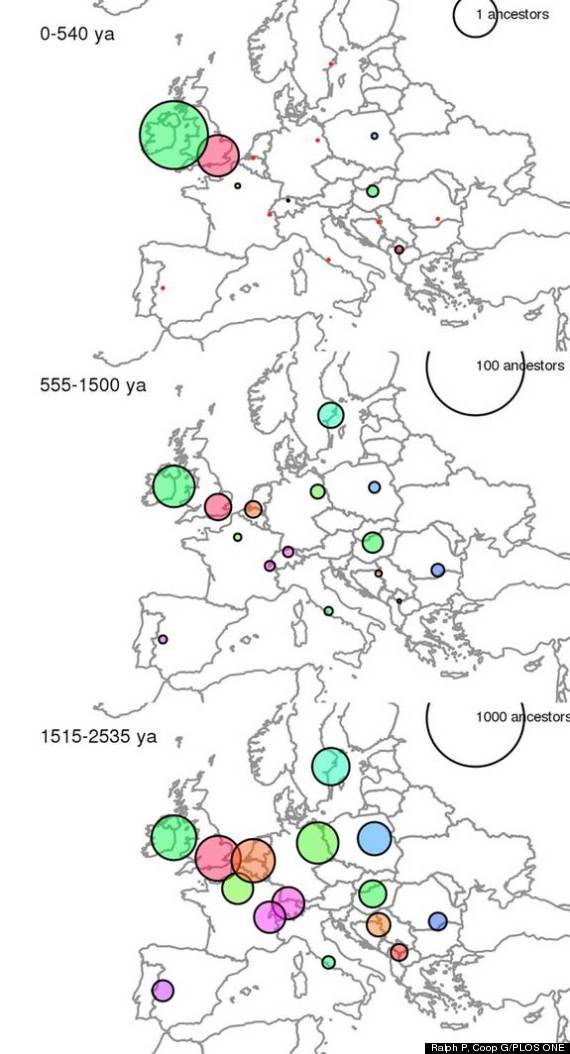 Maps that show where the distant cousins of modern-day people in the UK live, at three different levels of relatedness (recent on top, older on the bottom). Bigger circles mean more ancestors, and numbers give average number of shared genetic ancestors.

All in the family

For more than a decade, researchers calculated theoretically that all people shared common ancestors fairly recently.

To test that theory, Coop and his colleagues analyzed 500,000 spots on the genome of Europeans, from Turkey to the United Kingdom. To untangle European ancestry, they calculated the length of shared segments of DNA, or the molecules that contain the genetic instructions for life. When two people share a longer stretch of identical DNA, they are likely to share a more recent common ancestor, since over time those gene segments evolve and diversify.

The researchers found that all Europeans shared a common ancestor just 1,000 years ago.

There were also some regional surprises.

For instance, Italians are slightly less related to one another than people from other European countries are to one another, perhaps because Italians have had a large, fairly stable population for a few thousand years.

The researchers also showed that people in Eastern Europe were slightly more related to each other than were those in Western Europe.

That may be he signature of Slavic expansion and migrations, such as those of the Huns and the Goths, about 1,000 years ago, said John Novembre, a population geneticist at the University of Chicago, who was not involved in the study.

The new findings are exciting because they allow researchers to trace much more recent human history.