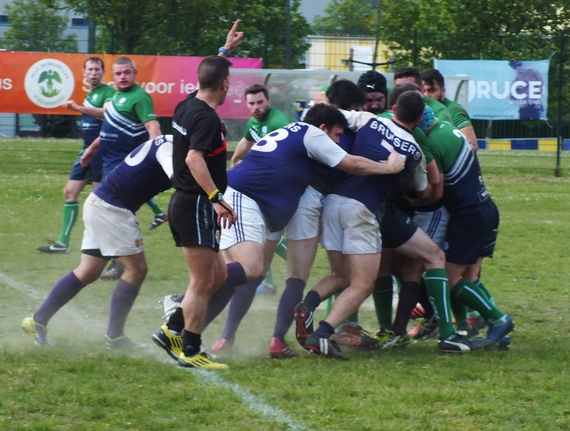 700 sportsmen took part in the Union Cup in Brussels. Winners are the Kings Cross Steelers from London - but its about much more than just winning!

"Make sure you write about the games we won!", says Nico, one of the players of the first german gay rugby team "The Berlin Bruisers". In fact they won against the Cologne Crushers - even made it to the semi-finals where they were outclassed by the sheer strength, fitness, and experience of the home team from Brussels, The Straffe Ketten (meaning "Tough Guys"). Both german teams are 'newbies' in the international gay rugby circle. Which is bigger than you might think: The International Gay Rugby Association lists more than 60 teams from all around the world, most of them in the United States, Europe and Australia. From Europe 24 of them sent more than 700 players to the Belgian Capitol last weekend where they played at the Union Cup, which is one of the big international gay rugby tournaments (The others include The Bingham Cup in Nashville next year, the Thebans Clinic in Edinburgh and "The Berlin Bash About" in Germany).

The Thursday before the tournament there were last minute trainings and running through strategies and 'set pieces' everyone was wound up like coiled springs waiting to be released. The exception was The Emerald Warriors from Dublin who arrived late in the day on Friday (taking their first blood from the hapless Bruisers !) - "They wanted to make their mark for the gay marriage referendum and they almost fell directly onto the field from the aircraft," said Nico: The referendum, which took place in Ireland probably was the only argument that could make the Irish team come late.

Friday and Saturday the tournament games took place, and on Saturday at close of play the winner was determined: The Kings Cross Steelers from London who rose to take the honours. That was no big surprise as the Steelers are a phenomenal force and one of the worlds best teams. With 20 years Club history it is also one of the oldest. In comparison, the Berlin Bruisers and Cologne Crushers are still spring chickens - the teams founded in 2012 and 2014, respectively .... And despite all this success and being members of a local straight league The Bruisers are still without a home pitch and having to 'make do' training on open parkland .... It's sometimes tough to get recognition.

But the Cup is not just about winning, says Arnaud Grisard of the Brussels team The Straffe Ketten, who mounted the tournament: "In addition to the sport the social aspects of gay and inclusive rugby are very important, too". Through their visibility as gay athletes the rugby players also want to promote acceptance of LGBT in all sports. And many of the teams actively campaign to fight against homophobia and stigmatisation. The Berlin Bruisers are in the process of developing a schools programme to illustrate that as a team we are far stronger than any individual could ever be. It is about standing up and being counted. In all this devotion and passion for justice, all gay teams have a broad church and happily accept straight players too. As Nico explained; "It's all about inclusiveness and breaking down traditional stereotypes." 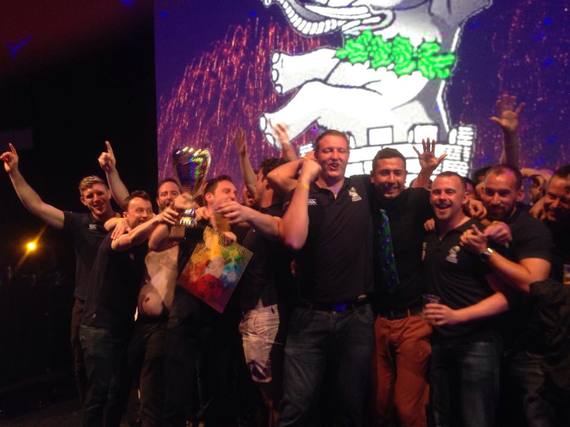 Nico is already an old hand, when it comes to international games: The Union Cup is his third international tournament. In addition to the sporting aspect the Cup means for him a happy reunion with friends and acquaintances from all over the world. "It is really nice to meet all the guys and after a hard day on the pitch to relax and spend the evenings together!" The parties mainly took place in the "Kolenmarkt", which is the traditional gay neighborhood in Brussels. Together with the local bars the Union Cup organizers created a "Union Cup Street", where the players, the Brussels locals and bewildered tourists celebrated drinking together till morning. The Bruisers spent some of the time dressed as Greek and Roman Gods, and the Manchester Spartans rather inexplicably all turned up the following day in wedding dresses !

Nico wonders what madness will take place in Madrid in 2017, the location for the next Union Cup ... "There is no knowing what will happen when you are out 'on tour' and as you might imagine there is the usual adage; 'What happens on tour, STAYS on tour'....."