BERLIN -- Great crises often produce enduring images. For the Israeli-Palestinian conflict, this has often been a terrified child cowering behind protective parents; for 9/11 it was brave firemen rushing headlong into collapsing buildings. Last month saw what could become one of the lasting images of Europe's unending crisis: the sight of burning cars and buildings after riots outside the European Central Bank.

While such carnage seems -- and indeed is -- pointless, it makes sense at another level. While protesters in other countries stage rallies and speeches outside of their national parliaments, Europe's central bank is increasingly its main seat of power. It was the bank, not Europe's political institutions, that seemed to snuff out the existential threat to the eurozone with a mere sentence by its president in July 2012 -- we will do whatever it takes to save the euro.

It was again the bank that offered hope to a stagnating eurozone economy in March this year by embarking on an extensive bond-buying program. In the face of national complacency and disagreement, this is the institution that is increasingly making Europe's political and economic weather.

There is thus some irony in the fact that this body is also the most unaccountable of the EU's institutions. While a lack of accountability has often been a complaint leveled at the EU, particularly from the recalcitrant U.K., the EU's decision-making structure has been significantly democratized in the last decade. By contrast, the ECB is both unelected and highly independent. Its autonomy from political censure is greater even than analogous institutions in other countries. Unlike the U.S. Federal Reserve, Europe's Parliament plays little role in selecting bank members; its deliberations and documents meanwhile are not publicly available.

"The ECB is both unelected and highly independent. Its autonomy from political censure is greater even than analogous institutions in other countries."

While such secrecy and autonomy were well suited to an era when the bank merely set interest rates or printed notes, the current bank has greater political responsibilities. As part of the infamous "Troika" monitoring the debt of southern EU states, it played a significant role in the recent standoff between Germany and the newly elected Greek government over whether to re-negotiate Greece's onerous "bailout" program. Its bond-buying program meanwhile -- likely to significantly alter the debt burdens of struggling southern states -- has significant distributive implications (and as such, has been heavily resisted by the German government). The bank has economic power, but also increasing political influence.

Faced with this conflict -- an institutional structure that accumulates power but whose decisions are insulated from scrutiny -- it is not surprising that EU citizens have attempted to find alternative means of making their voices heard. It is to Europe's great detriment that this voice has often been channeled during the crisis against the EU itself, such as to anti-EU protest and extremist parties.

These parties promise a misguided but easy solution -- let's abolish the EU structure altogether. Relatedly, the voice of EU citizens is being channeled into empty gestures. Greece's recent demand to Germany for wartime reparations is a foremost example of such a proxy battle; a nationalist-tinged dispute taking the place of a real debate about the benefits and costs of tearing up Greece's trouble-ridden EU adjustment program. Demands that democracies channel into meaningful political action, or at least debate, are increasingly being translated into destructive populism.

While European leaders have often argued during the crisis that there is "no alternative" to the current design of the euro, such developments render mechanisms for citizens to contest the decisions of institutions like the ECB crucial. If this cannot be provided through national elections alone, as suggested by Greece's recent experience, EU leaders must explore the possibilities for democratic institutions at the EU level to properly determine and scrutinize eurozone decision-making. This should include providing the European Parliament with the powers both to co-approve EU measures in the economic field and to carry a greater say in the appointment and scrutiny of the ECB's president. Exploring some of these possibilities is one of the key tasks of the Governance Report 2015, launched this week by the Hertie School of Governance.

This may yet be a constructive message from the destructive wreckage of Frankfurt; deferring the quest for meaningful political accountability for the eurozone is increasingly eating away at the democratic foundations of the EU project. The task of democratizing the euro cannot wait.

Mark Dawson is the co-author of the Hertie School of Governance's 2015 Governance Report (Oxford University Press, published 14 April 2015), which focuses on lessons learned from the ongoing eurocrisis. 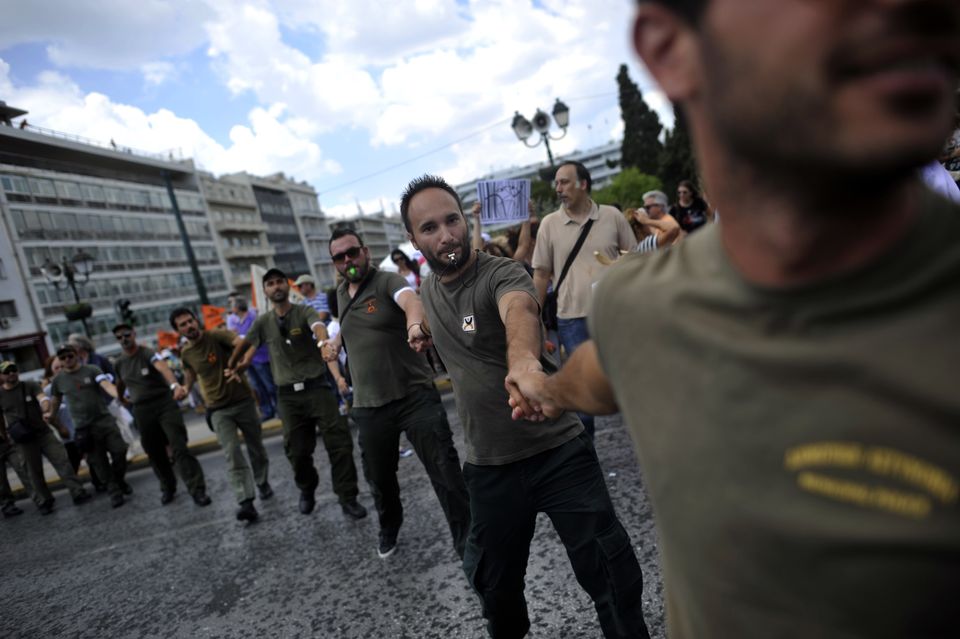 1 / 6
Municipal police members demonstrate on July 16, 2013 in front of the parliament during a general strike in Athens. (ARIS MESSINIS/AFP/Getty Images)
Getty Images