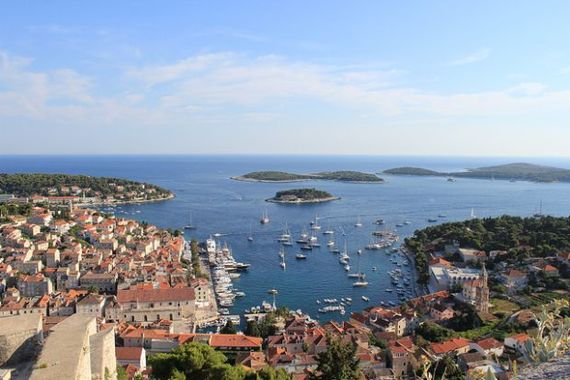 For most travelers, Europe may be more associated with medieval fortresses and train journeys than sand castles and ferry rides, but close inspection of the map reveals that the continent is home to thousands of miles of coastline and scores of islands off its shores. Some European islands are well-known homes of hedonistic frolicking while others are more the sandy-and-silent type, but all give you a sunny and salty slice of life you simply won't stumble across on the mainland. Just in time for summer, here are some of the best European island escapes.

See: 5 Places to Get Your European Fairytale Fix

Hvar
The Dalmatian Islands
This sliver of an island just off Croatia's mainland has seen its reputation rapidly rise in recent years as travel writers, celebrities and yachties have shared tales of it beauty. For good reason, too. As with the rest of the Dalmatian Islands of Croatia, Hvar is home to old towns full of faded white stone buildings bumping up against teal blue harbors full of bobbing boats. Add to the mix swaying fields of lavender and chic sunset bars built into the rocks, and you have yourself a glamorous stop in the Adriatic that manages to feel both off the beaten path and on the coastal catwalk. The island of Hvar is easily reached from the city of Split via ferry or catamaran, with ferries taking approximately two hours and quicker catamarans doing the journey in about half that time.

Texel
The Wadden Islands
Caramel-colored beaches, windswept dunes and messy mudflats made for stomping are the signature scenes on Texel, the jewel of the Dutch Wadden Islands. The Waddens are an archipelago of 50-plus islands that stretch from west to east across Dutch, German and Danish territory, but the very first one is Texel, making it a short 30-minute ferry ride from Den Helder, a town about 60 miles north of Amsterdam. Upon arriving in Texel, a few of your preconceptions of the Netherlands may come into question: Gaggles of grazing sheep, seven peaceful villages and one giant red lighthouse all vie for your attention and reside within a short cycle to the beach. Pack a sweater no matter what time of the year you go, though -- it's still Holland, after all.

Santorini
The Cyclades
Even if you've never actually traveled to the Greek island of Santorini, you're likely familiar with its blue-domed churches and white-washed villas. A favorite computer desktop background, motivational poster and film setting, Santorini and its chalk-white buildings crowned with blue domes are a feast for the eyes. The village of Oia is the place to go for the azure-topped beauties, while the rest of the island is home to sun-soaked villages all with their own rustic appeal. The cliffs the villages cling to and the colorful red, brown and black sand beaches below aren't just composed of any old rock: the crescent-shaped island is in fact an active volcano. Don't worry, though; there hasn't been a large eruption in more than 3,000 years.

Jersey
Channel Islands
Jersey, the largest of the Channel Islands that sit between England and France, is awash with idiosyncrasies that make for a unique European island experience. An English-speaking enclave with French street names, Jersey is well connected to both nations by a bevy of ferries and flights. And since it's not a full-fledged member of the United Kingdom, it embodies an independent streak that stems from its status as a British overseas territory. Weather-wise, Jersey is sheltered by the Gulf of Saint Malo, and as a result is home to considerably warmer and sunnier days than you would expect for this region of Europe. Charming harbors and beaches abound on Jersey, but for those who like to get active on holiday, the interior of Jersey is crisscrossed with biking and hiking paths, and even the crumbling ruins of a castle.

Ibiza
Balearic Islands
Known the world over as a hub of late-night revelry and 24-hour dance clubs, the Spanish island of Ibiza is worth raving about for a host of other reasons. The "hippy sister" of the Balearic Islands has a much more laid-back Bohemian vibe running through its sands than many people expect, and as a result it has a tendency to surprise travelers. Make no mistake, if partying and clubbing are what you're after, you won't leave a wallflower, but Ibiza is home to a surprising amount of serenity and history, too. Several areas of the island are protected from development thanks to their UNESCO World Heritage Site status, while Ibiza Town, and its fortified old town, dates back to the 7th century B.C. Plus, the island is home to many secluded coves and beachy enclaves just quiet enough to hear a pebble drop.

See: Best Islands in the World

About the author: Scott Hartbeck is most at home when he's away from it and as an American who now lives in Europe, is on a mission to see every corner of the Old Continent. His travel site, Worldwide Scott, is home to tales from Europe and beyond and is religiously read by his mother. If you just want the short version though, you can follow him on Twitter @WorldWideScott.