The coal industry has pointed to Europe's increasing coal use and imports as evidence of coal's inevitable future. Reporters have had a field day with this: The clean energy bastion is now home to rising coal use. The problem is reality doesn't match the rhetoric. The truth is coal's future in the EU is bleak. Here's what's happening.

First things first, new coal build in the EU is very similar to the U.S.: It's not happening. Of the 112 power plants proposed since 2008, only three have actually broken ground. Another 73 have been abandoned and as the international coal movement grows in strength the likelihood that the rest will go anywhere is exceedingly low. Every month projects are abandoned or shelved. Here's the fate of the wave of new coal plants planned in 2008 in the EU:

All told, since 2010 there has been a net closure of coal capacity in the EU of about 10GW. So what has the EU been building? Lots and lots of gas, wind and solar. 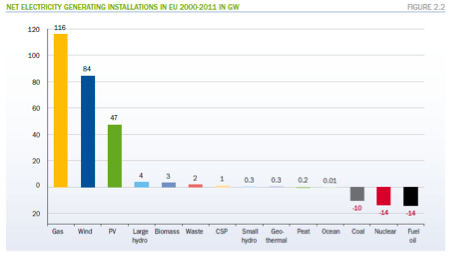 But wait you are a liar! I hear the Germans are building new coal to replace all that nuclear power. Nope. Twenty-four new coal plant proposals have been abandoned in Germany since 2008. A small number of announced projects remain but it is widely expected none of these will in the end be permitted and some remain just on paper. 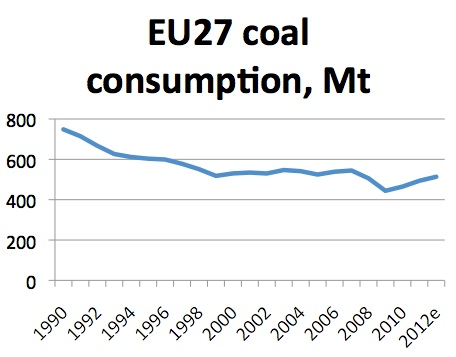 The increased coal burn that has occurred (and it has) comes from existing units. But this is due to short term economic factors, not a long term revival of coal's economics (which are terrible). In the EU, coal use has been growing since 2009 (after a steep drop in the preceding two years) but it is still below 2007 levels and well below increases in renewable energy generation. 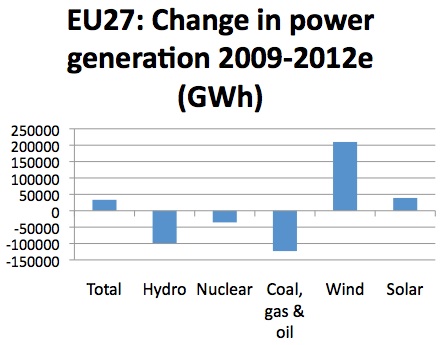 There's a lot of reasons for this short-term bump. The most important are: 1) strict new air pollution rules that ensure a huge amount of coal-fired capacity will be retired or constrained by 2016; 2) rock-bottom carbon prices; and 3) national level coal policies. But some of these same factors will conspire to have the exact opposite effect in the long run. 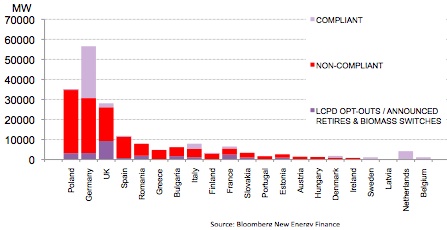 Let's look at the effect of the new air pollution rules first. These rules allow operators to use their coal plants at higher rates today because they will be forced to shut down tomorrow (thus the bump in coal use). The problem is this won't last forever. Ten percent of existing operators will close by 2015 because of existing air rules (20 GW). In 2016, new rules enter into force, and only 40 percent of coal-fired capacity will be able to comply. The rest will either close or undergo costly retrofits, with lots of operators expected to opt for closure. This means beyond the 20GW of capacity about to close there will be a further wave of coal capacity closure. 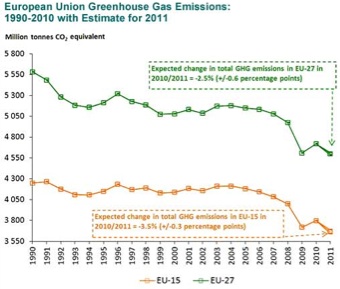 In addition to the short-term effect of these rules, coal has received a boost as European carbon dioxide emissions have plummeted. This has led to an oversupply of carbon dioxide emission permits, which cratered prices. But just like air pollution regulations, the European Emissions Trading System (ETS) is up for changes. The next phase of the ETS will see 100 percent auctioning of permits and will likely see the total supply corrected to adjust for these low prices. When that happens, coal traders will see a change in their fortunes as renewable energy additions and coal capacity retirements eat into coal-fired generation.

These low prices are increasing burn of the dirtiest form of coal -- lignite. Because lignite is more carbon intense the carbon price is a major factor in determining whether it is economic to sell lignite-electricity onto an electricity market or not. Because of the EU carbon price collapse lignite has been favored and it is the increased use of lignite that accounts for the increased generation of 'coal' fired electricity in Germany in the last 18 months. Given that lignite is the mainstay of much European coal use, it is the carbon price factor, which is vital to determining coal burn. When the ETS is adjusted, the economics for lignite coal will collapse.

On top of air rules and carbon pricing, national policies will also be important in dethroning king coal. The UK is introducing a floor price for carbon and a de facto ban on new coal (a carbon dioxide limit on new power plants that conventional coal cannot meet). The Dutch are introducing a coal tax, Denmark has announced a coal phase out and Finland is contemplating it. On top of that, the Spanish economy cannot sustain coal subsidies in the face of harsh austerity measures and German renewable energy growth will further reduce the available market for hard coal. All told, these policies create significant headwind for coal.

So you can see that this short-term 'renaissance' maks a long-term disaster for the coal industry. The real underlying trend is decreasing and less profitable conventional thermal generation (i.e., coal and gas). This of course is a long-term boon to the economic engine of the 21st century -- clean, renewable energy.

This post was co-written by Lauri Myllyvirta of Greenpeace International.