In the face of mounting criticism from human rights leaders like Malala Yousafzai, who have called Europe's response to Syrian refugees "pitiful", EU leaders have struggled to develop systems of collective responsibility for the refugees. Finger-pointing and a human rights tragedy of the commons has come to characterize tepid responses from Germany's Angela Merkel, the UK's David Cameron, as well as Hungary, the Czech Republic, Poland, and Slovakia.

The unease created by facts on this human rights tragedy has allowed specious analysis on Saudi Arabia's and other Gulf States' response to the crisis to proliferate throughout the West's media. Thanks to a technicality in counting refugees, hundreds of outlets from Amnesty International to the Brookings Institution have claimed that Saudi Arabia has taken zero refugees--a ludicrous, but rarely fact-checked statement given the comical lack of a "Great Arabian Wall."

Over the past several months, we have been constantly fed graphics and analysis like the one below from Luay Al-Khatteeb, a fellow of the Brookings Institution. They have indicated that Saudi Arabia, Kuwait, Qatar, and the UAE have apparently taken zero Syrian refugees. The claim has been cited by nearly every Western publication. A cursory search returns venerable sources including Foreign Policy, the Washington Post, and CNN all falling for the myth. 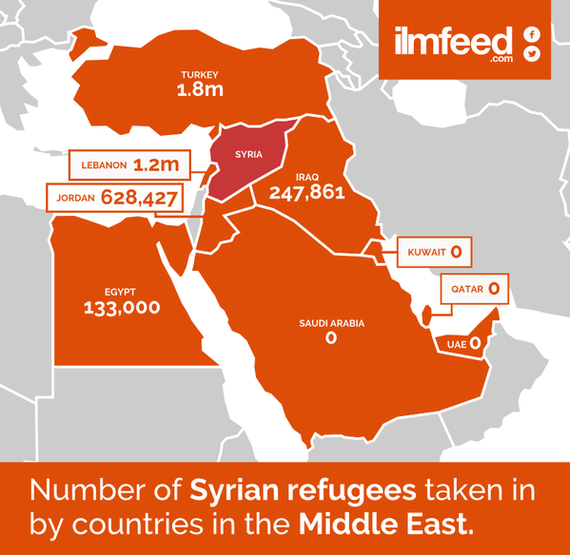 The above graphic was originally posted by Luay Al-Khatteeb, a researcher associated with the Brookings Institution.

The data source of all of these publications seems to be the UN High Commission of Refugees (UNHCR) itself, which notes that over 4,000,000 refugees have been registered by the UNHCR in Egypt, Iraq, Jordan, Lebanon, and Turkey. None of these refugees are registered in any of the Gulf States, including Saudi Arabia.

However, a look at Saudi Arabia's UNHCR page has a few curious footnotes that Western publications are conveniently omitting. The UNHCR counts refugees by noting only those "persons recognized as refugees under the 1951 UN Convention/1967 Protocol, the 1969 OAU Convention, in accordance with the UNHCR Statute, persons granted a complementary form of protection and those granted temporary protection." Saudi Arabia, Kuwait, Qatar, and the UAE are not parties to any of the UN protocols on refugees, and so through this technicality, they, along with most of their refugees, are excluded from many refugee counting mechanisms.

And as if the statement that Saudi Arabia has not taken any refugees were not preposterous enough, with the lack of a "Great Arabian Wall" of sorts, numerous commentators have conveniently overlooked the fact that the noted Gulf States are not included in maps of UNHCR progress reports like this one. One would think that such maps might raise the question, why aren't any of the Gulf States included in the graphics? And given their exclusion from many UN refugee graphics, one might also ask, is the absence of Syrian refugees in Saudi Arabia really due to an astonishingly secure border? Or just a technicality that pundits have deceitfully misinterpreted?

Somehow, even in today's "enlightened" age where information on human rights is democratized and widely disseminated, the complete absence of Syrian refugees in Saudi Arabia is more plausible than the idea of human misinterpretation of statistics. It's an inconvenient truth that needs to be addressed.

With Saudi Arabia's non-signatory status, the Syrians residing in Saudi Arabia are classified as "Arab brothers and sisters in distress" instead of refugees covered by UN treaties. According to Nabil Othman, the UNHCR regional representative to the Gulf region, there were 500,000 Syrian refugees in Saudi Arabia at the time of his statement. The government itself of Saudi Arabia has stated that it has, over the past five years since the start of the conflict hosted 2.5 million refugees.

Because the noted treaties establish treatment standards for refugees, some might raise concerns regarding the conditions that Saudi Arabia's refugees may be living in. However, Al-Arabiya, a news outlet based in the UAE, has noted that "Saudi authorities granted Syrians the right of residency and work, and provided them with education and health services for free." According to the Saudi government, over 100,000 children are currently receiving education in the country's schools. Saudi Arabia is not alone in attempts to provide education for the refugees, with Lebanon now providing schooling for another 100,000 child refugees.

The silence on this issue has redirected the conversation to an absurd idea instead of progressing towards verification of Saudi Arabia's treatment of Syrian refugees. By focusing on a myth that could easily be debunked with even a cursory look at the UN's procedures for publishing refugee statistics, the West's media organizations have been too distracted to verify the Saudi government's claims.

This entire matter has been quite illustrative of the pitiful proliferation of modern-day yellow journalism, where even the most bizarre misconceptions are palatable enough to become part of mainstream political debates. Syria's and Europe's human rights travesty needs no exaggeration. Merkel's, Cameron's, Eastern Europe's, and the US's pitiful responses cannot be excused by this lie. It has only served to tarnish the worldly reputation of revered organizations like the Brookings Institution and Amnesty International. The claim is the Birtherism of refugee policy, and it's time we put at least a modicum of effort into determining the exact conditions on the ground.

This post originally appeared on AmericaBlog.com, a site dedicated to commentary on American politics.