The so-called experts have said it over and over again: Homegrown radical Islam is a result of the failure of the Muslim community to integrate into their adopted home countries. This seems to be a valid assessment on the causes of the problem, but the devil is in the details and the deeper analysis of the clash of value-system that continues to tare the continent apart. How can EU craft effective, values-based governance solutions?

I'm no stranger to the subject of Islamic radicalization in Europe. I was invited to France to speak on the issue on two different occasions. The reactions to my presentations were a telling sign of how the French continued to ignore the gathering dark clouds over their country. The most recent conference was held at the Sorbonne. After giving a presentation on the value-systems based model for governance, I warned the French how their form of Social Democracy was threatening the very pillars of what France stood for. I then urged the leaders to move to a more conscious form of governance that can defuse the terrorist threat and promote multiculturalism. This is the Functional Democracy model, or more simply put Governance that Fits which I describe fully in my recent book.

My presentation at the time didn't receive as much attention as I thought it should. I wasn't sure whether the French were living in a bubble and simply ignored the problem, or that creating another social program will solve the issue. The audience was more interested in listening to the next speaker, a Hungarian philosopher in his 80s by the name of Ervin Lazslo, who spoke about death, and the Akashic Field Theory. At a subconscious level, it seemed to me that the French had given up on addressing problems plaguing their existential reality and turned to the ethereal life for inspiration.

The earlier conference wasn't that much different. Speakers ranged from a former Al- Qaeda recruit turned peace advocate to the former Israeli director of prisons. Many substantive recommendations were made but alas, most were dismissed on the premise that they don't fit French values. The day was punctuated by the occasional bashing of American leadership. After the conference, a French born professor from Algerian roots expressed to me the envy many French minorities have for the American model of democracy. He was in awe of a system that elected a black president and was resigned to the idea that such a thing will never happen in France.

These experiences were symptoms of the deeper dysfunction that lies beneath many of the social democracies in Europe. It seems to me that after the end of WWII the entire continent abandoned old European prejudices and ideologies and with them, they abandoned any desire to assess capacities within cultural groupings on their levels of social and psychological development. Because of the heavy burden of guilt, these challenges were associated with religious, racial and ethnic profiling and had no place in modern day Europe. Adding to this side of the equation, the Europeans felt responsible for many of the atrocities taking place in their former Middle Eastern colonies. Thus, a new European experiment with egalitarian values began.

In a world of homogenous values and congruent levels of cultural development, integration is rarely a problem. Tribes can learn to co-exist with other tribes. The Enlightened philosophers of France can co-exist with their counterparts in Germany or England. The enterprising mindset of Americans can co-exist with so many others in Europe, Japan, and other industrialized countries. The problem comes when cultures that are realized in more complex values believe that non-Western tribal cultures can assimilate by the sheer act of placing them in more advanced surroundings. This is only partially true. There are other factors that should be considered, like the urgency on the part of the host country to instill the values of patriotism. It is in the nature of the egalitarian value system to make the lives of immigrants as comfortable as possible while ignoring the delicate balance between comfort and self-reliance. It is in the ethos of self-reliance within the safety of Western values that the hard work of assimilation happens.

To readers with progressive values, this is where the reading of this piece ends, but to those who are seeking a higher level of consciousness that moves beyond political correctness and arrested views, I urge you to read on. In the interest of full disclosure, I come from Lebanon. I have been a student of the Middle East's political and religious culture for decades. As I studied the value systems model, I quickly came to the realization that there are no so-called nations in the Middle East. Tribalism, nepotism and feudalism are the values that rule the region today. Nation states require the belief in abstract concepts like the rule of law and the myriad of institutions that guarantee the equal treatment of all citizens. This is the fourth level of existence under the value systems model and historically the most difficult for a culture to enter into, but a necessary foundation on which higher value systems are built. Today, industrialized countries are somewhere in the 4th, 5th, or 6th level value systems. They didn't emerge there by accident, but through decades of war and bloodshed that is identified with the 3rd level system of values.

The Middle East today is a collection of feuding tribes that were forced together by colonial powers under a common flag. They exist in the second and third level systems; the 3rd level historically has been the bloodiest of all stages of existence. As much as some in the West would like to blame the problem on Islam, in reality the whole issue is a value systems problem that uses Islam as a conduit to express itself. Just as European warriors in the Crusades used Christianity as a conduit to express their cultural presence in the 3rd level system. These transitions seem to be a rite of passage for all cultures as Karen Armstrong, a British scholar points out:

The 3rd level of values is the bloody phase of human existence. It is the human ego in raw form. It blames its misery on an enemy of mythical proportions. It can easily be weaponized as it seeks to go out in a blaze of glory. It hides behind religion to exact its ugly deeds until it gets to a point of "never again". Although these are classical characteristics of the 3rd level of values, there are modern ways to channel their heroic raw energy. 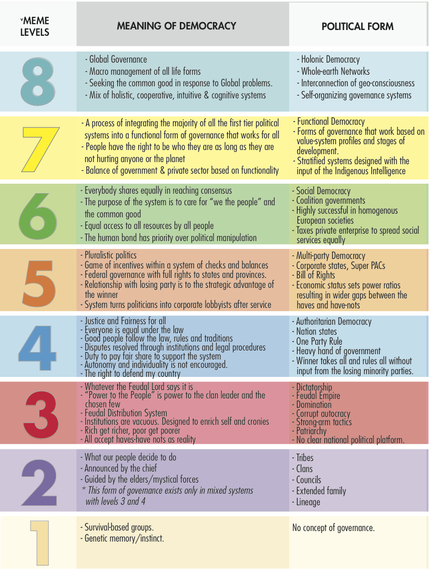 Nationalism and patriotism is what's next for cultures existing in the 3rd level system, not the egalitarian values of the 6th level system that most of Europe identifies with. The West must surround its non-Western immigrant population by values of this 4th level of existence, keeping in mind that many of these immigrants are - for the first time - living in cultures defined by a multitude of institutions, not the traditional tribal power brokers. This is an entirely new psychology that must be taught. It is crucial for the West to hire the right teachers who can accommodate this critical transition. These are the experts of both worlds, what I call the Indigenous Intelligence Experts. From Imams to social workers, the West needs to recruit an army of IIEs who speak the language, understand the background of these immigrants but are fully entrenched in Western values.

To diffuse the blaze of glory and the raw ego, the West must direct young immigrants into activities that absorb their energies, while containing it within Western 4th level values.

Meaningful sports tournaments that reward the winners with a patriotic achievement award is one example. Enrollment in a Peace Corps-like organization that builds benevolent values, then dispatches its graduates to express their heroism by helping Muslim villages throughout the Middle East and North Africa with challenges they face.

These are just a few examples that demonstrate how integration requires active and functional engagement of the adoptive countries. This is what's needed not the passive values of the progressive 6th level system, which is dominated by the egalitarian view that misses the functional nuances that lead to better integration.

While the West has taken for granted the cultural complexity it has built over the centuries, it should not assume that everyone is ready to assimilate into it without proper guidance. Beyond Europe's Social Democracy lies a world full of cultural complexity that requires a more inclusive form of Patriotism. This is humanity's new frontier guided by the values of what I call Functional Democracy.