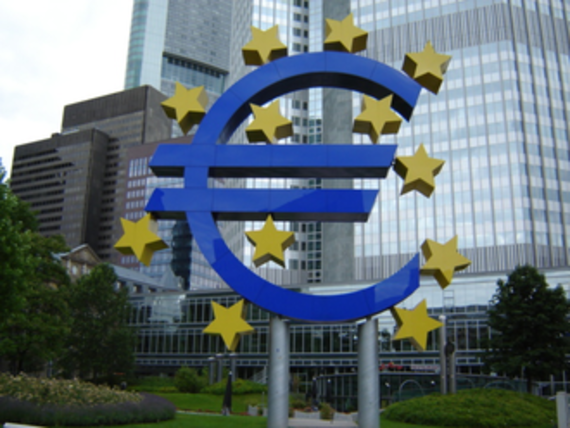 Headquarters of the European Central Bank

A new financial crisis is brewing in Europe, one that will prove as devastating as the last economic crisis. This one will also be centered in southern Europe--only this time, instead of the sovereign debt of the region's governments, it will involve the commercial banking sector.

The last European financial crisis was triggered by sharply escalating interest rates on the government bonds of the EU's southern members: Greece, Cyprus, Italy, Spain and Portugal. Ireland, at the other end of the EU, was also included. Those countries debt levels were increasingly seen as unsupportable, given their deteriorating economies, raising fears of a default. Given that much of this government debt was held by European banks, a default by one or more countries threatened the stability of Europe's entire banking sector.

The EU responded to the crisis by implementing a series of financial support mechanisms, such as the European Financial Stability Fund and the European Stability Mechanism, to provide emergency loans to those countries most affected by skyrocketing interest rates. The European Central Bank also acted to lower interest rates, in some cases by buying government bonds and private debt, and providing low interest loans of more than one trillion euros to ensure the liquidity of Europe's banking sector.

In the case of Greece, EU members agreed to write-off about 50 percent of the face value of Athens's sovereign debt, as well as provide a series of loans to keep the Greek government solvent. Despite never ending discussions on renegotiating Greece's debt, the crisis, now into its fifth year, shows no sign of resolution.

In the case of Cyprus, the EU introduced a new concept, the "bail-in" as opposed to the "bail-out." In a bail-in, creditors and depositors of an insolvent bank are expected to help in its recapitalization by foregoing a percentage of their claims. The concept has since been enshrined in EU law. Depositors and creditors must now write-off eight percent of their claims before public funds can be used to recapitalize a failing bank.

Italy will be the nexus of the banking crisis, not only because it has the highest level of nonperforming loans in the EU's banking sector, but also because it has a highly fragmented banking industry characterized by high operating costs. Italy has over 500 banks and, according to the Guardian's Jill Treanor, "more branches than restaurants dotted across the Eurozone's third biggest economy." 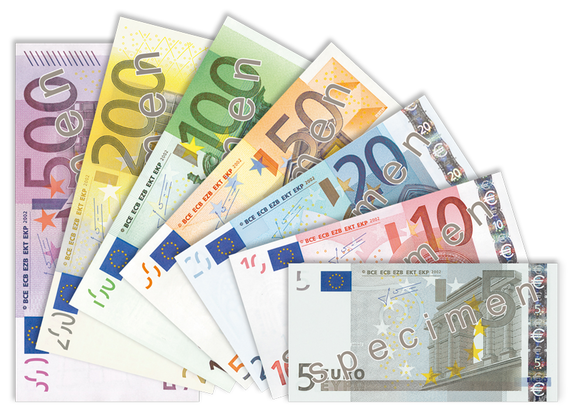 The euro is now the common currency of 19 European Union members.

Rome has responded to Italy's developing banking crisis in three ways. First, by creating a back-up fund, named Atlante, to bailout insolvent banks. Capitalized at 4.2 billion euros ($4.7 billion) by the banking sector itself, its function is to provide emergency loans to failing banks. Secondly, by allowing banks to package nonperforming loans into asset backed bonds carrying a government guarantee so they can be sold off to investors.

Current EU rules do not allow member governments to bailout insolvent banks by creating "bad banks" to hold their nonperforming loans. The bond plan skirts the EU prohibition on bailing out banks, and may yet be challenged by the EU. Finally, the Italian government has introduced legislation to streamline the process of foreclosing on bankrupt properties. Currently, it can take as long as 15 years to repossess a property.

Italy's problems with its banking sector are only the most recent manifestation of a far deeper problem that is affecting all of the EU's southern European members, a fundamental lack of economic competitiveness. The one exception has been the tiny island of Malta, also a EU member, whose booming economy has not been affected by the problems of its Mediterranean neighbors.

There is a growing and fundamental divide between the economies of the EU's northern tier and that of its Mediterranean fringe. Years of persistent inflation, much of it under-reported, have made the EU's southern economies increasingly uncompetitive. Before the creation of the euro, governments were free to devalue their currencies to adjust for persistent inflation and restore their economic competitively. In the case of Italy, this was a regular and predictable event. When currencies were freely trading, market mechanism would make these adjustments automatically.

In light of a common euro currency, however, such adjustments are not possible. The only alternative is either a painful structural reform, as Greece has been forced to attempt as a condition of its bailout, or an exit from the common euro currency. Neither option is particularly attractive. The sort of structural reforms that would restore economic competiveness would require a sharp reduction in government spending and a significant reduction in wages. This is neither politically, nor always legally, feasible.

A euro exit is equally problematic. Since all of the debt is denominated in euros, an exit, and the reissuance of a national currency, would increase the face value of those existing debts by the same percentage that the new national currency was effectively devalued. While estimates vary, it is generally believed that the EU's southern members would need to devalue their currencies by between 20 to 30 percent to restore their economic competitively. The discount that their currencies would trade for relative to the euro would be even greater than that, unless investors were convinced of these governments newly found fiscal prudence. 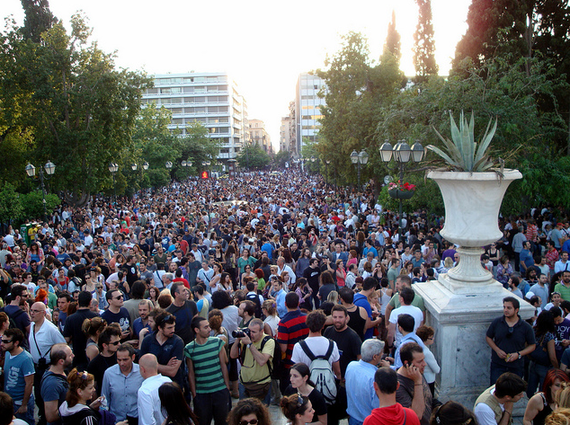 Greek protests against austerity programs, May 25, 2011.

Borrowers could be given the option of paying their euro debts with the new currency at some artificially set rate. Argentina tried that trick when it defaulted on its U.S. dollar denominated external debt. That's the same as a partial write-off of that debt, and transfers the loss to the debt holders. Alternatively, borrowers can buy euros at whatever market rate is established, and pay back their loans but end up being saddled with much higher loan balances denominated in the new currency. Its unlikely most companies could withstand the shock of that dramatic an increase in their outstanding loan amounts.

The EU's richer members, all of whom are in the north, could continue their transfer payments to their southern neighbors, but those governments have made it clear that they are not willing to finance ever growing subsidies, nor do they have the political support, to continue to underwrite southern Europe's dolce vita.

One solution would be to split the euro into two currencies--a soft euro for southern Europe and a hard euro for its richer northern members. The soft euro would trade at a discount to the hard euro, allowing some of the benefits of a devaluation, but possibly mitigating the extreme discounts that a complete euro exit would create on the newly issued national currencies, as well as preserving some of the advantages of a common currency.

Europe's northern and southern economies are on divergent paths, one that will make it increasingly difficult to function in the context of a common currency. Without an apparent solution in sight, the EU has been content to deal with each successive crisis as it comes up and postpone dealing with the long-term problem. In the meantime, the next European financial crisis is inexorably building.