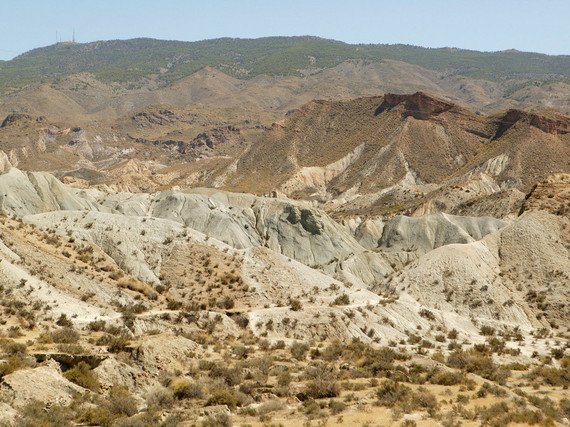 What's the only continent without a single desert? According to the popular trivia factoid, the answer is "Europe." But that's not strictly true. There are a number of semi-arid spots dotted around Europe that qualify under various geographical definitions of "desert," none more certainly than the badlands of southeastern Spain. The Desierto de Tabernas there is often called "mainland Europe's only desert."

The rain in Spain does not stay mainly on the plain.

The city of Almería, on the Andalusian coast, is world-renowned for its Moorish architecture and sunny beaches. But just 20 miles north of town, the landscape is very different: a hot basin sandwiched between two low sierras. Wet winds coming in from the Mediterranean drop all their moisture in the hills, and their "rain shadow" forms the arid Tabernas Desert.

A little bit of Arizona, just north of the Costa del Sol.

Tabernas is no desert in name only. In the summer, temperatures can reach 118º, as hot as anywhere in Europe. Less than three inches of rain fall in the dry season, and what does come usually arrives in torrents, eroding the sandstone into dramatic mesas and gulches. Snakes, lizards, and cacti are common.

Tabernas is the Hollywood of southern Spain.

In fact, the rugged landscape of Tabernas makes it a dead ringer for much of the American southwest, so it's become a popular location for movie crews. Sergio Leone filmed his famous "spaghetti westerns" there. The three mock-Western towns where he shot Once Upon a Time in the West and other classics have been made over as Wild West theme parks, where tourists today still enjoy re-enacted gunfights and roundups.

Greece, Romania, and Iceland have their own semi-deserts.

The land around Almería may look more like the Old West then anywhere else in the Old World, but it's far from the only spot in Europe that's arguably a desert. Sometimes that's a result of climate, as in the case of Santorini and Anafi, two Greek islands that the Köppen system classifies as BWh: hot desert. Sometimes it's due to deforestation, like a plain in Romania that locals have called "the Oltenian Sahara" since the trees were chopped down under Communism. The interior of Iceland might be the most interesting pseudo-desert in the world: there's plenty of precipitation, but nothing ever grows there because the porous lava rock absorbs it all as soon as it falls.