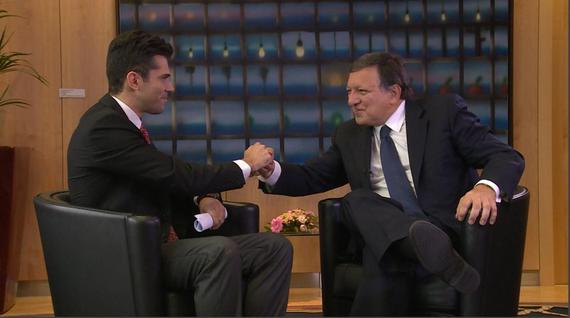 Having recently had a most interesting interview with the European Commission's president, José Manuel Barroso, I realized how much Europe struggles to tackle contradictory interests and views in a unified framework of solidarity among European members' states. What I noticed then was that the word "solidarity" was mentioned several times by Barroso while we were sitting across from each other. He seemed determined to give no excuse to countries, like Germany, which are not utterly devoted to the efforts of keeping Europe a common union. A common union in which rules are not imposed by the one who is politically and economically in charge. However, Barroso avoided referring to the real problem that Europe has been facing for a long time, making people throughout the european continent feel very frustrated.

The current image of the Troika-led Europe, managed by Brussels-based bureaucrats with no constant accountability to people, has nothing to do with the real goals and priorities of Europe when it was founded more than half a century ago. Every day the quality standards of living for millions of Europeans is affected today by hard austerity policies which are not defined by the respective national governments but are imposed by few non-elected and well-paid bureaucrats in Brussels. During the period of time I was working there as a foreign correspondent, I realized that what is called "European family" is actually just a "clique" consisted of employees enjoying special privileges and doing a lot to broaden the gap that exists between the European institutions and people.

I was taken by surprise last year when I was walking over the European Commission building and I saw there a lot of its employees be on strike and protest against cuts on their wages paid by the European budget. Pay close attention to this oxymoron: the European Commission employees refuse to accept reduction in their salaries when at the same time their institution introduces austerity policies for public and private sector employees in many European countries in the name of "competitiveness."

Europe is suffering not only by a lack of democracy in the way of its internal function, but also by a lack of morality. It is immoral for the European Union to be working under blackmail and ultimatums to member states, as we have seen this happening in Greece and in other countries which are under a bailout program. It is unethical from the European Union economic policy issues to be managed by some appointed technocrats in "Troika," who are behaving like local dictators in the countries replacing the role of elected national governments. Greece is an example since the so-called Prime Minister Antonis Samaras and the New Democracy-PASOK governmental alliance do not actually rule the country, as the Troika is that which takes the decisions. Ιt is immoral the European Union to divide its member states between economically strong and weak, between superior and inferior countries.

I went to Brussels as a pro-European, but I left much more euro-skeptic than I have ever been. If Europe wants to stop its dismantling, it should start from scratch. But I have my reservations whether there is time for that or Europe's way toward its self-destruction is simply irreversible.