It is made of solid steel with a satin finish and a band of 28 diamonds -- but bizarrely has a guitar pick attached and the lyrics from Stewart's latest solo song, Let's Do It Again, scrawled on it.

Owners also get a code that allows them to download the tune.

Married dad-of-four Stewart had a string of hits, including Sweet Dreams (Are Made Of This), with Eurythmics singer ANNIE LENNOX. 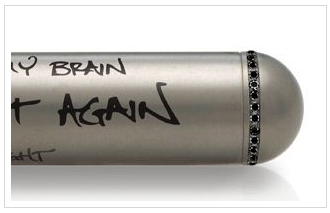 From the product description:

Co-founder of the multi-platinum band, Eurythmics, Dave Stewart sold more than 75 million albums with partner Annie Lennox, and over 100 million more through collaborations with artists including Bono, Mick Jagger, Bob Dylan, Tom Petty and Gwen Stefani, among many others. Stewart's collaboration with Jimmyjane comes on the heels of his launch of Rock Fabulous, a concept brand that embraces the empowerment and attitude of rock and roll.