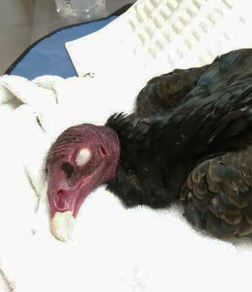 The California Department of Fish and Wildlife (CDFW) has confirmed that several turkey vultures have been poisoned from the veterinary euthanasia drug pentobarbital in Marin County, California.

Six turkey vultures (Cathartes aura) were brought to WildCare's Wildlife Hospital in San Rafael, California between July and October 2014. All the birds were comatose and barely breathing, presenting a medical mystery to the Wildlife Hospital staff.

With immediate and intensive medical intervention (see video below), all of the birds recovered, and digestive samples were sent to a laboratory to determine what made them sick. CDFW confirmed pentobarbital exposure in all birds tested, but the source of the exposure remains unknown.

Pentobarbital is a drug used by veterinarians to euthanize companion animals, livestock and horses. If the remains of animals euthanized with pentobarbital are not properly disposed of after death, scavenging wildlife - such as turkey vultures and eagles - can be poisoned. Veterinarians and animal owners are responsible for disposing of animal remains properly by legal methods such as cremation or deep burial. 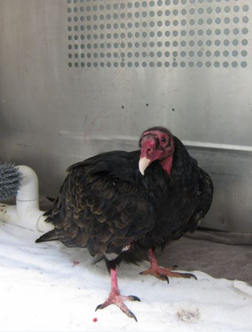 Turkey vultures are protected by the federal Migratory Bird Treaty Act and California Fish and Game Code. Improperly disposed-of euthanized remains are a danger to all scavenging wildlife.

Members of the veterinary and livestock communities are asked to share this information with colleagues in an effort to prevent further incidents.

WildCare also asks the public in the San Francisco Bay Area and beyond to pay attention to grounded turkey vultures and other raptors and scavengers.

Pentobarbital-poisoned birds appear to be dead. They have no reflex response and breathing can barely be detected. The birds appear intact, without wounds or obvious trauma.

WildCare Medical Staff were baffled when the first of these poisoned patients arrived at the Wildlife Hospital. How do you treat a healthy-looking but comatose vulture? Unfortunately the solution quickly became obvious as the bird's crop began to fill -- these poisoned vultures needed to vomit, and Medical Staff would have to help.

Watch the video below of WildCare Director of Animal Care, Melanie Piazza helping this comatose vulture to vomit.