Claude Monet passed by the idyllic village of Giverny, France, on a train ride one day, and quickly decided to set up shop. The Impressionist artist lived there from 1883 until his death in 1926, painting dreamy renditions of the ponds, bridges and epic waterlilies on site. In a curious twist to Giverny's history, photographer E.V. day invited performance artist Kembra Pfahler to join her in reproducing the gardens immortalized in Monet's paintings. Scroll down for a slideshow of their collaboration.

Pfahler, who is best-known as the lead singer of The Voluptuous Horror of Karen Black, dons head-to-toe body paint in this project, transforming her into the progeny of Barbie and the Bride of Frankenstein (no man was necessary to create this creature). Her unnatural appearance looks especially jarring against the idyllic floral backdrop. Yet the more time one spends looking at Giverny, the more the landscape begins to look unnatural rather than the curious pink figure in the forefront. As the gallery expressed: "The gardens themselves are in many ways a controlled and sculpted landscape, an illusion of chaos." Monet supposedly had gardeners regularly clean soot off the lily pads in order to keep their appearance pristine. The overflow of greens, arranged just so, are almost as claustrophobic as they are calming.

Day digitally manipulates her images, mirroring the primping process of the gardens, and even followed the gardeners during their daily duties to examine their process. Day has long focused on issues of female sexuality and pleasure, and here the natural forms lead her questioning of what is natural, unnatural and possible in terms of female power and sexuality. This monumental project is now on view at The Hole Gallery in New York, which is transformed into an emerald garden, filled with wildlife both real and fake. Whether you find it beautiful or ugly, challenging or frightening, you will certainly not be bored. Because we were curious about the making of the project, we asked Day and Pfahler about their work. 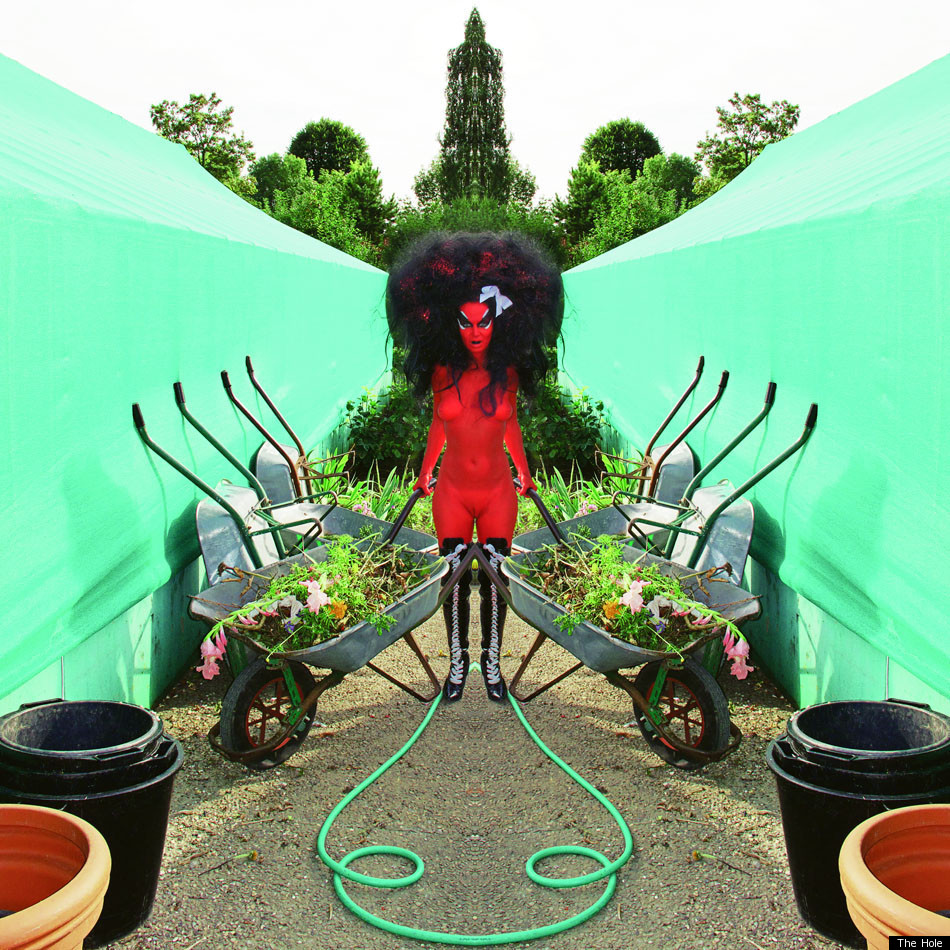 HP: E.V., why did you invite Kembra to join you in the project?

ED: I went to Giverny as the Munn Artist-in-Residence of the Versailles Foundation and lived on Monet’s estate for nearly four months in 2010. The first day I arrived in Giverny, in late May, I was given a key to the garden and went to the famous water lily pond. Standing on that green bridge looking out at the landscape -- it looked like a Monet painting, of course, but also like a stage, waiting for action. Almost instantly I imagined that the garden needed Kembra’s Karen Black character, in hot pink to match the waterlilies, and her black hair, teeth and boots matching the reflective blackness of the water. The costume of the Karen Black character -- as considered as the design of a Chanel power suit -- is a twist on the nude; it’s iconic, and speaks to notions of feminine glamour, creativity, power, and there’s a lovable comic element, too. Compositionally, her image seemed like the perfect centerpiece to the luscious garden that has been so still and so fixed-in-time for over one hundred years.

HP: What lead you to exploring sexuality in this piece? Is this inherent in the nature of Giverny or is it something you're adding to it?

ED: Spending time in a garden as dense as Monet’s, you can’t escape the fact of being surrounded by a reproductive orgy! Itʼs so sexual -- granted in a G-rated kind of way -- and some of the first work I did at Giverny was about that feeling of being enveloped by the flowers. I would follow the foundation’s team of gardeners in the morning, collecting the flowers that they had dead-headed and tossed into wheel barrows. (The flowers weren’t necessarily wilted; these were blooms at their very peak, that the gardeners knew would be faded by afternoon). I scanned these flowers at super hi-res, zooming in on their reproductive organs to enable you to see just how alien, beautiful, and complex the architecture designed to attract pollination is. I ended up enlarging these images to six-foot squares to create my photographic series "Seducers".

I was hyper-aware of the procreative, birds-and-bees sexual aura in the garden, and I think that’s the backdrop that makes Kembra’s presence there alluring and sort of inevitable. There is a dark side to beauty that is metaphorically reflected in the black pond and I felt Kembra was a perfect archetype to express that there. She embodies the darkness in extreme beauty, the goth in the glamour, each one reinforcing the other. And I wanted my photos to emphasize the romantic, beautiful, adorable, otherworldly, queen-of-the-jungle aspects of her character instead of the obvious, easily dismissible tableau of a punk-rock gore-girl in Monet’s garden. What to me is so magical about these pictures is that there is a harmony between Karen Black and Monet’s garden as opposed to the assumed contrast. But there is mischief! The sexy thing for me in the photos is how she appears to possess the garden: “This is my garden, baby, and itʼs just you and me.” She just owns it, luring you in like a flower lures a bee. 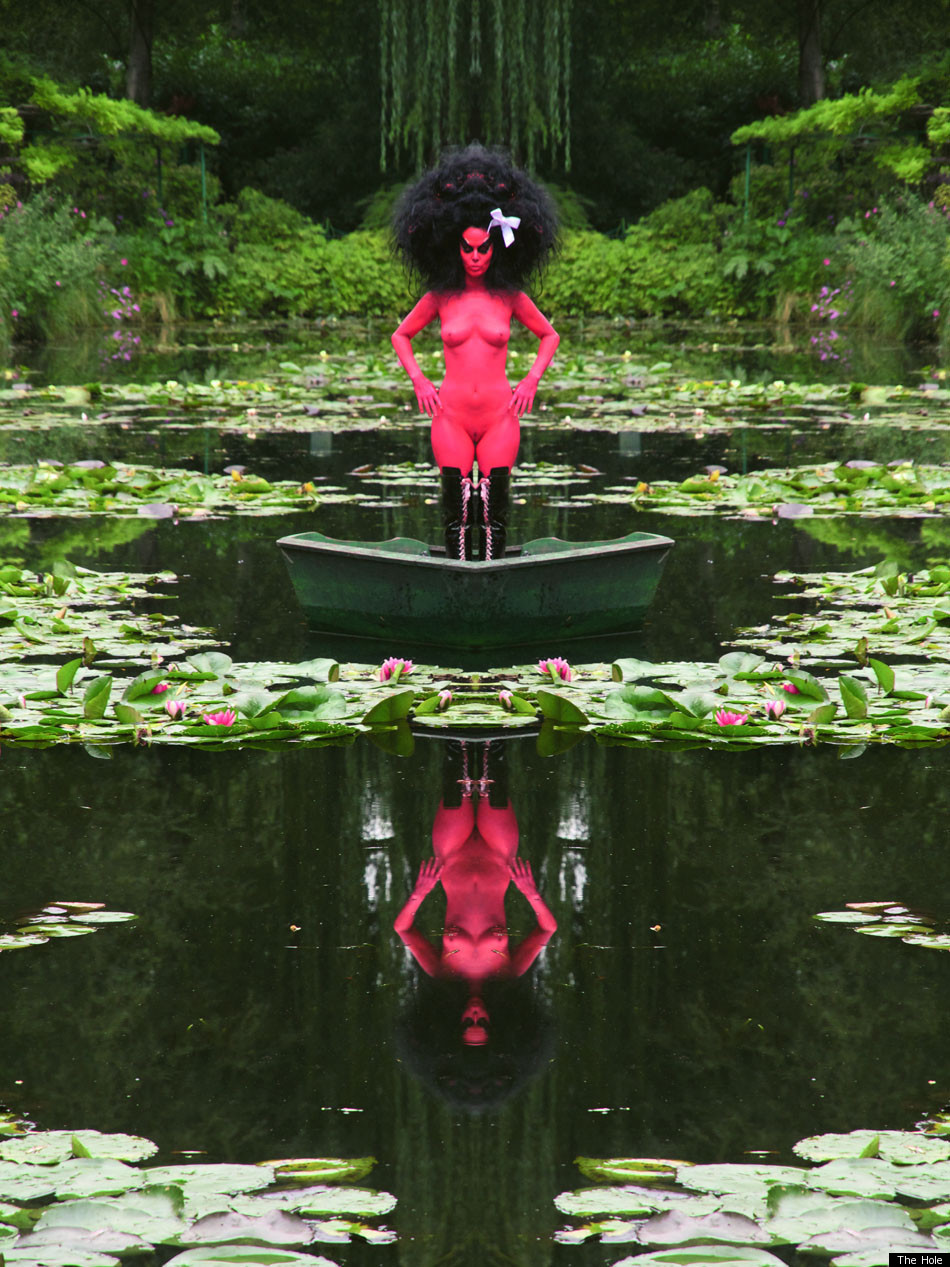 HP: Kembra, what first drew you to Monet and Giverny?

KP: What first drew me to Monet was E.V. Day. She is an artist I initially collaborated with at Deitch Projects. I never had any interest in impressionism. It seemed like an auntie's art form. Innocuous and not relevant in today's culture. In the dark times we exist in New York City, in our constant state of terror, E.V. Day turned the lights on and raised my consciousness about the history behind Monet and his singular vision. That's the fun in collaborating with another artist. You go to places you may not normally go. E.V. is one of the smartest people I know, and I loved learning about Monet's singular vision, about how he painted the black pond ... and the lilies. His process is the antithesis to the world I occupy -- that of anti-natural endurance.The way we deal with time in the city is so punishing, rather than quietly waiting for the light to change, or flowers to bloom.

KP: Playboy has traditionally supported many different kinds of minor to major cultural icons and artists. We don't have a ministry of culture here, and artists are essentially devalued as obviously we are a celebrity-oriented culture, largely obsessed with money property and prestige. If "celebrity is the mask that eats the face" as [John Updike] once was quoted as saying, then the artist makes a face made out of chocolate. We transform ... we can turn ugly shit into something understandable, or at least provoke conversation about what we are actually doing. So we have somewhat different ways of getting support for art projects now. We are all mostly interdisciplinary now ... and availablists ... making the best use of what's available.

As far as how Playboy represents female sexuality... Well, I love the cartoon drawn by Leroy Neiman. She has been in Playboy for 50 years. The centerfold girls are adorable to me too. Playboy presents female sexuality very sweetly and wholesomely which I love. Our culture is still traditionally misogynist; women are simply thought of as less than men. It's my job to present a different paradigm of visibility for what a woman can be or what she's looking like. And I think it's cool Playboy is open to that.

HP: What is “availabalism” and how does this idea affect your artwork?

KP: Availablism is making the best use of what is available. It affects my work because it has made me interdisciplinary by necessity. I think it's important not to be beholden to commerce to be a productive artist. Some weeks we can make drawings from paper at Kinkos ... Some months there's money for movies ... Some years there's just stuff you find and "upcycle" -- it shouldn't matter. Art is about good ideas, and provoking discussion, and making life more beautiful through extreme decoration. If that seems un-strategically optimistic, you are wrong. It takes a lot of study and concentration to cut out the bad parts.

HP: In your exhibition last year with Bruce LaBruce ("Wall of Vagina"), you wrote, "It provokes a complex reaction from the audience who don’t know whether to applaud or vomit." What does this new exhibition say about the relationship between sex and horror?

KP: This exhibit has a lighter touch and the content and action in the modeling is less transgressive. I felt like Boris Karloff picking daisies on a film set in the movie "Frankenstein." It was like I was brand new and seeing nature for the first time. I was so grateful to E.V. for including me in her project. I was in tears sitting on the pond; I wanted to tread lightly on the delicate flowers, so I walked softly. I wanted to be as beautiful as possible in the pictures.

"Giverny" will show until April 24 at The Hole in New York.

What do you prefer? Monet's Giverny or Pfahler and Day's? Let us know! 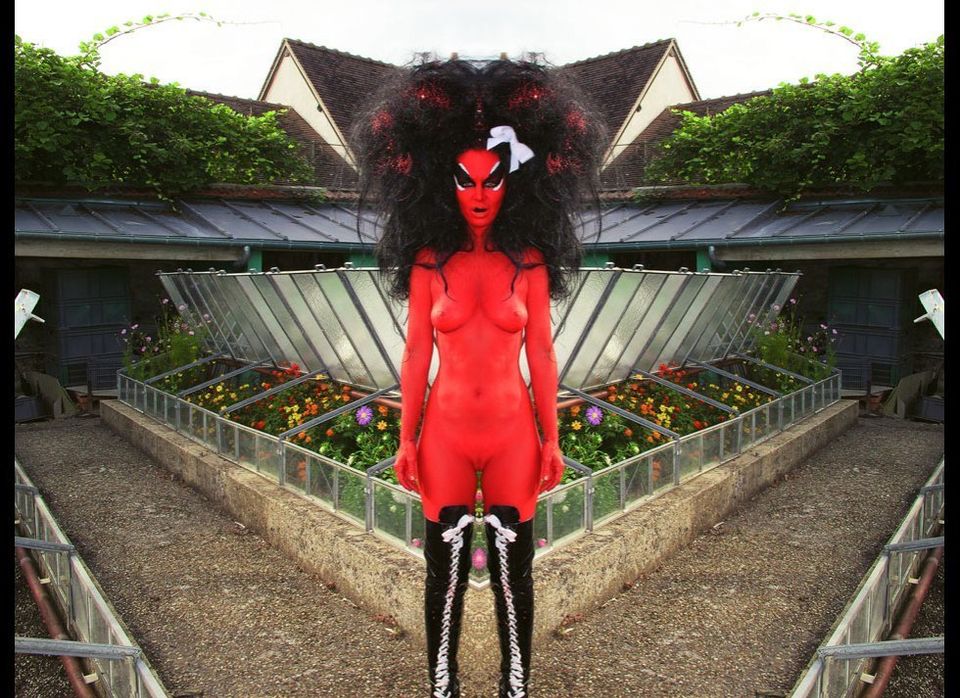