Eva Mendes, who entered Utah's Cirque Lodge for rehab earlier this year, recently spoke about substance abuse with David Colman for Interview magazine. "I"m not angry," said the actress, who stars in the upcoming The Women (due out in September) and The Spirit (due out at Christmas). "I'm proud of people who have the determination and the fearlessness to actually go and face their demons and get better. This is a life or death situation."

The L.A.-born, Cuban-American actress also opened up on racism in the entertainment industry. "What makes it frustrating is when a director or a studio head doesn't see me for the same part that they'll see, let's say, Drew Barrymore for," she said. "Drew's a great friend of mine. But it's like, 'No, we want more of an American type of girl.' And it's like, America has opened up. I'm an American girl, born and raised." Still, she insists, being Cuban-American is "not as difficult as it is being an Asian girl."

An excerpt of the interview, and selected photos, are included below. For the full article and photos, pick up a copy of Interview, which hits newsstands July 15. 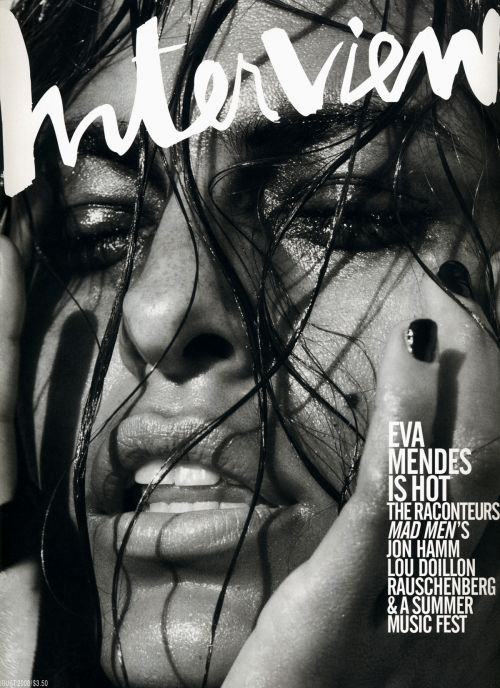 Excerpt of interview on substance abuse

DC: First of all, what is it with actors and substance abuse?

EM: I don't know. I'm not a spokesperson for any kind of substance-abuse organization.

DC: They're going to have to change the name of it to "Alcoholics Unanimous."

EM: I'm not making jokes, because people die from this stuff. So, honestly, I think it's a bit tacky that you made a joke. I've got to be honest.

EM: I'm not angry. People have died, and I've lost friends too--even recently. So I can be a little
sensitive on the subject.

DC: Look, I haven't had a drink in 11 years. I'm just trying to be light-hearted about it, because it's an awkward topic.

EM: I'm not angry. But because celebrities' lives are so visible, I think it makes it look lighter than it is. I have a really good sense of humor, I'm just very sensitive. The other day I was reading an article. I don't even remember who the actress was, but she's been around for a long time. She said something like, "I'm proud that I've had a whole career without making it to rehab." I thought, That's such a negative twist on it. I'm proud of people who have the determination and the fearlessness to actually go and face their demons and get better. This is a life or death situation. Again, I'm not a spokesperson for this, but it's just that I want to support people for their decisions when they do go in and get help.

DC: You might think it's a new problem, but it's probably only because people are quicker to say, "Okay, I'm going to rehab. Let's get it over with."

EM: It's because everybody is so highly visible now. We see everything. We see what celebrities buy at the supermarket. It's ridiculous. It's that visibility. I'm confused by this whole celebrity-obsessed culture. It's really weird.

DC: Again, I wasn't trying to be . . . Well, I was trying to be flip, but not trying to be dismissive. I do take it very seriously myself. You could just say, "I don't want to talk about that." Which is fine.

EM: I've given you a more interesting answer, I hope, than to just say, "I don't want to talk about it." [laughs] There are so many lies out there regarding my recent trip to Cirque Lodge. But I don't care what people think. I just don't care. So I will neither confirm nor deny. I think now we just know way too much about our celebrities. It's not that interesting when you know that much about people. I have no ego about me. It's just better for you not to know, because it really
does make me a better actor at the end of the day. You're not going into the movie with all
these specifics about me.

EM: You know what? You wouldn't feel that bad, because so much of it is not true. Actually, the
media has been pretty nice to me. They've really trashed some people, so I'm actually thankful that it didn't get too crazy. But for all the stuff that came out a few months ago about substance abuse, there were so many wrong stories. I was so happy about that, because it's when they get the real scoop that would make me really nervous. It's a relief, in a way. You want it to be a lie, because when it's true, that's when I'd be like, "Oh, my God!" It's time to rethink who's in your circle, because stuff got out.

Excerpt of interview on being Latin in Hollywood

DC: I have a question for you that's a little more complicated. Do you find it a challenge being Latin in Hollywood?

EM: I would never call it a challenge. I think being a woman in Hollywood is a big enough challenge. It really is, man. I don't want to be one of those people who complain. But the lack of roles out there--it's unbelievable. I read a lot of scripts. I believe you've got to read one that you know you're not going to do, because you've got to educate yourself on what's out there to make the best decision for you. So it's challenging being a woman. Then there are other kinds of
obstacles that come your way, but there are many times that being Latin has actually helped
me, being a Cuban-American has helped me.

DC: I think it makes you seem very modern and real.

EM: Absolutely. Because whether you like this next statement or not, we are the future. I mean, we're all just mixing together that much more. We are the future in that sense. I don't mean Latinos, I just mean ethnic diversity. I speak English without an accent, and I speak Spanish
without an accent. I really do have the best of both worlds. What makes it frustrating is when a
director or a studio head doesn't see me for the same part that they'll see, let's say, Drew
Barrymore for. Drew's a great friend of mine. But it's like, "No, we want more of an American type of girl." And it's like, American has opened up. I'm an American girl, born and raised. I mean, I was into New Kids on the Block, just like Drew! Actually, I shouldn't say that. I don't know if she was. I'm going to text her on that one.

DC: I was reading recently about Rita Hayworth.

DC: She was half-Latin, and she changed her name to her mother's maiden name. Her mother actually was Irish-American, and her last name was Hayworth. She also plucked her hairline so she would look more aristocratic. A lot has changed in 60 years. Back then, I don't think anybody was really ready for somebody with a Latin last name. Obviously, so much has changed. I was wondering if you feel, like, "Yeah, it's changed, but it hasn't."

EM: No, I feel it's definitely changed. Thank God. We are moving forward. Every time there's another successful Latin actress, that's just better for everyone involved. Now, I want to see more Asian girls. People ask me if it's difficult being Cuban-American in this industry. I say, "You know what? Not as difficult as it is being an Asian girl." We have so many Asian girls in this country, and they're so not represented up on the screen. 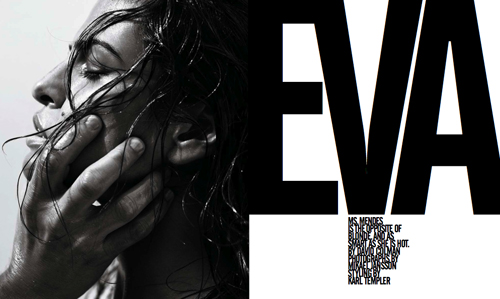 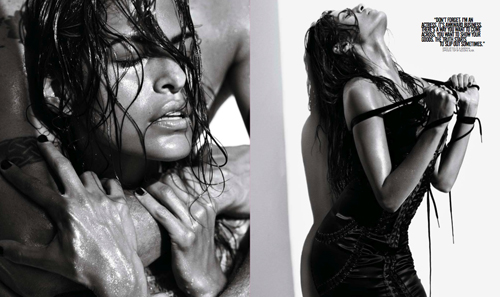 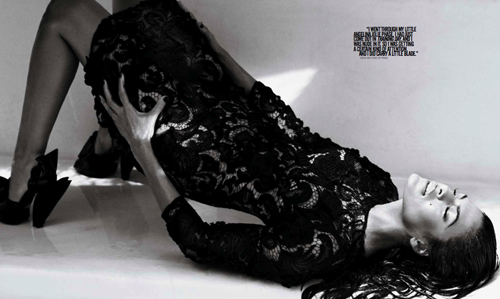 For the full article and photos, pick up a copy of Interview, which hits newsstands July 15.