One of Britain's richest men, Hans Kristian Rausing, has been detained for questioning after his American-born wife, Eva Rausing, was found dead in the couple's multimillion-dollar 5-story mansion on Monday.

The death has officially been reported as unexplained, with The Telegraph adding that the mother of four may have died of a drug overdose. Eva, 48, was discovered in an upstairs bedroom after her husband was arrested by UK authorities on suspicion of possessing drugs.

Eva faced trouble in 2008 after she allegedly attempted to smuggle drugs into the U.S. Embassy in London. The charges led to a search of the family's home where officials found crack, heroin, and 52 grams of cocaine. "I hope in due course to get back on track," Rausing said at the time, reports ABC News reports. "I am sorry for the upset I have caused."

Rausing and his wife have previously donated large sums of money to anti-drug charities, including the Mentor Foundation, an international program that steers youth away from drug use and abuse, reports the Guardian.

Hans is the heir to billions of dollars generated by Tetra Pak, a company his father founded in Sweden that invented the now-ubiquitous watertight cardboard carton. As of March 2012, Hans had an estimated net worth of $10 billion, according to Forbes.

A statement released Tuesday by the Rausing family to ITV News reads:

Hans and Märit Rausing and their family are deeply shocked and saddened to hear of the tragic death of their daughter-in-law Eva Louise Rausing. They ask that their privacy be respected at this sad time.

Eva's family also released a statement to the media on Tuesday:

Tom and Nancy Kemeny along with all of their family are deeply saddened by the death of their beloved daughter, Eva Louise Rausing. Eva was a devoted wife for twenty years and mother of four much loved and wonderful children. During her short lifetime she made a huge philanthropic impact, supporting a large number of charitable causes, not only financially, but using her own personal experiences. She bravely fought her health issues for many years. The family is devastated at her death and asks to be given privacy at this difficult time.

PHOTOS of the Rausing residence and investigation: 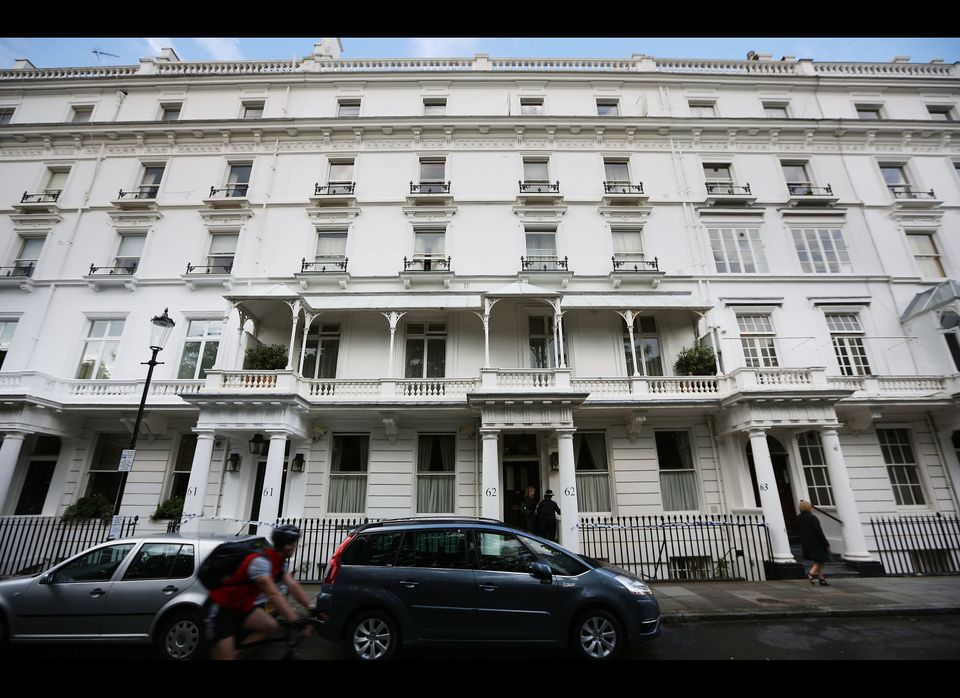 1 / 4
Tetra Pak Heir's Wife Eva Rausing Found Dead
LONDON, ENGLAND - JULY 10: Police tape lines the outside of the house of Eva Rausing in Knightsbridge on July 10, 2012 in London, England. It has been reported that the body of Mrs Rausing, the wife of Tetra Pak heir Hans Kristian Rausing, was found here yesterday. Police have said that a 40 year old man has been arrested in connection with her death and also on suspicion of possesion of drugs. (Photo by Peter Macdiarmid/Getty Images)
Getty