President Rouhani's government has been desperately trying to identify and recover billions of dollars entrusted to so-called 'sanctions busters', with the President himself calling this side of national efforts to circumvent sanctions nothing less than 'plunder'.

Just last month Golam-Ali Jafarzadeh, a member of parliament assigned to the committee investigating corruption, went further, saying 'some of our findings are so big and shocking that we are reluctant to bring them to open session in parliament...we're afraid if the extent of corrupt practices become public it could lead to social upheaval'.

The story became so big in Iran it even reached the English-language press. Meanwhile the Financial Times has described sanctions-evading oil deals of the sort that shot Babak Zanjani to international notoriety (and threatened to destabilize the Turkish government) as 'only the start of the corruption that thrived under Ahmadinejad'.

It is fuel to the fire of a divisive debate: what is the real impact of sanctions? For some, they brought Iran to the table, nothing less. For others, sanctions are a reckless gamble and blunt tool that threaten to destabilize the moderate faction (that world powers would prefer to deal with), and morally abhorrent to boot.

The reality is perhaps best explored along three dimensions:

i) the real impact of the sanctions and other trade measures on national income;
ii) the historical record of sanctions in influencing nuclear policy;
iii) and, finally, the effect of sanctions on the existing power structures in Iran, namely through distributional effects.

Economically, most accounts refer to the Rial to having lost some two-thirds of its value since the most severe round of sanctions in 2012, culminating in Iran's removal from the SWIFT international inter-bank network. 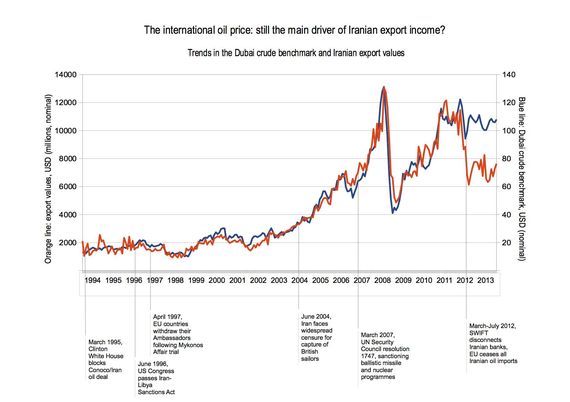 Given the limitations on data, moving beyond generic claims about currency movements can be tricky. But we can try. The graph above uses total export income (IMF; monthly total) -- of which some 70-80 percent has historically been petroleum exports -- set against the closest international crude oil benchmark, the Dubai price (World Bank; monthly mean).

This allows us to do three things.

First, we can determine what has been the main driver of Iranian export income. Is it sanctions? Or the international oil price? Sanctions episodes dating from 1995 have been labelled on the graph, to highlight any potential correlations. The data indicate an overwhelming correlation (0.98) between the international price of oil and Iranian export income, the lines moving virtually in tandem for most of the period.

Now someone could suggest that a third factor is in fact driving both variables, and that is not impossible, but given what we know about the importance of oil to Iranian exports, extrapolating a causal relationship makes sense.

Against the backdrop of this correlation then we can evaluate different sanctions episodes, each against the other. How, for instance, does Clinton's 1995 blocking of the Conoco deal compare with the impact of the 2012 measures? In short, it doesn't. None seem to. There is a vivid and precipitous collapse in income only with the cessation of EU imports and SWIFT disconnecting the country.

Finally, sufficient time has now passed that we can evaluate the mid-term effect of the 2012 sanctions. Using data only up to December 2013 means we avoid the period in which Iran has voluntarily -- as part of the November interim agreement -- capped exports, to capture only the effect of actual sanctions.

And whilst the two lines look like they may be moving with each other again later on, the actual correlation between the variables from March 2012 to December 2013 is only 0.17, and over the course of just 2013 even lower, at 0.11. In other words, whilst petroleum itself remains central to Iranian export income, other things, and not the international oil price, appear to be shaping the actual month-to-month value of exports.

There is a separate discussion to be had as to how reducing this source of revenue has impacted government coffers, and then influenced policy. But it seems reasonable, given the magnitude of the effect, and the qualitative effect of disconnecting Iran income from the international oil market (and prices) to think sanctions have played a fair part in recent Iranian geopolitical calculations.

Moving on to part two, the historical record, and things get spottier. Despite various efforts by the United States and other to impose sanctions and limits on the importation of nuclear fuel and technology, both India and Pakistan went nuclear.

South Africa attained 'nuclear devices', Israel revels in an unambiguous silence (with strong suspicions of a South African/Israeli joint-test near the Prince Edward Islands, 1979's 'Vela Incident'), and North Korea has declared itself a nuclear power several times over.

Looking at the South Africa case more closely, David Fig, writing in 1999's How Sanctions Work: Lessons from South Africa, asks how, in fact, a country under such pressure and isolation could have developed nuclear weapons at all.

Fig challenges the official 'indigenous' narrative, deciding there must have been more outside expertise and materiel then previously recognized. He concedes that sanctions were likely important in limiting production to a 'small number of rather crude devices', but argues that 30 grams of tritium, enough fuel for a happy dozen of atomic bombs, had still been imported from Israel.

This almost certainly occurred under the sanctions regime, as the trade appears to have concerned a second, later, stage of thermonuclear research. South Africa did have special advantages, not least being a major source of uranium, and as such heavily invested in by Britain and the U.S. But then Iran had access to Abdul Qadeer Khan's nuclear bazaar during its 1990s heyday.

So in terms of nuclear containment, sanctions alone do not have a great record. When countries both richer and poorer than Iran have made nuclear weapons a policy imperative, they have achieved it, despite outside efforts to stop them.

So it would seem wanton to think sanctions alone have changed Iranian calculations. But what about the extension of this argument: can sanctions effectively bring pressure to bear on the system as a whole, to achieve certain policy goals?

The Peterson Institute's Economic Sanctions Reconsidered examines cases of economic sanctions with political objectives going back to 1914. Of its 204 observations, 80 are counted as having either the de jure or de facto objective of 'regime change'.

Interestingly, it presages its findings with the caveat that sanctions often have had very little to do with foreign policy objectives, and rather been intended to 'assuage domestic constituencies.'

Either way, success -- sanctions making substantial contributions to achieving declared policy goals -- has not, historically, been abundant. The publication finds the rate for both sanctions efforts overall as well as those inside of a UN framework, is something like one in three.

Looking at how sanctions contributed to the ending of the Apartheid system in South Africa, Audie Klotz, also in How Sanctions Work, finds that 'international influence reached deep into the fabric of society, undermining the legitimacy of apartheid'. Censorship couldn't mask 'the deepening fissures within the white community' isolation was creating.

More to the point, there was a critical mass of opposition with which the international opprobrium of sanctions dovetailed: 'external pressures combined especially with domestic labor mobilization... to create dramatic political and economic change'. In other words, success depended on a deep, systemic and pre-existing majority opposition.

While there is a clear opposition bloc in Iran, the extent to which it is either anti-system and/or in the majority, are both open questions.

And so to the third question: is it clear that sanctions, given the various and sometimes complex distributional consequences that follow, are in fact weakening the regime the way champions of sanctions claim?

Whilst many commentators seem happy to use the value of the rial alone as a general proxy for the health of the Iranian economy, dramatic changes in currency values, not least in major oil economies, can imply complex distributional shifts that belie standard caricatures.

For the government, being at the centre of the country's oil and financial industries means also being the largest holder of foreign reserves. The net effect of the rial losing, say, 70 percent of its value is that the government's ability to pay down debt and other costs is almost doubled. And purchasing power means patronage.

Crucially, for the largest industrial producers, often part of or with links to major quasi-public organizations that report only to the Supreme Leader, there can be a double-win. Though potential export gains are lost, sanctions provide a captive market. And this opportunity can be augmented by access to cheaper foreign currency at official rather than market rates. Back to South Africa, Klotz finds that it was precisely those industrial sectors connected to 'military industrialization and...import substitution', that 'remained most insulated from... the cost of sanctions.'

On the individual level, those best inured from increased day-to-day living costs are those richer and those closet to the regime, again with access to preferential official exchange rates. The hardest hit are the poor and the salaried professional classes, who have almost certainly seen absolute drops in living standards for several years now.

Finally, there is the issue of political displacement. As noted above, judicial and governmental reports within Iran have identified billions of dollars in budgetary shortfalls under Ahmadinejad. And the rapid inflation of the last 5-10 years is almost certainly, at least in part, a form of Dutch disease: government mismanagement of the vastly increased energy revenue causing prices in tradable and non-tradable sectors to rise.

Externally imposed sanctions have effectively distracted from and provided political cover for gross corruption and incompetence. But worst of all, as can be seen from the case of Zanjani and others, sanctions enabled, if not demanded, such corruption.

So the net political effect is ambiguous at best.

However 'smart' policy-makers may claim sanctions are, they still represent a form of collective punishment. It directly reduces the potential income of the country as a whole, impacting millions of people who may not support their governments decisions at all. Certainly the SWIFT measure, taking all Iranian institutions out of the world's financial network, was not a very discerning one.

The above analysis, looking at sanctions along three different dimensions suggests that they are at least as compromised in policy terms as they are morally dubious.

The economic impact of the measures since 2012 is undeniable. It seems reasonable to ascribe to this impact some responsibility for current moves to detente. But the idea that sanctions have stopped a determined nuclear weapons programme runs totally counter to historical experience. And there is good reason to believe, as well as increasing evidence, that their distributional impact may be strengthening the position and advantage of the least democratic institutions in the country.

Whatever may come of this process, we can only hope that a blind faith in the power of economic sanctions is not one of them.