Back in July 2003, Evan Rachel Wood was one of nine young female stars chosen to appear on the now-infamous cover of Vanity Fair's Young Hollywood issue. That year, Wood rose to stardom with the teenage-rebellion film "Thirteen" and posed for Vanity Fair alongside the likes of Hilary Duff, Lindsay Lohan and the Olsen twins. 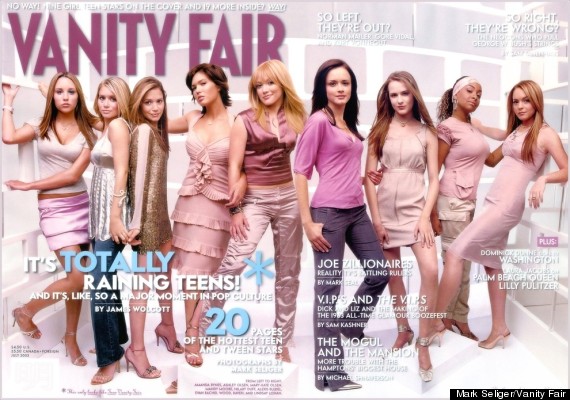 The experience, however, was apparently not an enjoyable one.

A Twitter user posted a photo of the cover image, shot by Mark Seliger, with the message, "NEVER FORGET." Wood responded with a series of tweets about the shoot.

I was almost in tears after this shoot. They tried that dress on me, I wasnt comfortable but they told me there was no time-- @katiexwright

-- cause everyone else took up too much time with their fittings. Then I was given a choice on whether I-- @katiexwright

--wanted to wear flats or heels. I chose flats and was immediately handed heels and told they looked better. Then we were-- @katiexwright

--all lined up, stared at and approved. I was 15 and felt for the first time my identity being erased and the pressure-- @katiexwright

-- to shut up and do what you are told. I felt like meat. Since then, I have found my voice. Never again. #neverforget @katiexwright

Side note , I have shot the cover of "vanity fair" since and had a much different experience. It was quite lovely. 😊

I begged for pants. “@YouWonScience: @katiexwright I'm surprised any of you were allowed to wear pants, ridiculous”

I think when you are young and inexperienced and shy you can be bullied more. I learned to say no. @rachelm97x

In 2003, Wood had never heard of Juicy Couture and while the rest of the group was debating over Britney Spears or Christina Aguilera she chose Alanis Morissette. During her Vanity Fair interview she said her pet peeve was “people that do things because they think they should be doing them."

Last year, Wood -- who has been acting since she was 9 years old -- stood up for scrutinized young stars who've grown up in the public eye.

“When you’re a teenager in an adult career, people expect you to be perfect and expect you to never make mistakes or to be a reckless teenager," she told the Daily Beast. "And then when you are, they give you such a really hard time for it. You have to remind them that you’re still a kid ... I was never a Bieber or a Cyrus, but I think the judgment was there, sure.”