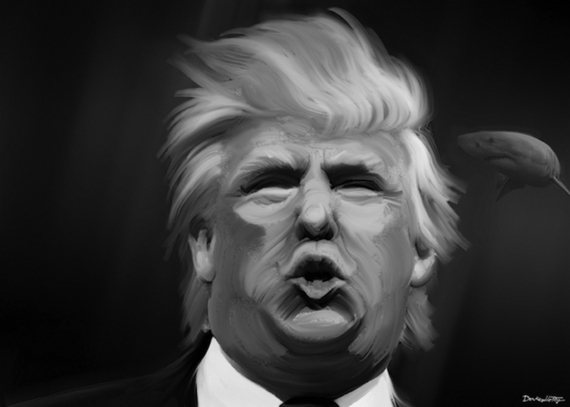 It certainly seems that some of the more intellectual evangelical leaders are not big fans, but it also seems that much of the evangelical populous, at least those that clearly identify as Republican, are.

This is the only way that Trump could be leading in the polls, even among evangelicals. It also explains his upcoming meeting with evangelical heavies (at least in the celebrity/prosperity gospel world). Finally, it would seem to be the reason behind his recent attempts to convince us that the Bible is his favorite book -- you know, without being able to list his favorite verse or distinguish between Old and New Testaments. "I'm not gonna get into it," he says, in classic Trump-dodge style.

Trump's rise in the early going of the GOP race has got me reflecting on how Christians like me ought to respond. I've written before about how I'm influenced by Wesleyan and anabaptist thought in lots of ways (in addition to charismatic/pentecostal thought) which kind of defines this messy middle place that I inhabit. I'm not conservative. I'm not a card-carrying progressive/liberal either. I'd rather find a way beyond these options entirely, like the "middle way" of the Wesleys and the "third way" of the anabaptists.

With the latter, though, there has been a clear history of eschewing national politics in favor of a an ecclesial kind of alternative. That is, anabaptists (and even neo-anabaptists, in a neo kind of way) have honed in on the problem of compromising with violent empire when Christians engage in national politics, and prefer to locate the center of good social action in the society or "polis" of the church. This is at the heart of their opposition to Christendom -- the unholy alliance, beginning with Constantine, between church and empire-politics. I have resonated with this greatly, especially in witnessing the way the religious right and moral majority of my youth (and the Fox News Christian conservatism of the present) has compromised the heart of the gospel for an exclusionary, greedy, warmongering, and often compassionless lust for political control. Further, I've also seen the way more progressive or liberal churches often simply become promoters of Democrat social ideals and agendas -- or "chaplains of empire" as Walter Brueggemann might say.

This anabaptist kind of impulse is essential in countering the easy capitulation to the culture of political expediency. It's essential to providing a prophetic witness against systemic war and greed, and the greed of war, and the war (on the poor) of greed.

But with Trump, it seems that conservative evangelicalism has officially jumped the shark. Or TRUMPED the shark, as the case may be. And it is forcing the issue of how we engage. Here, we have a man who literally embodies the greed of merciless and immoral corporate capitalism. Here, we have a man whose racism (especially in his hatred for undocumented immigrants) is not only overt, but seems entirely acceptable to both him and his passionate followers (some of whom now include card-carrying white supremacists). Here, we have a man whose mindless militarism and warmongering knows no bounds.

I could hardly believe my ears when Ann Coulter "opened" for Trump this week by laughing about the daily "drone show" that we could conceivably watch while visiting the "tourist attraction" of Trump's wall on the U.S.-Mexican border.

Conversely, I spent the majority of my life in a very politically independent state, Vermont, and have witnessed and experienced the impact that government relief and empowerment programs (enacted at the national and local political levels) have on those struggling under enormous economic and social burdens. In the Nineties - the Nineties! - Vermont signed universal healthcare for its children into law. This is only one example of the countless ways the state supports its immigrants, impoverished, homeless, hungry, undereducated, at-risk, women, children, etc.

Vermont was also the first state in the U.S. to legalize same-sex marriage through the legislative process.

And Vermont, of course, is the state that produced another presidential candidate in this current race: Bernie Sanders.

Taken together, can a Christian with a godly sense of compassion and commitment to peace and justice morally justify not speaking out against a candidate like Trump - and voting against him too? Likewise, can a Christian morally justify not supporting (and voting for) the programs that, in very real and on-the-ground ways, save the lives of the least of these in our midst? Have we succumbed to ideology, and perhaps cynicism, if our opposition to empire leads us to complete separation or at least non-participation in the very real political process that affects very real lives?

Wesley is perhaps helpful here. Instead of detachment from English politics, he sought to champion liberty and support the monarchy insofar as it acted justly. In a very chastened way, he even approved of preaching a little politics in the pulpit. He roundly opposed anarchy, and championed social relief, justice, and the common good, both at individual and collective/societal levels. Yes, he also opposed the American revolution (like a good English monarchist), but I digress.

I am becoming convinced more than ever that being a Christian in this messy middle means taking a Wesleyanabaptist approach to national (and local) politics. Namely, we must have it clear in mind that the church is, in true Hauerwasian fashion, a body politic entirely distinct from human empires. Its witness must first and foremost consist in shaping an alternative society, rooted and grounded in Christian conversion. To be the people of God means to live in a way other than the violent empires all around us. The King and his kingdom are of foremost concern - in the already expression of the worshiping church's salting and lighting the world, and the not yet of the fully restored reign of God in Jesus to come. This is where our ultimate hope lies; this is our ultimate "fight"; and placing our ultimate hope in political power is not only foolish but a dangerous pursuit for the Christian, and the thing that created the whole Christendom mess in the first place.

And, in true Wesleyan fashion, perhaps with a Brueggemannian twist, the church must become a prophetic witness to the empire, actively opposing its violences and racisms and injustices. As it receives and speaks "the word from elsewhere", it must impact the empire here and now. It must certainly do this through grass-roots means, but I believe it cannot neglect to do this by engaging with the political process, particularly through voting. I know that the question of holding political office is an especially difficult one considering the tacit endorsement of America's warring (and other wrongs) that it might entail. But to reject speaking out and voting on the basis of separation from empire (while taking part in most other functions of living in the empire) seems to me an ideological fail and a denial of our very real responsibility to love our neighbor.

We need not just common but kingdom grace in engaging with the political process in order to love our neighbor as we love ourselves, all while giving witness to the already and not yet kingdom of God that one may enter by bowing the knee to Jesus.

And by all means, we must give witness against this disastrous behavior from some of our brothers and sisters who insist on Trumping the shark.