They asked me to write about my daughter, Razan Zaitouneh. I am not a journalist or a writer but I will write what is on my mind. I will not talk about Razan's work or her achievements as so many others have done so already.

I will never forget those times at the start of the uprising in Syria when she faded out of the public eye in order to avoid arrest. She would only leave the house at night and while in disguise. Whenever I missed her I would try to meet her in secret. I advised her repeatedly to leave the country and travel abroad, as some of her friends had done. She would shake her head with a sad smile, and reply: "I will not leave my country." So I would return home saddened and desperately pray to God to save and protect her, waiting eagerly until I would get to see her again. I was shocked when she told me that she was planning to move to Eastern Ghouta to settle there, and when I asked her why she replied:

"Mother, it is a safe area... There I will live in safety and I will be able to move freely, and I will not be threatened by anyone."

Despite my pain and sorrow at her decision, which meant I would no longer be able to see her from that day onwards, I wanted her life to be stable and secure so I gave in to the decision for her own safety.

After she arrived there we would communicate through Skype -- she always tried to make me feel that she was comfortable, but my heart always told me the opposite. I would often tell her father about my fears, but as usual, she kept quiet to stop us from feeling worried.

When the siege on Eastern Ghouta intensified, and the people lacked bread or other food, I was constantly worried for her -- I would ask her if she had bread, if she had any food? She would reply: "Do not worry, dear." When I kept insisting she laughed and finally conceded: "What I would like are some sweets or chocolate. Neither me nor the children in the entire neighborhood have eaten any for a very long time."

The next day I went to the market quickly and bought her all kinds of chocolate -- I bought a lot because I knew she would not eat it by herself, and would distribute most of it to the others with her. I also bought her some medication because she was complaining about rashes on her hands. I also bought some medicine for her husband Wa'el because he had stomach pains, as well as a few other items requested by her friend Samira.

Of course, I bought all these items wishing and hoping to God that I would find someone who would be able to get these items to her. The area was under siege -- the roads are closed and there was no way in or out, but I was always promised that we would find a trusted person who could make it through.

The next morning, a year ago today, I woke up to hear the news of the kidnapping of my daughter along with her husband and two friends, Samira and Nazem.

I could not believe what I heard, I thought there had been some kind of mix-up, but unfortunately the news was true. I felt as if the world was closing in on me. I could not cry; my heart was weeping, but my eyes did not shed tears. I felt a terrible pain spreading through every part of my body. 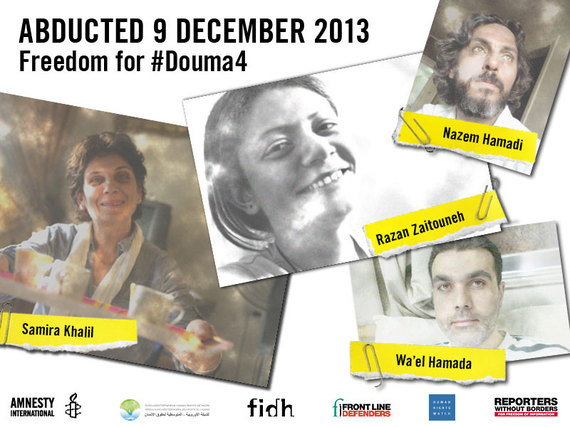 Days and months have passed while I waited in vain. Every night I go to sleep hoping to wake up to some good news, but so far to no avail. My hopes are evaporating and the bitter reality remains. I have lost my daughter in that liberated area where the Free Syrian Army was meant to be dispersed everywhere, where I had hoped she would be safe, because their mission is to protect civilians everywhere and at all times. And now I have no solution to my situation and no hope except my faith that God will return her to safety, along with her husband Wa'el and her friends Samira and Nazem.

May freedom come to them, along with freedom for all those who are missing, kidnapped or detained everywhere.

Munira al-Hamwi is the mother of Razan Zaitouneh, an award-winning Syrian human rights defender and writer, who was abducted along with her husband and two friends in Duma, on December 9, 2013. Duma is one of several towns in the Eastern Ghouta region, to the east of Damascus, in which armed opposition groups are present. Government forces tightened their siege of the area in July 2013. According to the United Nations, 150,000 people live in the area and last received food supplies in May 2014.

This blog was written with the support of Amnesty International, which is marking the anniversary of Razan's disappearance on Twitter -- in English and in Arabic.