This Monday, animal advocates released a shocking investigation showing widespread cruelty at what some would consider the most unlikely of places ― a top-rated Whole Foods turkey supplier.

Direct Action Everywhere (DxE), the organization that conducted the investigation, saw turkeys suffering from inflamed crops, swelling, open wounds, severe feather loss, and leg injuries. The birds trampled each other in the massive crowds. Feces covered the floor, up to six inches deep in some places.

Diestel Turkey Ranch, the target of the investigation, holds the highest animal welfare rating, Step 5+, given out by the Global Animal Partnership, a nonprofit organization that received over 90% of its funding from Whole Foods in 2014. As of 2013, only 3 of the 2156 suppliers in the program held this rating.

These issues and others appear to violate several of Whole Foods' own minimal standards, and that Whole Foods' advertising of Diestel is based on only one of their facilities, which doesn't actually raise any turkeys for commercial use. Investigators visited this "showcase" facility and others, noting stark differences between the locations. 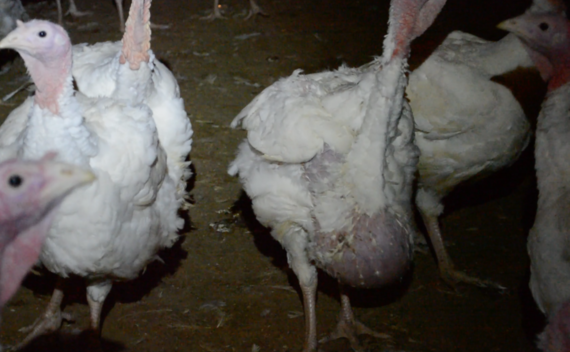 This investigation is only the most recent in years of findings from advocacy groups showing the rampant cruelty in animal agriculture. Just last month, a Mercy for Animals investigation showed workers punching, throwing, and pulling the heads off live chickens.

Two weeks ago, Compassion Over Killing released disturbing video of a slaughterhouse where workers mocked the suffering of the sore-covered pigs writhing in pain.

The accumulation of these appalling reports have made "factory farming" a dirty word for the American public. Even though 99% of animals raised for food come from factory farms, the abundance of footage from all sorts of facilities, including those considered humane, indicates a deeper issue with our food system that affects even the remaining 1%.

As Thanksgiving approaches, we need to confront the immense and inevitable cruelty of our food system. We can't properly give thanks, celebrating family and good fortune, with the stain of this vicious industry that runs directly against our American values of liberty and the pursuit of happiness for all.

We want to believe that we can just reform the current system to eliminate the suffering of farmed animals, but because these feeling individuals cannot mobilize and tell their stories without our help, they will never be able to protect themselves from behind closed doors. There will always be profit incentives for producers to cut corners, and the resources needed to monitor and enforce laws that give animals lives worth living are too immense to be realistic. Even the minimal standards we have now for slaughter, which don't apply to the birds who make up 95% of farmed animals, simply aren't being enforced.

As an activist who regularly speaks about the problems of animal agriculture, people sometimes try to ease my concern with statements like, "Oh, that's okay, I only eat humanely raised meat!" When I ask them about their actual purchasing behavior, they admit to only buying a small portion of animal products from sources that seem more ethical, and acknowledge that they haven't thoroughly investigated those facilities.

Even if they visited those farms, they'd face issues like those at Diestel, where a showcase farm paints a misleading picture of animal welfare to their customers.

The psychological refuge that "happy meat" provides is one of the greatest threats to the future of animal protection. Even if we think raising and slaughtering animals humanely is theoretically possible, we should still unilaterally oppose our current system of raising animals for food. 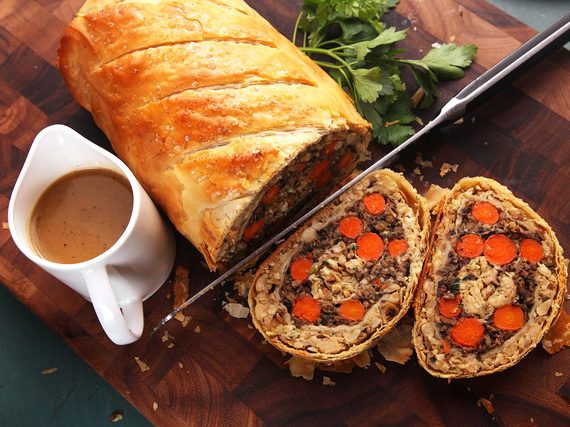 This holiday season, we need to give thanks to the abundance of healthy, tasty, and affordable plant-based options like store-bought roasts or home-made seitan. More than just changing our diets, we need to organize and speak out against this horrific industry. We need to move towards a system that better reflects our nation's conviction that everyone should have the opportunity to be safe, happy, and free.