Behind the Cover:
There is a tried and tested truth that reads: "You can't tell a book by its cover." Despite the inherent wisdom in that statement, there are times when many of us choose not to look beyond the cover in certain situations. I certainly have in the past, been guilty of forming opinions about a person or a situation without having all of the facts at my disposal. One of the factors that I believe contributes to this is our own inherent bias. We all have bias. To deny that is to deny a rich opportunity to learn from our human experience. Another factor is the fear and uncertainty that accompanies changing our perceptions. For many, change means letting go of the familiar, and that can be unsettling. In lieu of embracing the empowerment in change, we choose not to progress, even if it prohibits us from achieving a higher level of thought. Finally, choosing to see someone only through his or her diagnosis prevents us from understanding who that individual is or how he/she truly perceives the world.

Self-Fulfilling Prophecy:
I was employed in the human services field for 30 years. Twenty-seven of those were for the State of New York as an addiction counselor and clinical supervisor. A standard component of the training and education that I received was related specifically to differential diagnosis. The advantage of differential diagnosis (if done correctly) is that it can suggest an appropriate course of treatment. The disadvantage is that diagnostic labels can be self-fulfilling prophecies. So if individuals only see themselves as their diagnoses, they overlook their inherent gifts or strengths, while consciously or unconsciously manifesting the behaviors that support those diagnoses.

Reward and Challenge:
There are many challenges that are presented to human service professionals who work with chemically dependent individuals. The first is relapse, the return to uncontrolled drug use, which can occur at anytime during sobriety. Relapse does not begin when the person returns to drinking alcohol or their other drugs of choice. It may begin several months earlier, when they return to people, places and things associated with past drug use. Home environments characterized by family histories of: chemical dependency, mental illness, physical, emotional; sexual abuse, eating disorders, trauma due to catastrophic loss, and divorce present other challenges as well. Poor coping skills, trust / intimacy issues, low self-esteem and efficacy are additional challenges that must also be addressed during treatment. Though the challenges are many, the rewards of working with this population cannot be overlooked. During their periods of sobriety, chemically dependent individuals make a difference in the lives of others who desire to embrace sobriety, through support and by sharing their stories. It is true, that many chemically dependent individuals who danced with sobriety also returned to the world of addiction. What is also true is that many chemically dependent individuals have permanently embraced drug-free lifestyles.

Helpful Strategies:
Here are some of the things I have found to be essential in working effectively with chemically dependent individuals:

• Establishing rapport by creating a safe, non-judgmental environment.
• Disclosing the specifics of my therapist role and consistency with agency expectations regarding appropriate behavior in the treatment setting.
• Establishing myself as a listener first; bearing witness to their stories. This facilitated a thorough understanding of the individual's challenges in their words and helped me collaborate with him/her in developing an individualized treatment plan.
•Assessing for suicide risk during the initial contact. Chemically dependent individuals present for treatment because they are in crisis. If they see no solution to their problems, attempting suicide may become a viable option.
• Initially assessing for homicide risk as well. I have gotten affirmative responses mostly from those individuals with a history of command auditory hallucinations. These hallucinations occur when they hear voices instructing them to kill others and perhaps themselves as well.
• Respecting the individual's right to self -determine their treatment, providing that their actions do not put themselves or others in danger.
• Helping the individual view relapse not as a failure, but as an opportunity to enhance their future recovery efforts.
• Encouraging creative expression to develop insight and clarity. Some individuals prefer to journal; others will use music, art, or poetry.
• Teaching necessary social skills to help them utilize self- help groups. Their ability to master these skills will maximize their chances for long-term sobriety.
• Treating addiction and co-existing depression or other mental health challenges, simultaneously.

Destigmatizing Addiction
The recent death of Robin Williams encouraged constructive dialogue about suicide, mental illness and chemical dependency throughout the world. His vast talents as a comedian and an actor, and the gift of who he was as a father, husband and a friend have also been widely acknowledged. Worldwide, we have lamented that chemical dependency and mental illness robbed us of someone who was undoubtedly one of the universe's greatest creations.

Chemical dependency is an equal-opportunity disease. It does not discriminate as to the types and socioeconomic status of those individuals and families it chooses to touch. Many individuals I have worked with have verbalized being burdened because they are viewed by others as simply being an addicted person. They are, in reality, creative, loving, intelligent and passionate individuals who when sober have done meaningful things to make the world a better place. They are more than their addiction; they are light and love. 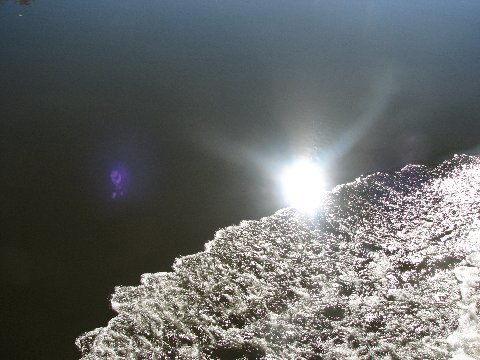 Photo taken by Gina Ashmore and used with permission


What I now hope for is that how the world honored Robin Williams is how all individuals who have faced similar challenges are honored. If we can all commit to this course of action, we may in fact, discover that every single life does have value.