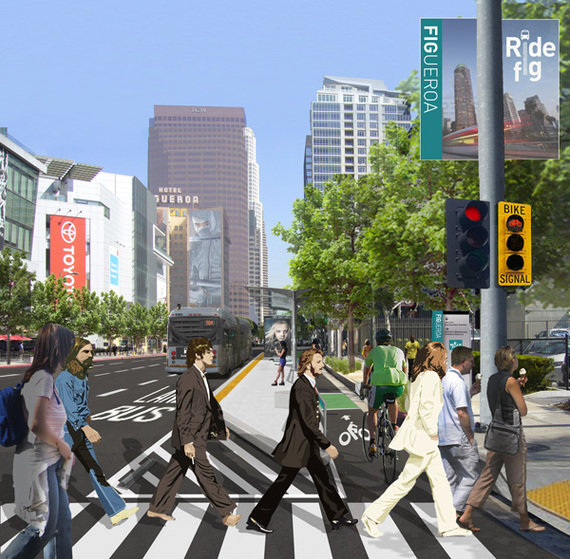 Recently Mayor Eric Garcetti's office hosted a City Hall talk by a transportation rock star. Gabe Klein, former transit czar for Chicago and Washington DC, spoke to LA's rail boosters and bike-eratti about how he created hugely successful bike-share programs in both cities. Perhaps his biggest message is that there is one universal mode of transportation in all cities: walking!

"We should be planning for the pedestrian first, then the transit user, the auto user and the bike user," he said. And the sooner we upgrade our streets to serve them -- serve us -- the more safely and efficiently we will all get around.

Los Angeles is pushing several essential plans to do this. The most important is the My Figueroa Project in Downtown LA. It will transform the Figueroa Corridor from a "freeway street" into a "complete" street -- from Staples Center to USC.

My Figueroa improves signals and signage, installs boarding platforms for bus riders, and adds trees, art and "street furniture" to make the pedestrian experience smooth and enjoyable. Most dramatically, My Figueroa creates a three-mile bikeway: a big and bold link between Downtown and South Los Angeles.

These are not ordinary bike lanes. They include cycle tracks separated from traffic. The first in the city. They decrease collisions and improve safety for walkers, bikers, drivers.

"It's an ambitious, holistic solution, and a unique one for LA," says Melani Smith, My Figueroa design-team leader and partner at Meléndrez. "But it's not unique in the United States, and this is absolutely the right time and place to begin transforming LA's streets."

My Figueroa plays off the exciting rebound of Downtown. USC has 15,000 bikes on campus with many students commuting from Downtown. LA LIVE is a people magnet that continues to grow with or without Farmers Field. Expo Rail has funneled a new wave of pedestrians here. The planned Downtown Streetcar will add another link. And several huge, new developments will require as much alternative transportation as possible.

"So we need a high-quality bike/pedestrian/auto/transit connection that encourages the broadest range of users," says Smith.

But My Figueroa has hit a road block. A business group including auto dealers at the south end of the Corridor is concerned that eliminating some traffic lanes will stifle access. The group is joined by Ninth District City Councilman Curren D. Price Jr.

One should be sympathetic to business concerns, but My Figueroa will actually be good for them. A similar project in Long Beach resulted in the highest retail sales in 10 years. And a New York Department of Transportation study called Measuring the Streets shows how "complete-streets" projects boost business, rents and sales tax by making streets safer and more efficient, and creating welcome public spaces.

LA is at a crossroads symbolized by My Figueroa: Will our streets continue to be ruled by cars -- with the danger, delays and dismal livability that come with that -- or will they serve the 100 percent of us who walk?

One direction is the past. The other is the future.