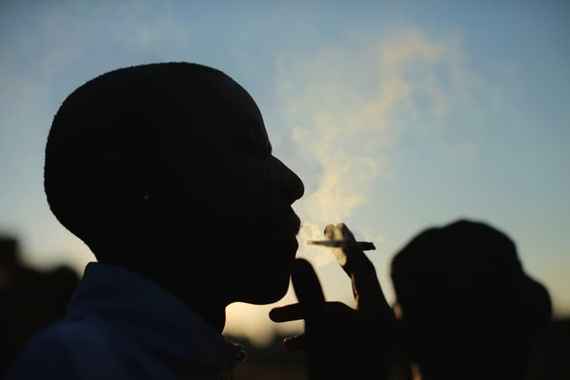 The incentive-reward mechanism helps us get through the day. You stop slapping the snooze button on your alarm because you'd rather not get glares from your boss for being late. You slog through a workout because health. You enter the Hamilton lottery in hopes that today is the day your stubbornness will pay off. But motivation can be a delicate thing. New research seems to indicate that smoking weed can dull reward systems over time, slowing the roll of a critical feedback loop.

A study published Wednesday in JAMA Psychiatry suggests that potheads seem a bit slow on the uptake for a reason: They've ceased to want. Researchers followed 108 mostly male participants in their early 20s ("the prime age for marijuana use") and hooked up to an fMRI three times over a four year period. The participants were asked to play a pretty simple game: Clicking a button when a target appears on a screen. If they got the target, they could win either 20 cents or five bucks; they could also lose that amount, too.

What the researchers were focusing most heavily on in the scans was the nucleus accumbens, which neuroscientists figure is where reward activities take place. In particular, they were watching the moment of anticipation right before the marijuana smoker was about to either win or lose; chemically, a surge of excitement translated to a burst of dopamine, the infamous "pleasure" shot that infuses a human with warm and fuzzy feelings when they win something or feel happy. The science on dopamine is pretty clear: The more it floods your brain, the more Pavlovian you tend to be in repeating a behavior so you can get that same shot of giddiness.

But, oddly, marijuana users were sort of immune to the standard ways of psychological brain chemistry. The more they smoked, the less their nucleus accumbens fired up with dopamine. In other words, the more pot, the less they were excited by small rewards, and the more pot it seemed to require to get that same sense of ecstasy.

This study -- like many others looking at the still-mysterious effects of drugs on our noggins -- isn't exactly criticism-proof. Testing at three different times in four years might not be completely reflective of a regular pot smoker's brain activity, and it might be a bit much to imply that pot is a "gateway drug" to harder stuff; plenty of people are simply recreational marijuana smokers and stop at that. For being around as long as it has, pot is still a very confusing drug when it comes to how it affects the brain.

Still, it's worth noting these effects, particularly as pot becomes increasingly legalized and therefore more accessible to the average American. Studies have proven that marijuana has addictive properties and this study seems to demonstrate that it affects the brain. It also provides some insight into stoner thinking. Regular smokers who say they become less anxious when they toke up may be observing a breakage in the incentive-reward mechanism.

At the end of the day, smoking pot might not be as dangerous as, say, snorting cocaine. But there's reason to believe that limiting consumption is a good idea. It could spell the difference between getting that little spike of pleasure from finding a $5 bill on the street or walking straight past it.

MORE FROM INVERSE:
Vaping Marijuana Is Healthier Than Smoking It
Why Scientists Are Tickling Lab Rats
The Top 5 Wildlife Livestreams for People Stuck Indoors this Summer
The 8 Best Proxy Sites for Surfing the Web Anonymously
Cover Your iPhone Camera With More Than Tape