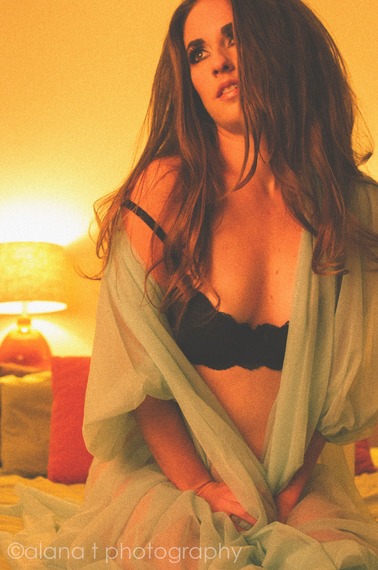 It's not everyday that I open up my Facebook and see a boudoir shoot but to my surprise, there was my friend Eden Marsicek wearing little more than a bra and smile. I was in a coffee shop when the unexpected semi-nude appeared on my screen, so I looked around me to make sure no one was looking, which, admittedly, was a little foolish, considering there was a Victoria's Secret winter catalog two tables away. But thanks to the schizophrenia that is America's disposition towards sex and women's bodies, I felt ashamed and wanted to hide what I was looking at.

Alana Tamminga is responsible for the pictures of Eden ending up on Facebook feed. Alana is a photographer and activist based out of Tacoma, WA who is actively working to subvert the shame culture that surrounds women and their bodies. The boudoir shoot Eden and four other women modeled for is part of Alana's larger project called "Women: Raw. Honest. Loved." In her words, the project is an attempt to "stop this junior high school behavior and have a night [of photography and dialogue] where we discuss these insecurities (that we tend to internalize and, in turn, take out on others) with other women." She told me that she wants to encourage women to have relationships with themselves and one other that create, "a mutual respect for our female peers, uniting and building one another up instead of disparaging and tearing each other down.

The women in this shoot ranged from ages 26 to mid-50s. Eden was the youngest in the group and, as she pointed out to me, the only one who hadn't given birth. When I asked her if she was a part of the shoot to impress "the boys," she just laughed at me, stumbling for the proper witty response before settling on a simple "no." "That's the problem with guys," she told me. "They always assume you're doing it for them, that sex is for them. I did the shoot because I wanted to celebrate my body. I love shooting with Alana because the photos she takes of me really do make me feel quite beautiful. It validates a part of me that I don't always feel confident about."

Men and women, but especially men, love to mistake sexiness for sex. I know I do at least. When a woman celebrates her sexiness the assumption often made is that she "wants it" because really, what other reason might a woman have for wanting to look good? From my teens on I've known that hot girls know they are hot. It's hard for me to imagine that something that is so obvious to the rest of us could be foreign to them. This, of course, is not the case. Eden shared with me that it wasn't until recently that she began to understand and appreciate the beauty she possesses. "Maybe this should be embarrassing," she told me, "but it wasn't until the last couple years that I've learned that if I wear my hair a certain way or dress in a certain way that I'll attract a different kind of attention. It's attention, to be honest, that I don't always want and wish would go away. I see men staring at me and just wish that they wouldn't, but then I think to myself that there's nothing that I can about it so I've learned to deal with it."

This is a reality Rachel Ervin has dealt with her entire life as well. She writes on her blog that, "when I was 10 years old, I began to sprout my own pair of beauties. They grew exponentially over the next few years and I was taunted relentlessly through middle school. I was called 'slut' and 'whore' before I could even tell you what the mechanisms of sex were." Her body, like so many women's bodies, has been a battleground throughout her life. As a teen and twenty-something, she was too sexy. Her breasts were, as she describes them, "porn-worthy" and drew attention whether she wanted it or not. She has dealt with sexism from men who saw her as something to conquer and from women who, for whatever reason, took exception to Rachel's outward appearance. Now as a mother of two, she deals with a new kind of objectification and sexism. Her post-baby body is no longer the body it used to be and she now must deal daily with advertisements and messages from society that remind her how unsexy she truly is. 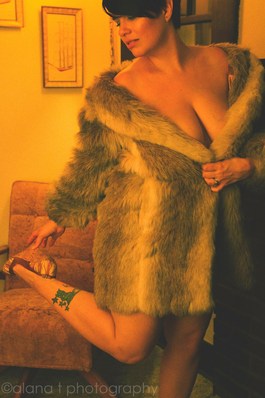 The boudoir shoot with Alana allowed her the space to vent and an opportunity to see herself in a new light. "Here," she reflected, "was a group of women who were cheering each other on. We shared and discussed our insecurities. We laughed at our doubts and reveled in one another's beauty. The shoot, as cliché it sounds, became empowering. Once I finally saw the photos, I saw another side of myself. They helped me believe other people when they tell me that I'm beautiful."

In a culture that prefers women to be pretty, make babies and use their breasts to sell cars, the boudoir shoot stands out as an affront towards these stereotypes. It challenges the notion that women can and should be boxed into a singular role. For the women who choose to do this, though, we continue to reserve language like "whore" or "slut" because at our very core, we are a society that quakes when women are strong and proud. We see empowered women who are confident in their bodies as a pariah that will somehow undermine the ideal society we have worked so hard to build, as though the status quo sexuality we experience today is a solid, working model. It's not. It's a system that allows men to objectify women and see them only for sexual utility, while simultaneously encouraging women to defame and belittle one another in some of the most psychologically vicious ways possible.

Women like Alana, Eden and Rachel are taking a proactive approach towards removing us from the rut we seem so intent on staying in. They are reclaiming their bodies and proudly celebrating not just the sexuality that they possess but the bodies that allow them to live and breath, to produce and cultivate, to examine and love, and yes, to be sexy and to be sexual.

Environmentalist and Activist. Wayfarer. Finding joy in the Pacific Northwest