My 3rd grade teacher knew. She was convinced. I wasn't so sure. I just spoke from my heart, little did I know that by doing so I was becoming a writer. She had assigned us all a Thanksgiving theme. The other kids sighed in dread but I beamed with delight. I loved writing. She asked that our theme be about the upcoming holiday of thanks. She insisted there must be a moral to the story. I felt good about my piece but never expected it to become so loved. My teacher was overjoyed and told my father who was an editor for our local paper that I was destined to be a writer. He smiled with pride as he read my piece. I had no idea that the moral of my story would come to life when I became a parent. My 44-year-old brain will now recall the theme I wrote to the best of my ability.

Me in grade school 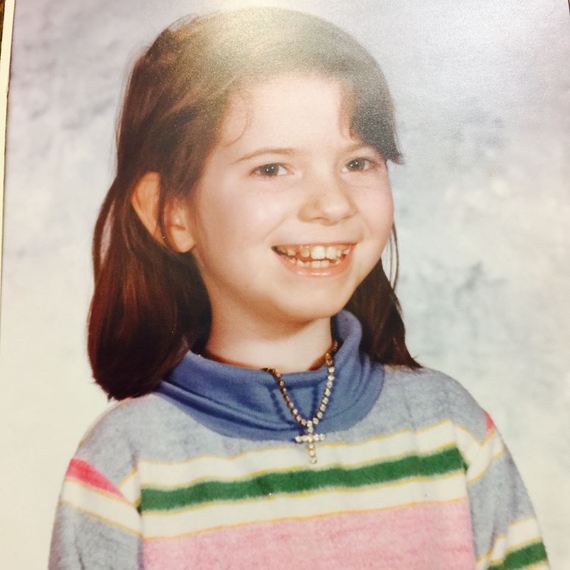 The Tale of the Thanksgiving Dog

Scruffy the dog always enjoyed the families' leftovers at his place under the dining room table. He was a loved dog who never wanted for anything. One Thanksgiving that all changed and Scruffy and his families lives changed forever. Little Suzie loved Scruffy so. She worried that one cold Thanksgiving when family was arriving out of town for the feast that Scruffy would be pushed aside. Her mother told Suzie that with all of the relatives coming and the small size of their home that there wouldn't be room for Scruffy under the table. She told Suzie it would be this one meal and that he would be given leftovers on the porch. Suzie felt dread in her heart for Scruffy. The family arrived and Scruffy was sent to the porch. As they began their delicious meal Scruffy bounded from the back porch and tore into the dining room, jumped on the table and ate the Thanksgiving turkey. Everyone screamed and the family was in shock. This was unlike their beloved pet. They didn't know what to do. That next Thanksgiving they chained Scruffy outside in hopes of saving their turkey. Scruffy broke free of the chain and ran inside and tore through their turkey once again. This continued year after year. Scruffy got fatter and fatter and the family got smaller and smaller. Thanksgiving came again and the family had a meeting about what to do about Scruffy. They thought maybe it was time to give Scruffy away. Suzie yelled and interrupted the meeting. She begged them not to get rid of her pet. She yelled that Scruffy felt left out. She said every other day he ate quietly under their table with no issue. She explained that on Thanksgiving they banished him as I he didn't belong and he did! She exclaimed "No one wants to feel left out. Everyone deserves a seat at the table." She begged them to find room for Scruffy under the table and she promised he wouldn't eat the turkey. As a last ditch effort to save Scruffy and Thanksgiving the family agreed. To their surprise Suzie was right! Scruffy ate his leftovers under the table quietly and never touched their turkey. He felt accepted again and Thanksgiving was back to normal. The moral of the story is everyone wants to feel accepted and everyone deserves a seat at the table.

My 12-year-old child came out to me 5 years ago just 2 months before Thanksgiving. He would feel like Scruffy did that very first Thanksgiving. When a child comes out as transgender the child doesn't just transition the whole family does. He worried family members would call him "she" instead of the correct pronoun of "he" or that they would call him by his assigned birth name instead of his chosen name of Chris. My family tried but that Thanksgiving was awkward at best. There were many slip ups and with every one I saw my son flinch. My heart sank for him but I also knew my family was trying but they needed time to adjust as well. They loved Chris and in time things improved.

This past Thanksgiving was 4 years after his transition and time had brought about much needed acceptance for my son. As we drove home he said "Mom that was the best Thanksgiving. Everyone called me 'he' and used my correct name and I think they all finally accept me as a boy." His flinches of the past were replaced with smiles and my heart in turn sang in delight. He was given a permanent seat at the table. 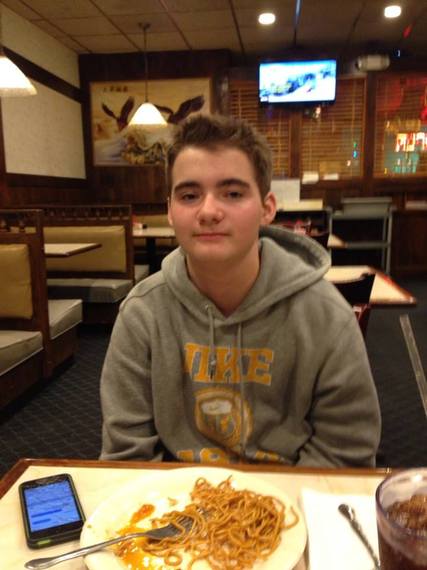 After another Transgender Day of Remembrance, and with Thanksgiving on its way, I hope for all of the kids who have come out as transgender that their families can also find a seat at the table for them. Acceptance may not come easy but if you can hold on to the love you feel in time you too will get there. It's important that parents of transgender kids know that they are not alone. I am the senior moderator of a closed Facebook group for parents and direct caregivers of children who are transgender. We have over 2700 members worldwide. We are a very tight knit group who will offer much love and will always have a virtual seat at the table for those in need.

As I enjoy another great Thanksgiving with my son and family, I hope in someway that the moral of the "Thanksgiving Dog" gives some transgender youth a seat at the table. If I can give the gift of acceptance to anyone out there then I will agree with my 3rd grade teacher and call my writing career a success. On this joyous time of giving thanks I am thankful for this opportunity to help others and in turn I say thank you to you all.

Mary J. Moss
Feisty single mom to a terrific 17-year-old boy who just happens to be transgender
Email me at: transparentmary@gmail.com
Tweet me at: @MsMaryMoss