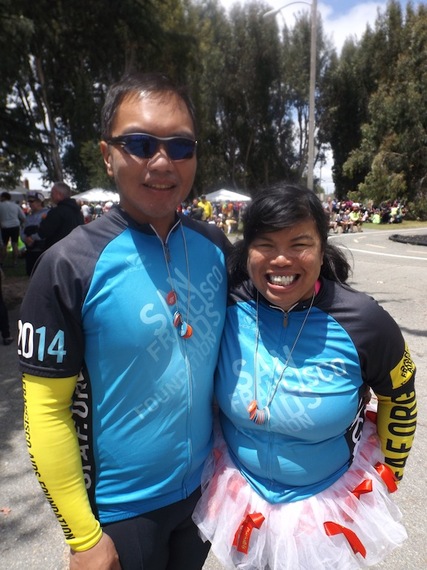 At one of the lunch stops during AIDS/LifeCycle (ALC), I saw a woman eating her lunch, by herself. She just looked so sweet and she was wearing a tutu, so I could only assume that she would be fun, and willing to talk with me. I immediately and naively went over and asked if she was a first time rider. "Actually no, this is my 13th ride," she said. Edna Flores-Lagunte had just blown my initial observations out of the water. I quickly asked what her story was, and what she told me, truly amazed me even more. Edna, who is of Filipino descent, originally rode to raise awareness within the Filipino community. "It all started more as an educational campaign to make people in my community more aware of HIV," she said. "It's become something I look forward to each year, and now I ride for friends who I have met along the way."

This year, Edna is riding for her friend Alain, who she said had always wanted to ride an ALC with her, but sadly, passed away this past February. Joining her this year was her seven-time ALC veteran rider husband, Richard Lagunte. It's stories like Edna's that are what makes this ride so incredibly special. During the first day of the ride, I was approached by someone who questioned the people who participated in ALC. "Isn't it just about all the popular gay men coming together and asking for money," he questioned? He at least did give credit to those "popular gay men" for raising money for a good cause. Needless to say, the conversation kind of annoyed me.

AIDS/LifeCycle is a combination of many people, each who have their own reason and story, equally as important as the other. And yes, ALC does have a lot of "popular gays," but honestly, those gays are the ones who alongside everyone else are raising millions of dollars year after year. This year, over $15 million dollars were raised, breaking last year's record. People like Oklahoma-based United Methodist Pastor Andy James and his wife Christy, who raised over $7,000 in honor of an old high school friend who passed from AIDS. Or Robert Gamboa, a Latino, Catholic, who rides in memory of his twin brother who was so ashamed of his HIV status that he never told anyone up until weeks before his death. Robert almost lost his battle to substance abuse and his HIV status until his twin convinced him to save himself. Robert rides to eliminate the shame that surrounds an HIV status. 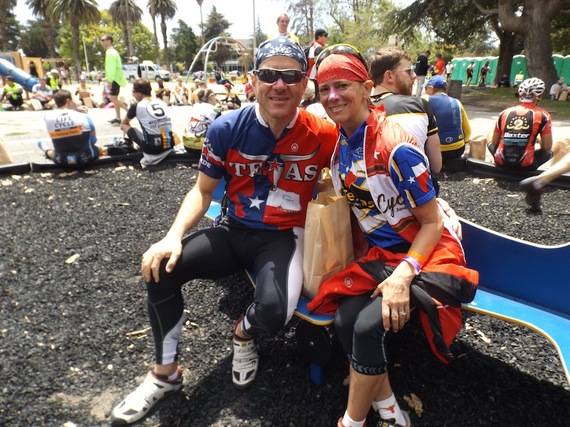 Then there is Leslie Hardy Hood, a black female physician who rides to raise awareness of the increasing prevalence of HIV among Black women. She is aware that not all the faces of HIV/AIDS are properly represented at times, and hopes to change that.

And then there is Carlos Guzman, who rides in memory of his mother who passed due to AIDS complications in 2001. She contracted the virus through blood transfusions made necessary by complications during his birth. He spent 12 years never discussing the reality surrounding his mother's death up until recently, when he came to grips with his own internal shame. Carlos is riding this year with a team he created. The team is made up of his co-workers, proving that he is no longer ashamed about discussing his past. 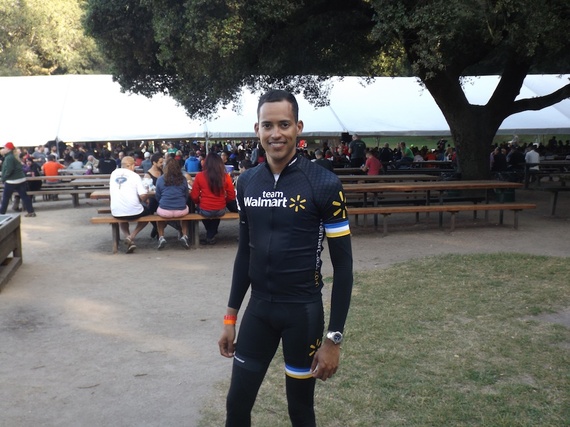 These are just a few examples of why people choose to cycle the 545-mile journey from San Francisco to Los Angeles. I bet if I had walked up to any other person today and asked what their story was, it would have inspired me enough to include them within this article as well. We are all here for a reason, and we are all here to raise awareness and end this atrocious disease. Whether we are popular or not so popular, we are all here, doing what we can.

AIDS/LifeCycle is a fully supported, seven-day bike ride from San Francisco to Los Angeles. It's a life-changing ride-not a race- through some of California's most beautiful countryside. AIDS/LifeCycle is co-produced by the Los Angeles LGBT Center and the San Francisco AIDS Foundation and is designed to advance their shared mission to reduce new HIV infections and improve the quality of life for people living with HIV/AIDS. This year, over 3,000 participants made up of cyclists and volunteer "rodies."

For more information on AIDS/LifeCycle, or to pre-register at a discounted rate, click here, and use discount code FABDUO.