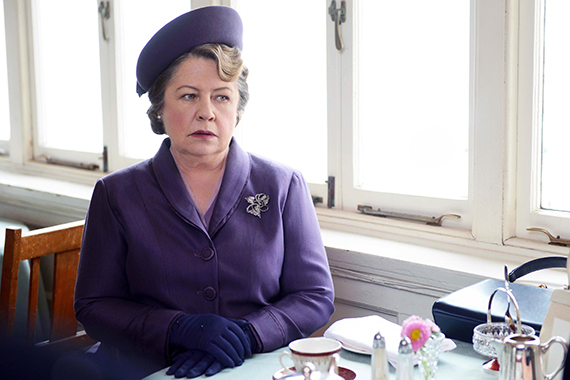 I'm not keeping track, of course, but I have to tell you, this Q&A is among my favorites so far. After chatting with Noni Hazlehurst for forty-five minutes a couple of months ago (I waited to post this interview until APTCH Season 2 was about to air on my local PBS station), I found myself wondering: how has this outspoken, opinionated, charismatic, compelling, interesting, engaging, fabulous and funny woman stayed off my radar for so long? Especially considering her status in Australia as something of a legend. Nonetheless, fear not, Noni Hazlehurst is here now, and we had a fantastic chat, for which I'm so grateful!

If you haven't already watched the Australian 1950s post-war drama in which Noni stars, A Place to Come Home (APTCH), the time to start is now. The Wall Street Journal recently included APTCH in its list of "The Best Television of 2015"--a very short list and a well-deserved honor!

To find out more about the story of APTCH and its on-again-off-again, canceled-then-revived history on Australian and now U.S. TV, check out my interview with Marta Dusseldorp, another of the show's stars (and another fabulous person), who plays Sarah Adams.

APTCH is showing on some PBS stations in the U.S.; if you're in Seattle, like me, you can watch Season 2 currently airing on KCTS 9.

Now, a warning. There's always a challenge in doing interviews: I don't want to do the interview without having done my research; at the same time, I know not all readers will come to the article with all the same information that I had. Noni (pronounced KNOW-knee, if you're wondering) and I don't get into too many spoilers below, but we do discuss her character's state of being and state of mind up to the end of Season 2, which does include allusions to what happened through the series so far. If that's more spoilers than you like, hasten thee quickly to get caught up before reading on! You can get the DVDs from Amazon (Season 1, Season 2) or stream online at Acorn TV.

Noni and I talked over the phone, which wasn't without its mishaps. The 8000 miles between Seattle and Sydney created a lag of a few seconds. This led to some awkward overlap, which I've tried to clean up.

Noni was an absolute delight to talk to. Now, on to the Q&A! 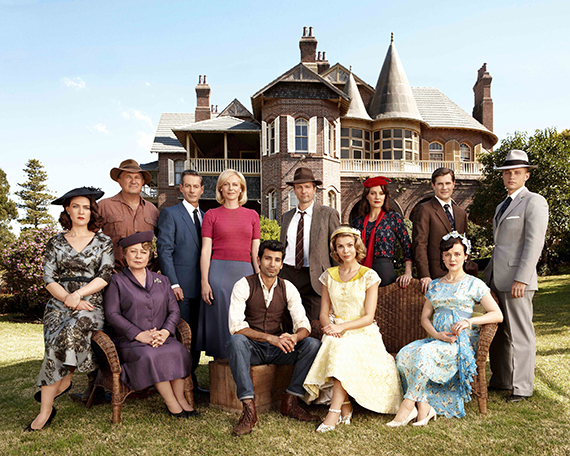 The cast of A Place to Call Home. Photo: Acorn TV.

Pam Stucky: How did you come to be a part of A Place to Call Home? How did you get connected with the show?

Noni Hazlehurst: It was a pretty conventional casting process. I did a screen test and was the first one to be cast. I screen tested with a couple of potential Sarahs [Sarah Adams, the other female lead, played by Marta Dusseldorp], and my vote was for Marta, and luckily they agreed and she won that role. I guess the difference was that normally I wouldn't screen test for a series in Australia because I've sort of done enough that people know what I do. But I liked the script so much that I was happy to do it. So, you know, there's always an exception.

PS: Did they contact you, or had you heard about the script and expressed your interest? How did you find out about it?

NH: I was invited to screen test.

PS: The character you portray, Elizabeth [Bligh], I don't want to call her a "villain," really, but she's complex, obviously. I'm a writer myself, and I always think that when you're writing a "villain," you have to think of everyone as the protagonist of their own story. You can't write someone as an evil person. And I'm imagining that as a performer you have to get your head into your character's mind as well, so you're not really playing a villain, either. I'm wondering if you agree with that, and how do you think Elizabeth Bligh sees herself?

NH: I totally agree with that. No one is all one thing. And we are far too judgmental in our lives, of ourselves and others. I get very frustrated when people say, "Elizabeth is such a bitch." I mean, from Elizabeth's point of view, she married at seventeen to a man who turned out to be gay, who was also a wealthy landowner in the district, you know, and we're talking just post-Victorian times. She made a pact with the guy, you know, she honored her marriage, she honored his status, she honored him as a husband, and they had a loving relationship, albeit a very distant one.

But she's very much a victim of her time, in that ... I have English parentage, so I understand that the English are masters at putting up a front. Particularly in those days, you know. They never spoke about anything personal. It was very much several layers of onions to protect whatever person they might have been. In fact, there was very little credence given to any idea of an "inner person." It was all about how you appeared in the world. And so her whole life has been dedicated to appearing in the world, her small world, albeit a small world, appearing in the world as someone in the upper echelon of that world. Someone who's an upholder of values and standards, and who is to be seen as a model of behavior. She's the queen of her own little domain, and so she will do anything to protect that. She's a very protective lioness of her cubs. In that small environment, it's become too inward-looking, as in any kind of upper crust aristocratic class, you know, they're very inward-looking. They don't let people in easily, if at all.

So, I totally understand why she behaves the way she does, but the interesting thing is that by the end of Season 2, she's lost her place. You know, her family don't want her there, the consequences of her actions, albeit with good intentions, have been devastating for her beloved son. And so she's at a point where she has to completely redefine herself. And I thank the writers that at least they've given her the intelligence to understand that she has to change, and not hold fast to this person she thought she was, because that person is irrelevant, in a sense. So it's quite an interesting journey to play.

PS: You've filmed Season 3 already, or you're in the middle of Season 3?

NH: The third series is currently airing. We start shooting Season 4 in mid-February.

NH: Oh, absolutely. Well, what I would hope for her is that she's able to embrace the times. You know, it's a really interesting period in Australia because we were shifting from our traditional view of England being "home," and because of the advent of television and movies and so on, reaching greater and greater heights coming from Hollywood. Our culture started to turn towards America, and rock 'n' roll, and all those things that drove the older generations crazy, and felt that the end of the world was coming. Given her daughter, who's very avant garde, and given the fact that she has no alternative but to look around her and see, now, what is her place in the world going to be, I hope that she can grow and evolve in a way that's positive. And I know that she wants to be of service. She's very much of that kind of environmental upbringing, that you had several roles to play in the community. So she needs to find her place. 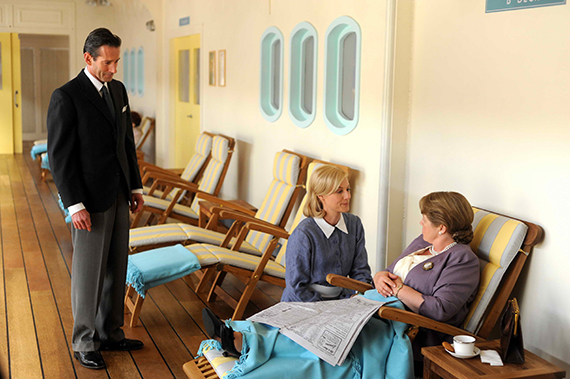 PS: She's such a complex character, which I think is fascinating, and you've played her with great nuance.

PS: And she clearly has that deep, caring love for Jack, and at the same time the very strong, you know, I've read that you were saying the story of A Place to Call Home is about bigotry and intolerance, and she sort of personifies that in some ways. Is that difficult to balance that portrayal?

NH: No. Because I don't judge ... she only had the information that was available to her according to the times and her upbringing, and she's had a very protected life. You know, we had a "White Australia policy" in the fifties. And our recently deposed, and deservedly so, Prime Minister, has been stalking the world stage talking about "we can't change Europe by letting in brown people," effectively is what he's saying. There are deeply, deeply racist undercurrents in Australia, as in the United States, as in pretty much everywhere in the white western world.

So I understand. And we deliberately try to show how bigoted people were, hopefully as a talking point, that people can say, "Oh, well, we've come a long way, baby ... or not." You know, same with the role of women, same with the role of the indigenous people, which is a theme that will emerge later in the series. And obviously the homosexual theme, that's so strong and has caused a lot of people to go, "Wow, I didn't realize so recently that it was so bad." You know, we don't learn our history anymore. So if you do it through a vicarious medium like television, you have a responsibility to be accurate. So I don't worry about representing someone like that because I want to be true to who the people were then, to make it interesting.

PS: I always believe that we all think we're doing the best that we can with what we have, so you have to come from that place.

Wait! There's so much more Q&A! What advice would Noni give Elizabeth? What can we expect from Elizabeth in upcoming episodes? Why does Noni think APTCH made the leap from Australia to U.S. TVs? Who changed her life, and how? All this and so much more is covered in the rest of the interview with Noni here!

As for Facebook, Noni mentioned the A Place to Call Home North America Fans page, run by Susan Cohen. The show also has an Official APTCH page.