Traveling long-distance from suburban Minnesota, my mother's words halted my mindless pacing -- a nervous habit that consumed me during familial phone calls.

"Did your brother tell you?" she asked.

My older brother and I called each other twice a year: his birthday and mine. Our conversations were well-intentioned, but stilted and brief. Whatever my mother was about to say, it was safe to assume that, no, my brother hadn't told me.

Mom continued, her voice flushed with excitement: "He's finally coming to visit you in New York!"

With my feet firmly planted on the parquet floor of my Brooklyn apartment, I could hear the thump-thump-thump of my heartbeat as it flooded my ears. I had been living in New York for three years; I assumed I could go another three hundred without ever having to put out a guest towel, blow up an air mattress, or play tour guide for my brother. What would we talk about, staying under the same roof for an entire week?

As I glanced up at the framed Judy Garland albums hanging above my bed, a more terrifying question raced across my mind: What wouldn't we talk about? At 28-years-old, I still hadn't come out to him.

When we were younger, despite our two-and-a-half year age gap, strangers often asked if we were twins. This common misconception may have been perpetuated by my mother's affinity for dressing us in matching outfits -- the only difference being his Popeye suspenders were red, while mine were yellow.

Once we were given more of a say in our wardrobe, however, it became clear we had different tastes. My brother's pajamas, for example, were G.I. Joe. A muscled soldier with an AK-47 ran across the chest of his shirt, backlit by the orange and yellow glow of a detonating explosive.

My pajamas on the other hand: a footed onesie designed to look like I was wearing Wonder Woman's outfit. The arms and legs were flesh-colored, giving off the illusion I was wearing only a red bustier and blue bikini bottoms with white stars.

Needless to say, when I came out to the rest of my family in my early 20s, no one was shocked. The fact that I was gay shouldn't have been a surprise to my brother either. After all, we had adjacent bedrooms and my high school years were spent wearing out the soundtracks to Rent and Jesus Christ Superstar. (And although listening to Broadway musicals might not have been enough to prove that I was gay, belting out Mary Magdalene's torch ballad "I Don't Know How to Love Him" probably was.)

While I had a flair for the dramatic and all things Broadway, my brother was built like a linebacker and obsessed with sports. And because I thought he only communicated in one-word answers and grunts, like a caveman, I was too afraid to come out to him. So I never did.

When I moved to New York at 25, I figured I had successfully avoided us ever having to have "the talk." But now, three years later, he was coming for a visit. I knew I could no longer hide who I was. And I didn't want to. I was in my first serious relationship and I wanted my boyfriend to meet my entire family, including my brother.

In the months leading up to his visit, I gave myself daily stress ulcers wondering if I should pick up the phone and tell him. I kept finding reasons not to: I shouldn't have to, he already knows, we're just too different. I told myself that coming out was something that should happen in person, face-to-face. It was a good excuse to hide behind -- until I found myself at JFK airport, waiting to meet my brother and his wife at the baggage claim.

With the three of us crammed into the backseat of a yellow taxi, my brother and sister-in-law thought we were headed to my place in Brooklyn. It was their first time in New York and they had no idea that the address I gave the cabbie was in Manhattan. We weren't headed to my apartment; we were headed to my boyfriend's.

Zipping past the row houses of Jamaica, Queens, we made small talk about their flight. But between complaints of obese seat partners and the lack of free peanuts, a panicked voice crept into my head.

What are you waiting for? It shouted. You have to tell them. Now!

A second voice, sassier than the first, also weighed in on the matter.

No way, gurrl! You can't come out to them with some cabbie listening in. Chill!

The two voices fought back and forth as we crossed over the Triborough Bridge and crawled our way through Manhattan's midday traffic. I had warned my brother and sister-in-law ahead of time that I lived in a very un-gentrified area of Brooklyn that was "a lot safer than it looked." They were expecting to step out of the taxi and see something that resembled the set of the TV show The Wire. Instead, they were greeted by the high rises of Columbus Circle. My brother gave me a confused look as we exited the cab.

"This doesn't look so bad," he said, eyeing the Fresh Direct truck parked in front of a Starbucks. I knew I couldn't stall any longer.

Like a special effect from a Matrix movie, time came to a halt. The three of us stood at the curb, suitcases at our feet, not knowing what to do or say next. I adverted my eyes towards everyone's shoes. My sister-in-law was wearing clean, white Keds that had yet to be touched by the City's filth.

The silence hanging over us was finally gutted when my sister-in-law asked: "Great, does that mean we get to meet him?"

When I looked back up, she was smiling. So was my brother. I wanted to laugh. That was the reaction I had been afraid of all those years?

That afternoon my boyfriend and I took my brother and sister-in-law to the Metropolitan Museum of Art, bought them authentic slices of New York pizza, and let them experience firsthand what it felt like to wait on a crowed subway platform during the hottest week of July. They loved it.

And as it turned out, my boyfriend wasn't the only person they met that day. They also met the real me. My coming out didn't alienate us further like I originally feared it would. Instead, it gave us more to talk about. My brother asked questions like, "How did you guys meet?" and "How long have been together?" And I gave him answers, no longer shutting that part of myself off to him.

Around the time my brother became a dad, I felt like I got meet the real him too. The man I had once assumed only showed emotion when watching college basketball, was now silly and affectionate with his two little girls. I was happy to have been wrong about him.

When I went home for Christmas recently, my brother was the one to pick me up from the airport. As we drove down the snow and slush-filled freeway, he warned me that his oldest daughter was starting to ask questions.

"After I read her a bedtime story the other night," he informed me, "she turned to me and said, 'Daddy, why don't Uncle Brian and Uncle Danny have a girl in their family?'"

I smiled and imagined my brother's answer. I pictured him tucking his daughter into bed, brushing back a loose strand of her hair as he gently explained that sometimes two men could love each other; and that there was nothing wrong with that.

My brother interrupted my fantasy with his actual response: "So I told her, that's a good question, sweetie. Why don't you go to bed and you can ask your mom in the morning."

My smile grew bigger. I had put off telling my brother I was gay for as long as I possibly could. If he was taking his time in telling his daughter, maybe weren't so different after all. 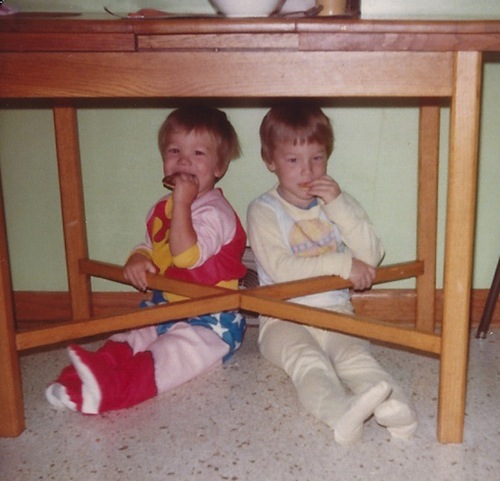