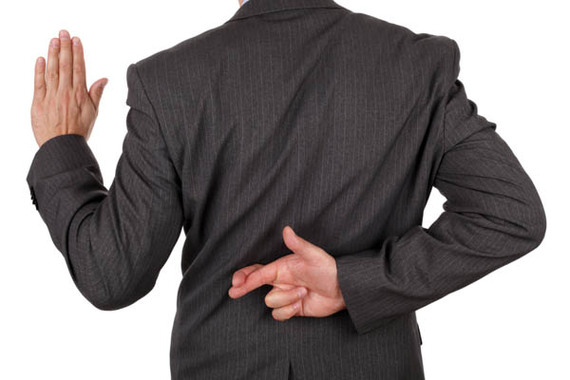 It would be inaccurate to say that American Airlines lied to Kori Conley's friend when she tried to fix her airline ticket.

She needed to get home for Christmas with her kids, but someone else was paying for her ticket and they'd bungled the reservation, confusing the origin and destination airports on her itinerary.

"My friend called immediately -- we're talking right away -- to let them know the error," says Conley. "They in turn told her there would be a $200 per ticket fee -- an extra $600 to fix three tickets."

It would also be inaccurate to say the American Airline representative who Conley's friend talked to told her the whole truth. See, under the Transportation Department's 24-hour rule, she could have canceled her flight and made a new reservation at no charge.

Did the rep fail to mention that? Yep.

Half-truths, or lying by omission, are an epidemic in American business, and particularly in travel. And it's infectious. Customers also occasionally leave out important details to bolster their case, and so do the people covering the industry.

Some of my least favorite customer complaints involve a blatant half-truths. I seem to be getting more and more of them lately. An angry consumer will send me a written complaint in which a key detail is left out -- or even deleted from an email thread -- to make a case against a company look more compelling.

Customers are notorious for doing this in response to car rental damage complaints. At first blush, it'll look as if a big, bad claims company is coming after a renter for damage that they couldn't have possibly done. And I have to tell you, when I see these grievances, I get upset. But then, when I ask about the case, it turns out there are timestamped photos of the damage, irrefutable evidence that the vehicle was in a serious accident.

Of course, half-truths are told by more than just consumers. Sometimes, consumer advocates like me are accused of the same misdeeds. It's true, we're not stenographers and we have an angle (that's why they call us advocates).

In a recent series of stories about the diminishing value of an airline credit, for example, I was charged with omitting important information about the economics of running an airline. If, one critic said, I could only help people understand concepts like "perishable commodity" (the idea that once a plane takes off, the seat can't be resold) and "missed opportunity cost" (the concept that passengers should pay not only for their ticket, but should also compensate an airline for the missed opportunity to sell another ticket) -- well, then people would understand why we had these ridiculous ticket rules.

I'm happy to refer these critics to a handful of blogs written by industry cheerleaders who do a fairly good job of explaining the economics of the airline business. But I still can't understand why all those charts and Photoshopped images fail to persuade the average customer that airlines aren't trying to rip us off.

Truth be told, I have a problem with the half-truths these other bloggers sometimes tell. For me, the worst errors of omission come at the end of each post. You know, that "sign up now!" ad for an affinity credit card?

If the disclaimer was completely honest, it would say: "I am going to earn more than $100,000 this year from referral fees paid by this credit card. In exchange, I will write flattering stories about the loyalty lifestyle and I will downplay any risks associated with participating in a program. As a matter of fact, this blog would not exist without this clever affiliate program ad."

Yeah, that'll be the day.

Conley's story has a happy ending. I sent him some information about the DOT 24-hour rule, which he passed along to his friend.

"My friend got all her money refunded because of your help," he says. "I can not thank you enough."

After you've left a comment here, let's continue the discussion on my consumer advocacy site or on Twitter, Facebook and Google. I also have a free newsletter and you'll definitely want to pre-order my new, amazingly helpful and subversive book called How to Be the World's Smartest Traveler (and Save Time, Money, and Hassle) Photo: Brian Jackson/Shutterstock.