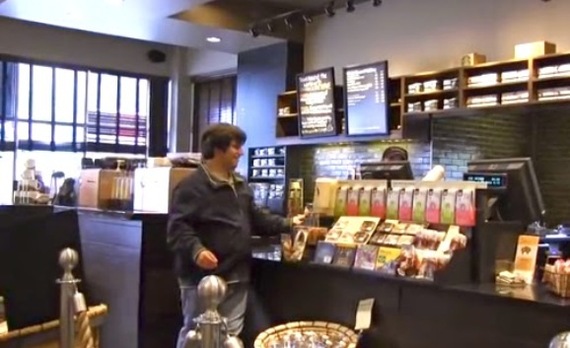 Accommodating people with disability isn't that hard; it's partly about putting in effort but mostly, it's about having the right attitude, as this story shows.

When Aaron Seldomridge first visited a Starbucks in Ephrata, Pennsylvania, he was with his mom, Janiece. Aaron has autism and Janiece asked barista Anisa Dujnic if they had a picture menu. Yes, they did. Anisa and Janiece helped Aaron to point to an image of an iced grande chai and repeat the words. A few weeks later, Aaron went to the counter with his mom and placed his order without the menu. And then, he started putting in his request -- and paying for it -- on his own.

Because Aaron was in an environment in which he felt encouraged and comfortable, he was confident enough to go it alone. "It's great steps for him to take as a person," Anisa said.

Really, it didn't take much, just a little attention. Some customer customization--no more than goes into making, say, a mocha frap.

Stories like this make you wonder why accommodating kids and adults with disabilities seems like such a big deal to some people. Yes, on the surface this is just about serving a drink, which doesn't take a whole lot of effort.

But at its heart, as special needs parents like me know, this isn't "just" about a barista going the extra mile. It's about a mindset: The readiness to give extra assistance to someone who needs it. The openness to working with the person with disability or a parent to figure out what can help. The willingness to find another way. The patience for letting things take their course. And the pure humanity of celebrating another person's success.

I'd say this story is the exception, not the rule, in terms of attitudes toward welcoming people with disabilities. I know this firsthand from experiences with my son, Max, who has cerebral palsy -- most recently, the program coordinator who flat out refused to accommodate him. Even within the Starbucks world, with its typically welcoming atmosphere, it boils down to individual mindsets (despite what the law might say); at one Starbucks in Brighton, NY, a woman with a brain injury who has a service dog said she taped an employee telling her that she could not come in with her dog.

Welcoming and accommodating kids and adults with disability should be a natural, organic part of society.

This post originally appeared on Love That Max. More from Ellen Seidman:

• I don't mean to hurt people with disabilities even though I call them stupid, people say

• My kid with special needs understands you, so don't ask me--ask him

• The life skills more kids with special needs should learn