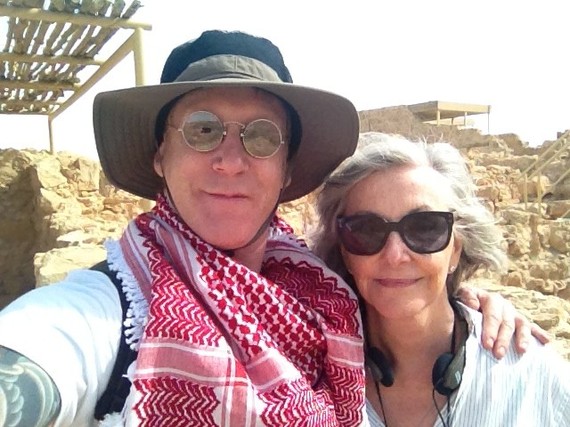 Prior to my recent trip to Israel with my mother, Masada was less of an actual historical and spiritual reality and more of a mediocre 1981 ABC TV movie starring a bewigged Peter O'Toole in the post-Raid on Entebbe cascade of Jewish-themed network programming. I'm happy to report that since my visit, I know a lot more about Masada the place than Masada the movie (though they did film parts of the mini-series at the real Masada). I'm also glad to report that mom and I appear to have anticipated a media resurgence for the ancient fortress; last week the Smithsonian Network debuted theirSiege of Masada documentary and, just in time for Passover, CBS debuts their Masada mini-series The Dovekeepers on Tuesday night. Masada is officially a trending ruin.

For those of you who may have forgotten the O'Toole film or missed the last week's documentary, Masada is an ancient fortress located between the Dead Sea and the Judean desert. According to Wiki: "Herod the Great built palaces for himself on the mountain and fortified Masada between 37 and 31 BCE. The Siege of Masada by troops of the Roman Empire towards the end of the First Judean-Roman War ended in the mass suicide of the 960 Jewish rebels and their families holed up there." 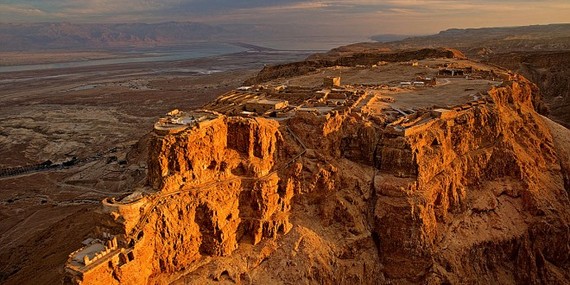 Though that sounds a bit academic, there is nothing at all dry or boring about Masada. Herod's temple is breathtaking in scope and scale. Believe it or not, this was actually the second house of King Herod that we visited; we had visited Caesarea the week before. I have now seen more of King Herod's dwellings than I have of some of my friends. Herod was an early example of what is nowadays referred to as a "snowbird"; he stayed in Caesarea in the North during the summer and traveled to Masada in the South during the colder months. This can also be referred to as a "splitter," as in "he splits his time between his two homes." Who knew that Jews have been doing this for thousands of years?

At one point during our visit, I wound up in the middle of a group of non-Jewish American tourists from Alabama. One of them, who must have thought she was very clever, turned to me and asked, "So do you know John Lennon?" -- referring, I suppose, to the fact that I was wearing round glasses. Looking across the desert to the Dead Sea, I thought for a moment and replied, "Yes, but not in the Biblical sense." As their exasperated tour guide endeavored to move the turgid group along, I decided to stick with them for a few minutes, not to partake of their southern hospitality, but because their dashing Israeli leader looked like Jean Dujardin, the Oscar-winning actor who starred in The Artist. Though I was just a stone's throw from the Dead Sea, I myself felt suddenly more alive.

A few minutes later, my new friends and I moved to the palace's giant bathroom, which utilized a surprisingly sophisticated system of tiles and heated water to create a sauna and multiple bathing pools. Though I pretended to be fascinated by the technical aspects of an ancient, royal comfort station, I was, in fact, much more interested in the opportunity to stare at the handsome tour guide without seeming creepy. I was pulled out of my reverie when a middle-aged woman stopped taking pictures and, impressed with the washroom's ultra-modern accommodations, turned to her friend and joyfully exclaimed, "My goodness, Cecile, the Jews really thought of everything, bless their hearts!"

But I suppose my favorite moment came a few minutes later when, after bidding a silent goodbye to my new friends from Alabama and reluctantly peeling myself away from their charismatic leader, I rejoined my mother. In her defense, she was a total trouper; she has an extremely bad back and we had her walking in the hot sun, literally for miles across vast, rocky expanses, up and down pathways to the different levels of the palace, and down steep stairways into cavernous cisterns. This might explain the moment when, slightly disoriented and perhaps believing she was talking to a realtor at an open house in Manhattan and not in the middle of the Negev Desert, she turned to our tour guide and said with complete sincerity, "So tell me again, how big is the property?" Bless her heart!