When Republican presidential candidate Mitt Romney asserted that federal low-income programs are administered so inefficiently that "very little of the money that's actually needed by those that really need help, those that can't care for themselves, actually reaches them," my colleagues at the CBPP got to work on this graph. 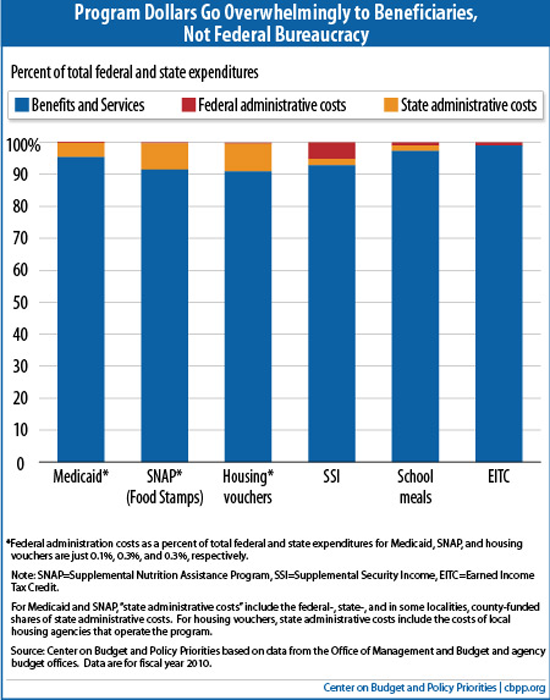 Gov. Romney is singing from the same playbook as Rep. Paul Ryan along with a litany of conservatives whose goal for years has been for the Federal government to shed the responsibility for Medicaid, food stamps (SNAP), low-income housing, and so on. Once you "block grant" these functions to the states, it's easier to cut them. And remember, this is from a candidate (and the same is true for the House Republicans' budget) that wants to cut taxes deeply for the richest households.

So he's launching his attack based on inefficient administration -- the claim that most of the dollars don't reach the clients. Trouble is, the facts got in the way.

Many people argue that Gov. Romney is the reasonable Republican candidate... you might not love his policies, they tell me, but he's not known for making stuff up, for repeating outrageous statements with no basis in fact.

OK, let's see -- if he keeps repeating this falsehood, then they're wrong.

I know these are dark times for substantive debate, but there are people out there to whom facts still matter and they need to know when someone asking for their vote is trying to mislead them.