When I was a younger woman, I donned leather pants, white ribbed tanks and high-heeled black boots. I'd take off most weekends to meet women at lesbian dances in Boston. I was slim and fit because I worked out. I learned how to flex my muscles without looking as though I was flexing. This is how I met girlfriends-to-be: with a dash of egoism and a sexy outfit.

I attended these dances to validate myself as an attractive woman, measured by how many women wanted to talk with me, dance with me or get my phone number. I'm embarrassed now to admit how shallow my motives were, and that such a superficial validation was so important to me, but it was -- and for a long time.

But times have changed.

I'm in my early 50s, and I don't wear leather pants anymore. Although I'm still in good shape, I eat too many cheese puffs and red velvet cupcakes to fit into any leather-hugging trousers. I don't wear heeled boots either, due to a nerve condition I have between my toes. Recently I took delivery on three pairs of "Grasshopper" shoes. These are sensible and very comfortable tie shoes for a woman who no longer is trying to impress anyone. 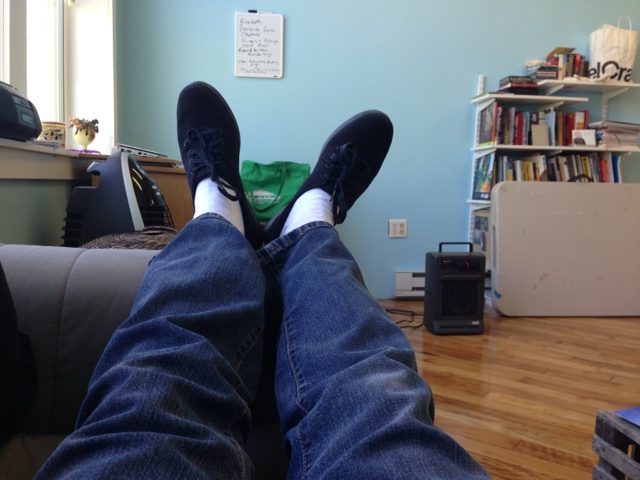 Me in my writing studio, wearing white socks and Grasshopper shoes

I realize I am no longer bringing sexy back, but I'm bringing something else these days, something more important: a wider perspective on the LGBTQ community.

For example, my views on Michfest have evolved. Those of us of the 1980s coming-out era know it as the Michigan Womyn's Music Festival, and in those days the featured singers were Holly Near and Ferron and Cris Williamson, among others. Today, there is controversy as to what kind of woman should be allowed in -- whether trans women should or should not be welcomed. The Indigo Girls plan an onstage protest of this womyn-born-womyn-only policy.

Once, I would have agreed with the only-born-as-a-woman policy and said, "No, if you still have a penis or an Adam's apple, you are not a woman, and therefore you are not allowed into MichFest." Now I find such a view as embarrassing as my leather pants. One reason for such an event is to end the isolation of a group of people who have been kept down in society. Who could be more isolated than a male-assigned person who is really a woman -- transsexual or a woman in transition who has always felt like a woman but has never been welcomed into the women's communIty? I believe that anyone who identifies as a woman should able to attend. We must be more open-minded about what we mean by "woman." Gender is no longer "bifurcated," as the intellectuals might say, and it can be very complex.

Other things have changed over the decades. In the 21st century, so many (r)evolutions in thought and technology have allowed me to be out in numerous ways that I felt unable to be in the 20th century. I'm writing blog posts about being gay on The Huffington Post, for example. There was no Huffington Post way back when. Here I have a forum to talk about whatever I want as a gay woman, whereas once I felt that I could not even say the word "lesbian." I have Twitter and Facebook accounts, a Wordpress blog and a regular gig with lesbian.com to talk about gay issues. I don't take this for granted. If having to reach my 50s and move into comfortable shoes is the price I've had to pay to get to this place of expressive freedom, so be it.

My feelings on pride parades have changed too. Years ago I was embarrassed by the parades -- by the parading -- with lesbians going topless and the men in full flame. I used to think, "Flaunting it is no way to garner support from the rest of society." Even when you're gay, you can still carry mainstream homophobia within you, and that's exactly what I did in my leather pants and heeled boots. I thought we needed to "please" the rest of society in some way in order to gain acceptance.

Now, in my looser-fitting blue jeans and comfortable shoes, I'm more of a mind to say, "Go eff yourself, and let us be what we are." I now realize that we need to flaunt our identities just to remain visible, and pride parades are vehicles for that to happen annually, and all around the world! We need to play up the shock value until we are accepted wholesale into society, with full rights and full love.

As I've shed my sexy boots, so too have I shed my narrow-minded views on the queer community and let go of my own socialized homophobia. I may not be bringing sexy back with my new dress style, but I'm bringing back something much more important: a wider and more encompassing perspective that I couldn't have attained until I'd had time to grow into middle age. Maybe I don't look so cool now, but I am so much cooler than I was in those boots.

Do you recall a time when you had to fight off your own brand of queerphobia? I'd be interested to hear your story.

A version of this blog was first posted on Lesbian.com.