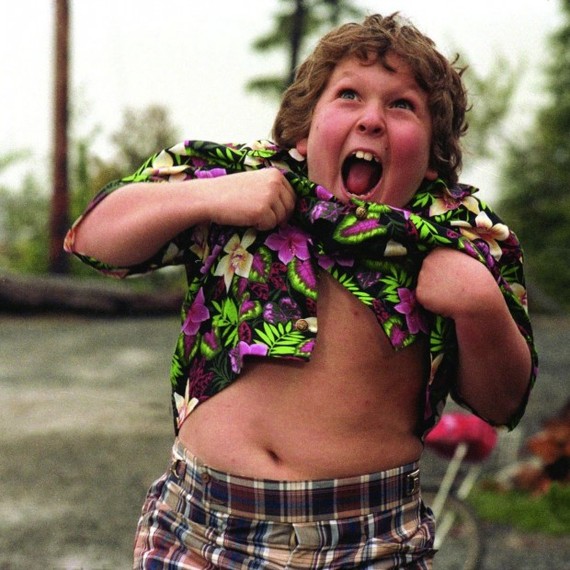 Last week at a Bon Appétit editorial meeting, someone casually mentioned that a sequel to The Goonies, the beloved movie about quirky, lovable, treasure-seeking kids, was in the works. I had never seen the 1985 classic, but listened in as my colleagues waxed poetic about their love of the film.

Since this is a food publication, much of their talk swirled around how much Chunk (Jeff Cohen) consumes throughout the film -- apparently, a lot. It was decided that, for my own personal emotional development, I would have to watch the film closely and count each and every one of Chunk's culinary escapades. I vowed to be vigilant.

So, last night, that is what I did. Before starting the film, I shot off a quick email to my editor -- what was the name of the character I was supposed to be watching? I had forgotten. He wrote back in one word: Chunk.

Our first food sighting! Chunk's playing video games at an arcade when a high speed chase whips by. In his excitement ("Oh, a police chase!") Chunk runs to the window and slams his pizza -- which looks very heavy on the tomato sauce -- and jostles his cup, spilling milk all over the glass, and himself. Chunk is upset. I would be too. Now, I must note here it seems a milkshake would be the obvious beverage of choice. I rewound the DVD four times, and can safely conclude that if it is not indeed a cup of milk, it is a very poorly made shake.

Okay, we are introduced to a character named Mouth (Corey Feldman -- awesome), who rolls up to Mikey (Sean Astin) and Brand's (Josh Brolin, looking fine as ever) house with a can of Pepsi in hand, then helps himself to a handful of chips. I feel conflicted about whether or not I should include this in the roundup, as it's not explicitly Chunk. But it feels... important.

The truffle shuffle. I have heard about this, and now I understand it. There are neither ganache-covered chocolates nor foraged fungi; the only shuffling is of Chunk's ample belly. I know it's meant to be cruel, but kid pulls it off.

Chunk's relaying the story of the police chase to the gang -- but no one seems to believe him because Chunk is apparently a pathological liar. "I bet it was even more amazing than the time you ate your weight in Godfather's Pizza," says Mouth. Well, I personally believe him.

"You know, I think they made me lose my appetite."

"Oh God, am I depressed," Chunk mutters as he squirts canned whipped cream directly into his mouth. Good to know we're not the only emotional eaters around here.

SEE MORE: 10 Celebrities Who Are Obsessed With Cheese

00:25:44 Chunk is worried about his eating schedule

"Now I'm gonna be late for dinner, and my mom's gonna yell at me. And she's not gonna let me eat my dinner, and she's gonna punish me."

"Anybody got a candy bar? A Baby Ruth?" I am disappointed by this, because I have always found Baby Ruth candy bars to be unsatisfyingly dry, and would almost always choose a Snickers over one.

"Soda pop! Oh boy, am I thirsty!" And then, upon finding the vending machine empty, "Damn it." It is a Pepsi machine, and I am starting to realize which soft drink manufacturer bought product-placement rights to this film.

00:32:47 Chunk makes a brilliant food reference
In a flurry of anxiety, Chunk describes a car as having "bullet holes the size of matzo balls!"

"Mikey, come on. It's dinner time, our parents are worried..."

Sloth (John Matuszak) growls in the distance, and poor Chunk gets blamed: "Chunk, I hope that was your stomach," says Stef (Martha Plimpton).

As Mikey tries to dig for the buried treasure, Mouth suggests: "Listen, why don't we just pour chocolate all over the floor and let Chunk eat his way through!" Mouth, you are officially a bully.

00:43:18 Chunk discovers a freezer in the abandoned restaurant

The bad guys -- the Fratelli family -- have nabbed Chunk and begin interrogating him. "And my mom sent me to this summer camp for fat kids and then once during lunch I got nuts, and I pigged out, and they kicked me out."

SEE MORE: The Best Cooking Tricks We've Picked Up Over the Years

This scene is gold. Pure. Gold. Sloth literally breaks his chains OUT OF THE WALL to collect a Baby Ruth that has fallen on the floor. Essentially, how I feel every day at about noon. (Also, wait. Chunk had that in his pocket all along? I will suspend my disbelief and assume he had forgotten about it until this very moment.)

Sloth is feeding Chunk the Baby Ruth. There is much kissing (from Sloth) and crying (from Chunk). It feels, still, important to the development of their relationship.

I've heard that this is kind of an epic scene. I now understand why. And I want ice cream.

It's been ages since we've seen or heard Chunk salivate over junk food. I'm getting worried. Is he okay? Scared? Hungry?

Well, geez. That was a thrilling couple of hours! (Spoiler alert!) Treasure has been collected, the bad guys have been captured, and the Goonies have been rescued. Chunk's mother is there to greet him, on the beach, with a box of "Domino's Pizza, your favorite!" I feel happy for Chunk. I feel relieved.

What I ate while watching this movie: Two glasses of rosé, half a kabocha squash, an entire head of kale (I am not ashamed), and a handful of pecans.