Jonathan Safran Foer brilliantly twisted the English language into delightfully strange sentences in his 2002 debut novel Everything Is Illuminated, spouting much of his story through the comically garbled voice of a Ukrainian translator named Alex who sounds like he's swallowed a thesaurus. Or as Alex puts it in the first paragraph: "Mother dubs me Alexi-stop-spleening-me!, because I am always spleening her." Foer's novel, featuring a character who also happens to be named Jonathan Safran Foer, also tells a moving story of tracing family roots and discovering some of World War II's acts of good, evil and in between.

Much of what made the book so splendid got lost in translation when Liev Schreiber wrote and directed the 2005 film version. In many ways, it's a faithful adaptation, but there simply isn't enough of Foer's beguiling language -- the words on the page.

Playwright Simon Block does better with his stage adaptation, now receiving its U.S. premiere at Next Theatre in Evanston, under the direction of Devon de Mayo. In this version, the Alex character speaks directly to the audience, delivering both dialogue and narration in Foer's daft syntax. Alex is an odd fellow who seems very impressed with himself -- at the moments when he isn't assuming the defensive crouch of a wounded child. He inspires some of the same sort of laughter as Sacha Baron Cohen's Borat character -- a guy talking in a funny accent and making crude remarks -- but he's ultimately a sympathetic figure, and actor Alex Goodrich plays him with a great range of feeling. 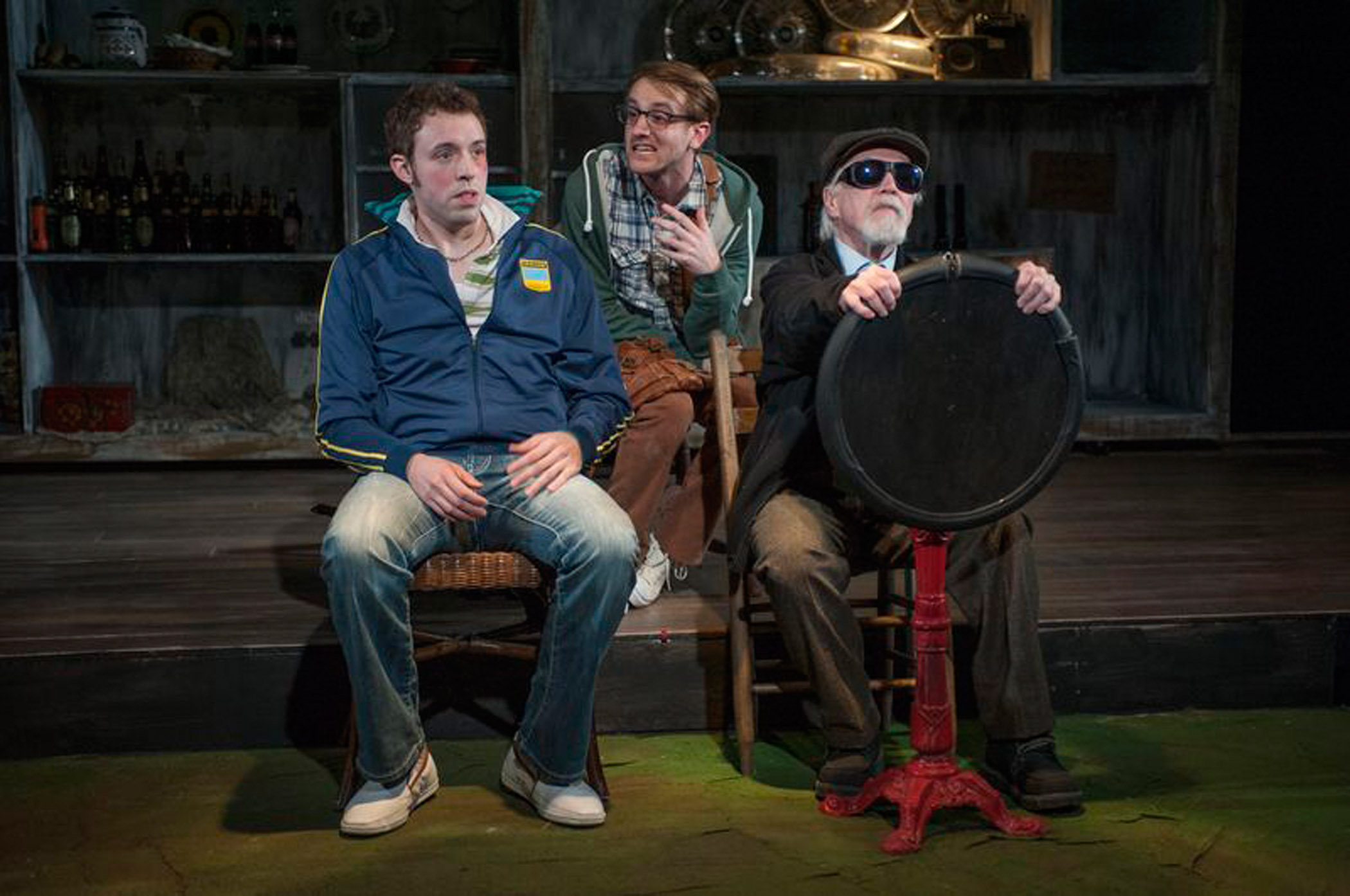 Photo: From left, Alex Goodrich, Brad Smith and William J. Norris in Everything Is Illuminated at Next Theatre. Photo by Michael Brosilow, courtesy of Next Theatre.

Brad Smith plays Jonathan, who's visiting Ukraine is search of the town where his ancestors lived at the time of the Holocaust, with all of the questing spirit his character requires -- as well as lots of exasperation over the slapdash quality of the assistance he's receiving from translator Alex and his grandfather, who's driving the car despite having atrocious eyesight.

William J. Norris plays the grandfather without adding any Slavic inflection to his voice, which is a little jarring at first, especially when juxtaposed with Goodrich's delicious tones. Norris, however, does give an emotional and riveting speech near the end of the play; perhaps he'll find surer footing in Act 1 as the play's run continues.

Like the film version, this stage adaptation puts less emphasis on the back story about Foer's ancestors, but the historic tale emerges through a few key scenes featuring two nimble performers, Sasha Gioppo and H.B. Ward. This telling of Everything Is Illuminated makes it clear that the Jonathan character is imagining what happened hundreds of years ago. As the storyteller, he faces a wrenching decision on how much tragedy his characters must endure.

Once the play's travelers find an old woman (Ann Whitney) who seems to hold the secret knowledge of what happened to Jonathan's family in the Holocaust, Everything Is Illuminated turns from a comic escapade into a heart-stopping drama on the lasting wounds inflicted by human cruelty. It's quite moving to watch Whitney's persuasive and natural performance as a woman haunted by memories from half a century earlier.

Block's stage version of Foer's novel might still benefit from a few tweaks, but it captures much of what made the book so compelling and even adds some intriguing new angles on the stories.

Everything Is Illuminated continues through March 31 at Next Theatre, 927 Noyes St., Evanston. For tickets and details, see nexttheatre.org.