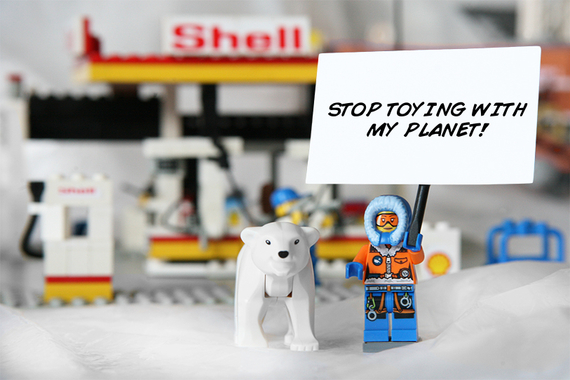 LEGO holds a special place in the hearts and minds of children and families around the world. But everything is not awesome in LEGOland. LEGO is partnering with Shell on a global advertising campaign that includes co-branded toys, billboards, celebrity endorsements, videos, and a full-size LEGO Formula One car.

Using toys to advertise any kind of product to kids is wrong. But it's particularly harmful to sell children on Shell, a company with a shameful environmental record that plans to drill for oil in the Alaskan Arctic, one of the most vulnerable places on earth. That's why Greenpeace and the Campaign for a Commercial Free Childhood are calling on LEGO to stop working with Shell.

By branding its toys with the Shell logo, LEGO is helping Shell build social capital with adults while cynically building brand loyalty with children. Toys profoundly influence children's desires, values, and aspirations. LEGO's myriad young fans dedicate time, energy, and love to the brand, forming an emotional attachment that can last a lifetime.

Co-branding with LEGO is an opportunity to build what marketers call "cradle to grave" brand loyalty for Shell. And that's a frightening thought. Research shows that if you secure brand loyalty when children are young, those positive feelings last into adulthood. Brand loyal customers are less likely to think critically and independently about a company's practices and ethics, which is particularly troubling with a company like Shell that has such environmentally destructive plans for the future.

The global oil giant wants to exploit the melting sea ice to drill for more of the oil that's causing global warming in the first place. Shell first tried to drill in the Alaskan Arctic in 2012, but a series of accidents and mishaps (including the grounding of their 14,000 ton drill ship off of Kodiak Island) led the company to abandon its plans. Shell plans to return to Alaska in 2015, despite dire warnings from scientists around the world that an Arctic oil spill would be catastrophic, and that burning the fossil fuels they might find there will contribute to the Arctic becoming completely ice-free by as early as 2016.

Branding children's play undermines their creativity and their capacity to develop their own ideas and world view. What's particularly pernicious about this partnership is that Shell is undermining children's future capacity to think critically about where and how Shell drills for and markets fossil fuels. Those policies are a threat not just to fragile environments like the Arctic, but also to the rest of us affected by catastrophic climate change.

According to the Guardian, Jørgen Vig Knudstorp, the president and chief executive of Lego, has said: "as we expand globally, we are determined to leave a positive impact on society, and the planet that our children will inherit." Perhaps that's one reason LEGO recently released its 2014 City Arctic Sets, complete with ice blocks and polar bears. But it's the height of hypocrisy for LEGO to celebrate the wonder and beauty of the Arctic while simultaneously promoting a company that threatens its future. If corporations like Shell continue to recklessly pursue fossil fuels in more remote and dangerous places, the next generation of LEGO fans may still be building their own miniature Arctics, but the real one will be gone.

You can help stop this partnership by joining us to Save the Arctic now.